I see the police in Turkey have caught the man they believe carried out the attack on the Reina nightclub in Istanbul on New Year’s Eve. He appears to have spent the interim period at a bare-knuckle boxing gym: 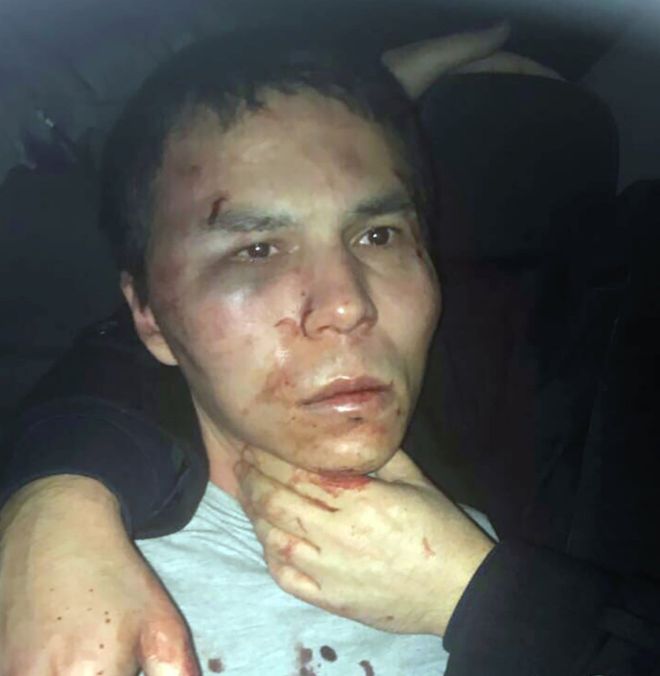 Abdulkadir Masharipov is believed to have mounted the assault on the Reina club which left 39 people dead.

The Uzbek national is said to have been caught in Istanbul’s Esenyurt district.

Uzbek, you say? So not an Uighur, then? Didn’t think so.

There had been fears that the gunman had managed to escape Turkey, perhaps to territory held by so-called Islamic State, which said it was behind the attack.

I must say, this surprises me a lot. One of the features of al-Qa’eda and ISIS-driven gun attacks and bombings is that the perpetrators treat it as a suicide mission and don’t make much of an attempt to escape. The Charlie Hebdo gunmen fled initially but fought to the death when cornered in a warehouse; the Bataclan attackers died at the scene; the Nice lorry driver was shot to death in the cab. The policeman who murdered the Russian ambassador in Ankara didn’t seem much interested in getting away either. The inability to capture these people alive after an attack is what makes ISIS-inspired terrorists so dangerous because, as the Western films taught us, dead men can’t talk.

The guy who drove the lorry into the Christmas market in Berlin on 19th December broke the trend by fleeing Germany to Italy via France, and only got shot and killed when policemen in Milan asked him his identity during a random stop in Milan. Where he was headed is anyone’s guess. And now you have this Uzbek fleeing the scene of the crime and attempting to lie low instead of remaining in the club and making the victim count as high as possible until his ammunition runs out or the police kill him. You’d have thought that if he was intending to escape he’d have got the hell out of Istanbul and over the border into Syria somehow, but he seems to have stuck around. This might be because the Turkish security forces are so efficient they sealed off the entire city and closed the borders so tight nobody could slip through, but I’m a little skeptical of that.

My theory is this: ISIS are finding it more difficult to recruit suicidal fanatics and are having to use slightly less fanatical people who are happy to carry out an atrocity but not so keen on committing suicide in the process. The Arab-speaking world has at this point a lengthening history of supplying suicide attackers, but Uzbeks aren’t generally known for it. Ethnic Uzbeks fought in Afghanistan, switching loyalty between various sides under the leadership of Abdul Rashid Dostum, but in a manner more akin to tribal self-interest than the religious fanaticism shown by the mujaheddin and later the Taliban.

There are certainly religious fanatics in Uzbekistan however, but their numbers and capabilities are often exaggerated either by westerners through ignorance or locals for political convenience. Following 9/11 the president of Uzbekistan, the late Islam Karimov, established his pro-Western credentials with the United States by allowing them to use the Karshi-Khanabad airbase in the south of the country to attack targets in Afghanistan. He also promised to root out extremist elements in Uzbekistan which pleased the US, only he used this as cover to crack down on his domestic political opponents who had nothing to do with Islamic terrorism, earning his government a reputation as a serial abuser of human. Eventually the complaints got so bad the relations between the two countries soured.

My guess would be that ISIS has successfully recruited a few thousand Uzbeks to their cause but their levels of fanaticism and commitment are questionable, at least in comparison to their Arabic comrades.

Police reportedly found the suspect along with his four year-old son at the home of a Kyrgyz friend in the city. Turkish media say that his friend was also detained, along with three women.

This surprises me as well. Despite being close neighbours and sharing an insanely complicated border which completely (and deliberately, thanks to Stalin) dissects ethnic groupings, Uzbeks and Kyrgyz are widely different peoples. The main difference is that Uzbeks are Turkic people who are settled, meaning they live in towns and villages. The Kyrgyz, like the Kazakhs, are traditionally nomadic and more akin to Mongolians. From my own experience and readings, Uzbeks tend to be more aggressive and take their religion a little more seriously. You rarely hear of Kazakhs or Kyrgyz throwing their lot in with al-Qa’eda or ISIS, although no doubt some do. My guess would be they’d number in the low thousands at most, if that.

Despite their common Soviet history, the Uzbeks are hardly natural allies with the Kyrgyz and Kazakhs. In September 2015 I attended an Uzbek wedding near Shymkent in Kazakhstan, close to the border with Uzbekistan. The town of Shymkent is 14% Uzbek, and the village where the wedding took place was pretty much 100% Uzbek. I noticed that there were a few ethnic Russians at the wedding but no Kazakhs; and I happened to be in the venue of a Kazakh wedding the day before and didn’t see any Uzbeks (after a while you can tell them apart by looking at them; of course the locals can do this from a mile away). I asked my friend, who was the one getting married, if there is much mixing between Uzbeks and Kazakhs and he said there wasn’t. You occasionally see some mixing with the Russians and sometimes the Korean minorities, but not between Uzbeks and Kazakhs. I’ve not been to the Ferghana Valley region where Uzbekistan borders  Kyrgyzstan, but I would guess much the same thing applies there.

Ethnic tensions between Uzbeks and Kyrgyz came to a head in 2010 when the two groups clashed in the Kyrgyz cities of Osh and Jalal-Abad, leading to around a thousand people being killed and over a hundred thousand displaced during the fighting and the aftermath. In short, the Istanbul gunman hiding out at the home of his mate appears to be a rare case of Uzbek-Kyrgyz cooperation rather something to be expected.

One would hope that now the Turkish authorities have captured him alive we’ll find out some answers as to who he was working for and his motivations. I doubt they’ll get much useful information out of him regarding ISIS as a whole, if it was indeed they who put him up to it. They’d have known he wasn’t keen on dying at the scene and as such wouldn’t have given him any information that wasn’t pertinent to the job in hand, and as an Uzbek of questionable commitment he would unlikely be included in high-level meetings. I don’t know what methods the Turks use to extract information from foreigners who have murdered 39 people in Istanbul nightclubs, but I suspect he’ll spill whatever he has and then some. Whoever is in charge of the translating might want to spend the day brushing up on Uzbek phrases such as “Please take these crocodile clips off my bollocks!”

Remember the days when the likes of Craig Murray were claiming that:

As seen from Tashkent, US policy is not much focussed on democracy or freedom. It is about oil, gas and hegemony. In Uzbekistan the US pursues those ends through supporting a ruthless dictatorship. We must not close our eyes to uncomfortable truth.

… US firms were contracted to build a pipeline to bring central Asia’s hydrocarbons out through Afghanistan to the Arabian sea. That strategic interest explains the recent signature of the US-Afghan strategic partnership agreement, as well as Bush’s strong support for Karimov.

Well, it was bollocks then and is bollocks now, especially given that the US subsequently reduced the amount of foreign aid to Uzbekistan, became openly critical of the Karimov regime to the extent the US was ordered to leave, and no move by a major US company or US government official was ever made on the Uzbek oil and gas market, including the building of pipelines.

So I wonder if Murray and his ilk are going to change the record, go strangely silent, or simply ignore current events and continue to lambast the US in light of recent developments concerning Uzbekistan:

Gazprom boss Alexei Miller will travel to Uzbekistan today to try to gain control of the country’s biggest gas fields in return for Moscow’s political support, according to Russian media reports.

In a report published today, Moscow-based financial daily Kommersant newspaper said Miller planned to secure control of the Ugra, Kuanysh and Akchalaksky fields, which would triple Gazprom’s imports from Uzbekistan from 5 billion to 6 billion cubic metres per year to 17 Bcm to 18 Bcm annually.

Kommersant added that the move, should it go ahead, would give the Russian gas giant a de facto monopoly on gas exports from the Central Asian state.

In return for the gas reserves, Russia would help Uzbekistan to deal with anti-government protests and protect it from the West, Kommersant said.

Given that Murray’s concern seems to lie primarily with promoting himself and scoring points against Western governments rather than helping the situation in Uzbekistan, I can’t see Russia being pilloried for this move.