The western media have had relatively little to say about Mexico electing an openly socialist president on Monday, other than to gloat at this aspect of his campaign:

Mr López Obrador was scathing in his criticism of US President Donald Trump during his campaign, something that analysts say won him extra votes from Mexicans angry at the insults Mr Trump had aimed at Mexicans.

The media have yet to acknowledge the catastrophe hard-left policies have brought about in Venezuela, in part because they were busy cheering on Hugo Chavez in his early days; it’s going to be interesting what mental gymnastics they perform covering this new guy in Mexico. Note that this has received very little coverage:

100 politicians murdered in the run-up to elections? I think this warrants a sturdier description than “a campaign marred by violence”, as the BBC puts it. Contrast this with the sneering which takes place when Russians go to the polls and put Putin back in office.

The fact is, Mexico is a failed state in a low-level civil war, and has been for some time. The ruling classes have reached an understanding with the drug cartels that if the former get left alone to run the capital, the latter can have a free reign everywhere else. Trump gets this, which is why he railed so hard against Mexico during his campaign, much to the annoyance of the country’s president and former president who like many others were not expecting a White House incumbent to speak the truth so bluntly.

Trump also realises how this is linked to both NAFTA and immigration. Mexico does very well out of being able to build stuff using cheap labour and flog it to the United States, as well as shift on goods imported to Mexico for the sole purpose of ending up over the border. While it may bring the costs of goods down in the US, it’s had the effect of destroying industries and employment – especially in industries which regulation has  made prohibitively expensive in the US. By relocating to Mexico, a company can halve its costs and avoid US regulations. Everyone wins, except those who’ve lost their jobs thanks to people in Washington DC and New York who would despise them if they knew they existed. And it was they who voted for Trump by the million.

The immigration issue is more serious, though:

Mexican presidential candidate Andrés Manuel López Obrador (AMLO) said Tuesday that migrants from all over the world who decide it’s “a necessity” have a “human right” to migrate to the United States.

“Soon, very soon, after the victory of our movement, we will defend migrants all over the American continent and the migrants of the world who, by necessity, must abandon their towns to find life in the United States,” Lopez Obrador said during a rally in the Mexican city of Culiacán, eluniversal.com reports.

For decades successive Mexican governments have relied on the leaky border with the US to avoid undertaking desperately-needed reforms in their own country. So long as the US can provide economic opportunities for Mexicans who support their families with remittances, there is no incentive for the Mexican government to run the place competently. In effect, a porous border and lack of immigration enforcement in the US acts as a pressure relief valve for Mexican idiocy, but it’s placing an ever-increasing cost on the US which cheap gardeners and docile maids are no longer able to offset.

Trump understood this way back in his campaign, hence the refrain about building a wall. For all those wailing at him, few acknowledge the appalling mismanagement that has gone on in Mexico from one generation to the next, but the election of Obrador is going to force this into sharp focus. If this new chap starts enacting hard-left policies as he’s promising, the numbers pouring over the border will increase exponentially regardless of whether the Mexican government is encouraging it or not. I think we’re going to see attitudes to illegal immigration in the US harden yet further, and in a few years Trump’s current stance might look almost liberal. The call for a proper border, perhaps with deployment of the military, will get louder until it’s impossible to ignore. I’d  not be surprised if this becomes the biggest political issue in the US by the 2024 presidential election. It’s ironic that the election of one of Trump’s biggest critics on immigration might well be the one most responsible for finally getting his wall built.

Michelle Obama has launched a fierce defence of the healthy eating initiatives she championed as first lady.

In thinly-veiled criticism of the policies of the new administration, Mrs Obama told the audience: “This is where you really have to look at motives, you know.

“You have to stop and think, why don’t you want our kids to have good food at school? What is wrong with you? And why is that a partisan issue? Why would that be political? What is going on?”

You know, perhaps American parents don’t want to be told what to feed their children, adopting the rather old-fashioned view that maybe they are best placed to decide? And perhaps they don’t like being lectured by a woman whose sole reason for anyone knowing her name is that she happened to be the wife of a president whose policies were soundly rejected at the last election. Would it have been too much to ask that she maintain a dignified silence once her husband left office?

While in the White House, Mrs Obama championed the “Let’s Move” campaign, which encourages exercise and healthy eating among young people.

She being uniquely positioned to decide what constitutes healthy eating for millions of people, of course.

At least 20 people have died after a tourist bus fell from a cliff near the southern Turkey seaside resort of Marmaris.

Another 11 were injured when the driver lost control of the minibus and ploughed through a crash barrier.

Local media said no foreign tourists were among the passengers.

About 40 people were on board, according to Amric Cicek, governor of Mugla province, who suggested the brakes may have stopped working.

But the mayor of Marmaris, Ali Acar, told Turkish newspaper Hurriyet: “I think that the accident was a result of driver error.”

This is a reminder that, for all of Turkey’s recent economic growth and the emergence of a decent airline, its roads remain dangerous places. The government really ought to do something about this, if it can find time.

Prime Minister of Canada and internet darling Justin Trudeau has shown the rest of the world’s leaders how to do publicity once again – by bringing his three-year-old to the office.

Of course, it’s not the first time the 45-year-old internet-savvy politician has caught global attention.

The liberal politician has been applauded by his supporters for supporting Syrian refugees, marching at a gay pride parade, and openly declaring himself a feminist.

Naturally, the BBC fails to realise that these antics are precisely why much of the world think him a laughing stock.

“So precious … I’m old enough to remember seeing photos released of you and your dad [former Prime Minister Pierre Trudeau] when you were little,” one Facebook commenter volunteered.

Would that be the one where he’s being held by family hero Fidel Castro? 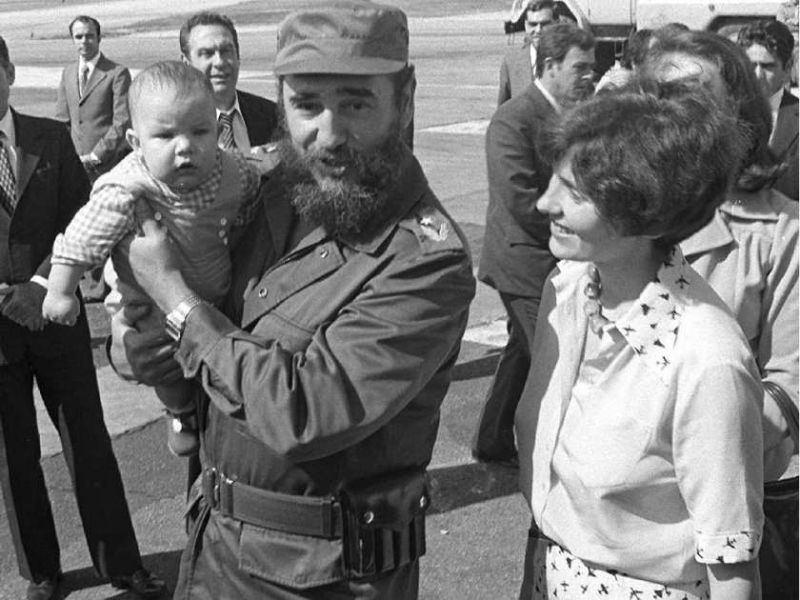 If only we were able to get the view on Trudeau from Cuban Facebook commenters.

A Mexican businesswoman who headed a group of 600 families searching for their disappeared relatives has been killed.

Miriam Rodríguez Martínez was shot in her home in the town of San Fernando in Tamaulipas state.

She was known for successfully investigating the kidnap and murder of her daughter by a local drug cartel, the Zetas.

The information she gave the police ensured the gang members were jailed.

The group she established was part of a wider trend which mushroomed after the October 2014 disappearance of 43 students from Ayotzinapa in the southwestern state of Guerrero.

Frustrated by a lack of government help, groups of families began their own searches for people who had disappeared in their areas, taking courses in forensic anthropology, archaeology, law, buying caving equipment and becoming experts in identifying graves and bones.

There are now at least 13 of these groups across the country.

One of the points overlooked by those who oppose Trump’s immigration policies is that the current practice of allowing Mexicans to move to the USA and remit monies back home is that it drastically reduces the pressure on the ruling elites to sort the place out. The USA acts as the safety valve for Mexican governmental fecklessness, and short of an incentive to do anything other than keep themselves wealthy and protected, the country is rapidly becoming a failed state. The fact that relatives of murdered citizens have had to form their own forensic teams because the police can’t or won’t do the job shows just how bad things have got. When the Mexican government started squawking about the wall, Trump should have slapped their president around the face with a strong right hand (or perhaps got Mattis to do it) and put these feckless parasites firmly in their place. Although there is the argument that American drug laws is what has created this situation, but if that’s the case then let’s hear the Mexicans make it.