This story is worth reporting, but not in the way the Washington Post has chosen:

The three D.C. students couldn’t believe the news. They’d developed a method to purify lead-contaminated water in school drinking fountains, and NASA announced last month that they were finalists in the agency’s prestigious high school competition — the only all-black, female team to make it that far.

The NASA competition called on students to find creative ways to use space technology in their everyday lives. The teens said they considered dozens of ideas but settled on a water purification system because they noticed some water fountains in their school could not be used because of potential lead contamination.

They worked at the Inclusive Innovation Incubator — a technology lab focused on diversity and entrepreneurship near Howard University — where they volunteer, and their mentor at the incubator encouraged them to compete and supervised them on weekends as they built a prototype.

The teens purchased two jars, placing meters in each to test the purity of the water. In one jar, the teens place shards of copper in the water — with the copper acting as the experimental contaminant. An electric fan spins the water while filtering floss — a type of fiber — collects contaminated particles. Once clean, the water is transferred by a straw into the second jar. The meters verify that the water is clean, and the teens said they trust their system so much, they drank the water.

This is a fantastic achievement for which the three girls ought to be extremely proud. Here’s their picture. 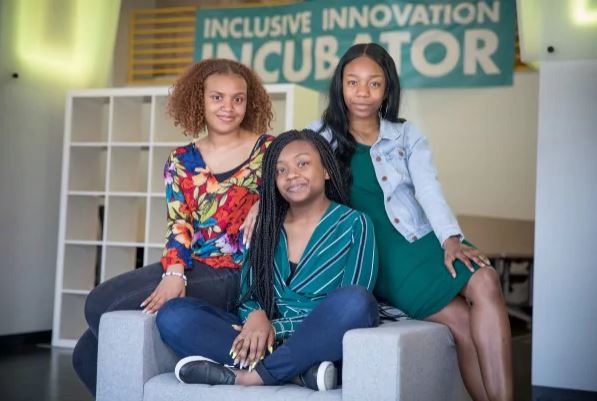 So what’s the rest of the story? This:

The next stage of the science competition included public voting, and the Banneker High School students — Mikayla Sharrieff, India Skinner and Bria Snell, all 17-year-old high school juniors — turned to social media to promote their project.

But while the teens were gaining traction on social media and racking up votes, users on 4chan — an anonymous Internet forum where users are known to push hoaxes and spew racist and homophobic comments — were trying to ensure the students wouldn’t win.

The anonymous posters used racial epithets, argued that the students’ project did not deserve to be a finalist and said that the black community was voting for the teens only because of their race. They urged people to vote against the Banneker trio, and one user offered to put the topic on an Internet thread about President Trump to garner more attention. They recommended computer programs that would hack the voting system to give a team of teenage boys a boost.

Which is pretty appalling however you cut it, but I suspect it is a symptom rather than a cause. In the era of affirmative action and identity politics, a lot of people would assume these three girls had advanced in the competition because they were black and female, rather than because their invention was any good. If you are going to promote people on the basis of their membership of a minority group rather than their competence, pretty soon people will question whether any member of a minority group is competent and deserving of their position.

As I’ve argued on this blog before, what is so insulting about efforts to help women in STEM fields is that it ignores the millions of women who have done very well in STEM without affirmative action or other patronising policies which lower the bar. The real losers from affirmative action policies aimed at helping minorities is not people who fall outside the designated groups but genuinely competent minorities who not only have to sit alongside less-capable colleagues of the same sex or skin colour, but now have their own competencies called into question. Some time ago a very capable female engineer was invited to attend a management training course reserved only for the best and brightest in the organisation. She confessed she felt uncomfortable because she found it full of women, and she hoped her being female wasn’t the only reason she’d been asked to attend. She wanted to be there wholly on merit or not at all, and I could understand why.

The online abuse targeting the three girls in the story above is unsurprising given how gender and race have been elevated above human achievement in the era of identity politics. At some point, those who fall outside the designated victim groups will start to push back and much of it will be unpleasant. Not so long ago few would have doubted these girls deserve to reach the finals of the NASA competition, and they would have been held up as an example to aspiring black and female students. Instead their achievements are being doubted and the competition, along with everything else, turned into a political circus. It’s a shame the Washington Post chose to make the story about idiotic racists on obscure web forums rather than the appalling effects on society of the poisonous identity politics they’ve done so much to promote.

35 thoughts on “Another casualty of identity politics”