Well, I’m still enjoying this world cup, even if the knockout stage kickoff times in Thailand are 9pm and 1am respectively. France v Argentina was one hell of a match, and if Kylian Mbappé keeps playing like that France are in with a good shot of winning the whole thing; Argentina never looked like serious contenders, only scraping through the group stages. Portugal were a disappointment, deservedly beaten by a faster and more hungry Uruguay. The pass which Edison Cavani sent across field to Luis Suárez was sublime, as was his header into the back of the net a few seconds later. Unfortunately it looks as though Cavani will miss the quarter final with France through injury, otherwise it would be a very close game to call. They may still do it.

I was very pleased with Russia knocking out Spain. Not only because of my connections with Russia, but because Spain really were the overwhelming favourites and there was something poetic about Russia pulling off such a victory in Moscow. Also, it generated some amusing memes, my favourite being this one: 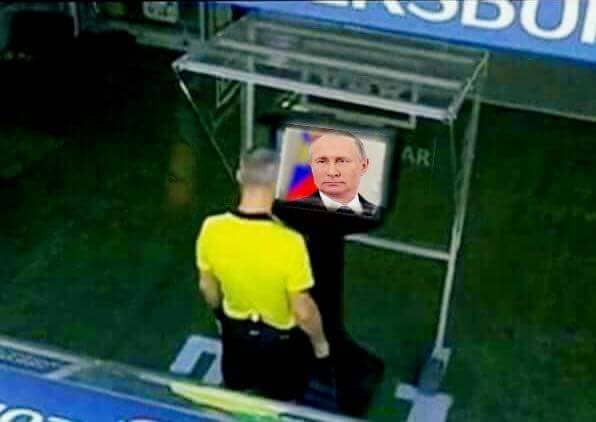 So England play tonight with a chance to book a quarter final spot with Argentina, Portugal, Spain, and Germany out of competition and very nearly Croatia and Belgium too. I felt sorry for the Japanese last night, but that winning goal from Belgium was superb.

By far the most amusing sight for me this world cup was seeing Korea’s Song Heung-min tap the ball into an empty German net while Manuel Neuer was up in the opposition half. Oh boy did I laugh. But I believe Germany’s premature and ungraceful exit is related to something I’ve written about before on here:

It has long been my opinion that the Bundesliga is run for the benefit of Bayern Munich and the national football team, whereby anyone who shows a smidgen of talent in the other clubs is snapped up by Bayern Munich who immediately trebles the player’s wages.  Other clubs have almost no chance of competing unless they could stumble upon a few youngsters and assemble a side that could be held together long enough to win before the bigger clubs came and swiped their best players, as Klopp managed to do.  As a method of winning the World Cup it proved successful as Bayern Munich players formed the core of the German team that won in Brazil in 2014, but I am doubtful that it benefit the long term health of German football.

Germany draws heavily from Bayern Munich when selecting its national team, the Bavarian club providing 6 of the starting 11 in their opening game against Mexico. The trouble is, Bayern Munich won the Bundesliga this season by 21 points. In the Champions League they got relatively easy draws before coming up against Real Madrid in the semi finals who made short work of them. In other words, Bayern Munich – whose players form the core of the German national team – had seen very little by way of proper opposition all season, and perhaps even longer. When some of these players turned up at the world cup they may well have only played a handful of genuinely tough matches against world class players in the last two seasons. This makes the decision to cut Man City’s Leroy Sane from the squad all the more baffling. Little wonder they struggled against the likes of Mexico, Sweden, and Korea, and crashed out in the group stages.