Once again Natalia Antonova provides a thread on her marriage which is worth looking at more closely. Key points:

Using highly manipulative language, this person explained why she was extremely disappointed with my decision to leave my marriage. She went on to tell me that having left, I should not be allowed to have a personal life of any kind — as it would be bad for my child.

There are two ways to look at this. Either this person was, as Antonova claims, a religious nut who is somehow benefiting personally from this intervention; or she is disappointed that she left her husband and is concerned for the future of her child. Before I go any further, here’s how the kid is getting on with his now-single mother: 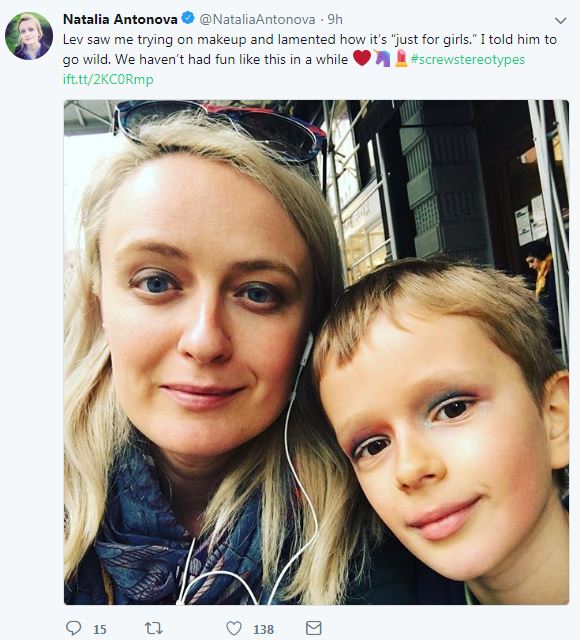 No cause for concern there obviously, especially anything which could be linked to a lack of father in his life.

Now it’s never nice to have someone poke their beak into your personal affairs, especially over emotional issues such as relationship breakdowns, but on the other hand it can be extremely useful to have someone tell you what you might not want to hear. I am fortunate enough to have always had close friends who have no qualms about telling me what I don’t want to hear, although happily they rarely have to these days. However, one thing I’ve noticed about many women is they don’t take blunt honesty well, and in my experience they choose their friends based on their co-opting the narrative of the woman in question; anyone who queries it is cast into the wilderness forever. This is especially the case following the breakdown of a friendship or romantic relationship.

What’s interesting is that this someone had witnessed my ex’s substance abuse and erratic behavior firsthand. At the time, she even expressed concern about it. But nevertheless: Women like me are not allowed to leave, she believes. She very skillfully shamed me for doing so.

So someone who witnessed the breakdown of Antonova’s relationship expresses disappointment in her actions and suggests she may be doing the wrong thing. At this  point I’m left with a choice between this person being a psychopath who wants to see Antonova abused some more, or Antonova’s situation being less extreme than she’s making out. Which is more likely, do you think? And is “very skillfully shamed me” simply another way of saying “she told some uncomfortable home truths”? At the very least, unless this woman is a complete nutter (who Antonova was happy to have in her life before the breakup), one would think this would give her pause for thought. But no: the modern feminist way is to adhere to the narrative at all costs, amplifying it in public while purging all dissenters from their lives.

She kept insisting that, “Oh, of course, we all can have different opinions on this issue!” While sending me links to stories of kids who had attempted suicide because their mothers were hussies who left unstable marriages and committed the grave sin of dating other people.

Now when a couple split up there is always fault on both sides. It might be heavily stacked on one or the other, but there is always some on each side. Always. I know a fair few single mothers, and when I speak to them about their separations they are generally quite even-handed about it. Much of the time they say there were compatibility issues, and while they always say their ex-husbands had faults they never deny the situation was “complicated”, and took some time to develop. Even those who have reason to be angry and bitter remain reasonably objective, preferring to concentrate on their futures and those of their children than dwell on the past. On the other hand, I’ve met divorced women who even years later described their ex-husband as a monster who made her life a living hell, and you wonder how on earth they entered into a relationship with such a person if even half of what they’re saying is true. For example:

The Bible was brought into this, of course. She heavily implied that what I did was a sin. She also implied that my child is likely to attempt suicide when he’s older — because of my selfish decision to leave his father, a highly unstable, violent, frequently terrifying man.

On one occasion I happened to get an ex-husband’s side of the story and unsurprisingly it was rather different. Now I couldn’t be sure who was telling the truth, but if you have one person saying they’re completely innocent and the other saying there was fault on both sides, who do you believe? However, any suggestion that perhaps there was fault on both sides, or there are several perspectives on the situation, was met with howls of outrage that I was blaming them or saying they deserved what happened. Again, any dissent cannot be tolerated by women whose entire life depends on the narrative being upheld.

This experience made me wonder about the women who are thus shamed — by “friends,” by religious communities, by their abusers’ other enablers — and then go back. Not everyone is in a place to withstand this kind of manipulation. This is why loyalty, taking sides, is so important.

Yes, there’s no room for self-reflection or listening to third-party views on what went down: the important thing is to surround yourself with people who tell you what you want to hear. If the goal is to ensure you’ll never enjoy a lasting relationship in future, this is a good approach.

The only thing which will survive such “solidarity” is whatever delusions these women are labouring under. As advice goes, it’s pretty self-serving.

13 thoughts on “An Autopsy of a Relationship”