I’ve noticed that the UN’s Sustainable Development Goals seem to get mentioned a lot in my presence recently, particularly when I’m in Geneva. It’s not so much that my university has a policy of pushing this stuff as Geneva being home to various UN bodies, hence is stuffed to the gills with do-gooders, NGOs, and busybodies who latch onto them. In short, it’s more by virtue of proximity than anything else.

Naturally, I’m unimpressed by it all. I sat in a seminar recently where various well-educated, pasty-white western folk living the high life in Geneva at taxpayer expense spoke about Africa as if it were populated by retarded children who haven’t yet worked out that gender equality will catapult their societies into a whole new era of peace and prosperity. If they’d been wearing pith helmets and talking about Christianity rather than gender equality I’d have thought I’d gone back in time to the peak of colonialism. I’ve decided I’m going to do a podcast on each of the UN’s sustainable development goals. highlighting the downsides and trade-offs of which their proponents seem unaware.

Anyway, yesterday a long-time reader and ex-boss sent me the link to this paper:

This research explores how female-led micro, small and medium enterprises (MSMEs) in semi-arid lands experience and respond to climate risk. MSMEs account for about 80% of employment in developing countries, are highly vulnerable to climate change and are limited in their capacity to adapt.

Female entrepreneurs can be key in promoting resilience at micro (e.g. household) and macro scales but how they experience or adapt to climate risks has been little researched. This paper addresses that gap with a case study of how female-owned MSMEs experience climate risk in the semi-arid county of Narok in Kenya’s Rift Valley. Findings suggest female-led MSMEs in Narok may face both additional exposure to climate risk compared with men, and additional barriers to adapting to that risk.

So in parallel to pushing more women to become entrepreneurs in Africa the neo-colonial missionaries have discovered these same women are now at greater risk from climate change. The reasoning is a veritable work of art:

The research found that strong social and cultural norms around gender roles, and resource use and access, confine female-led MSMEs to sectors that experience higher exposure to climate risk – most notably agriculture.

Society and cultural norms must be overturned to protect UN-encouraged female-led small businesses from climate change.

This seems to have very little to do with climate change.

The research identified examples of female entrepreneurs pursuing unsustainable forms of coping that may help in the short term but which reduce their capacity to adapt to climate change in the longer term.

Clearly these are gender-related problems.

and land sales, which are usually carried out by men, with female-led MSMEs usually not receiving any direct benefit.

So climate change might lead to a female-led business having to sell land which, for some reason, is usually carried out by presumably random men and the woman will usually not receive any money. I don’t know about you, but I’m convinced.

Adaptation tools appear to include social networks such as women’s groups and table banking initiatives, through which groups of women save, rotate funds and lend money. However, these funds appear unlikely to be adequate to protect MSMEs from the impacts of climate extremes.

If female-led businesses insist on excluding men from their financing operations they’re going to struggle, regardless of what the climate is doing.

Female entrepreneurs in this research suggested a strong dependency between household resilience and business resilience. Therefore building women’s resilience at the household level is likely to serve as a key route to enabling private sector adaptation among female-led MSMEs.

Okay, but when western countries build up women’s “resilience” we find a lot of them never actually get to run a household. Is this what African women want, increased “resilience” at the price of being single?

The research also finds that while Kenya recognises the need to support female entrepreneurs in various national policies (including in national climate change legislation), these policies are currently poorly implemented.

Why, it’s almost as if the government pays lip service to the latest western fad in order to keep the aid money rolling in but doesn’t actually implement anything. In Africa, of all places! Who knew?

The research consisted of a literature review plus focus group discussions and interviews with 17 female entrepreneurs, most of whom work in agriculture, and a workshop with other stakeholders including government and NGOs.

This is the basis on which they want to overturn African societal norms? Interviews with 17 female entrepreneurs? Meanwhile, a thread on Twitter provides the view of an actual African woman on such matters. I recommend reading the whole thing, but here are the most poignant parts: 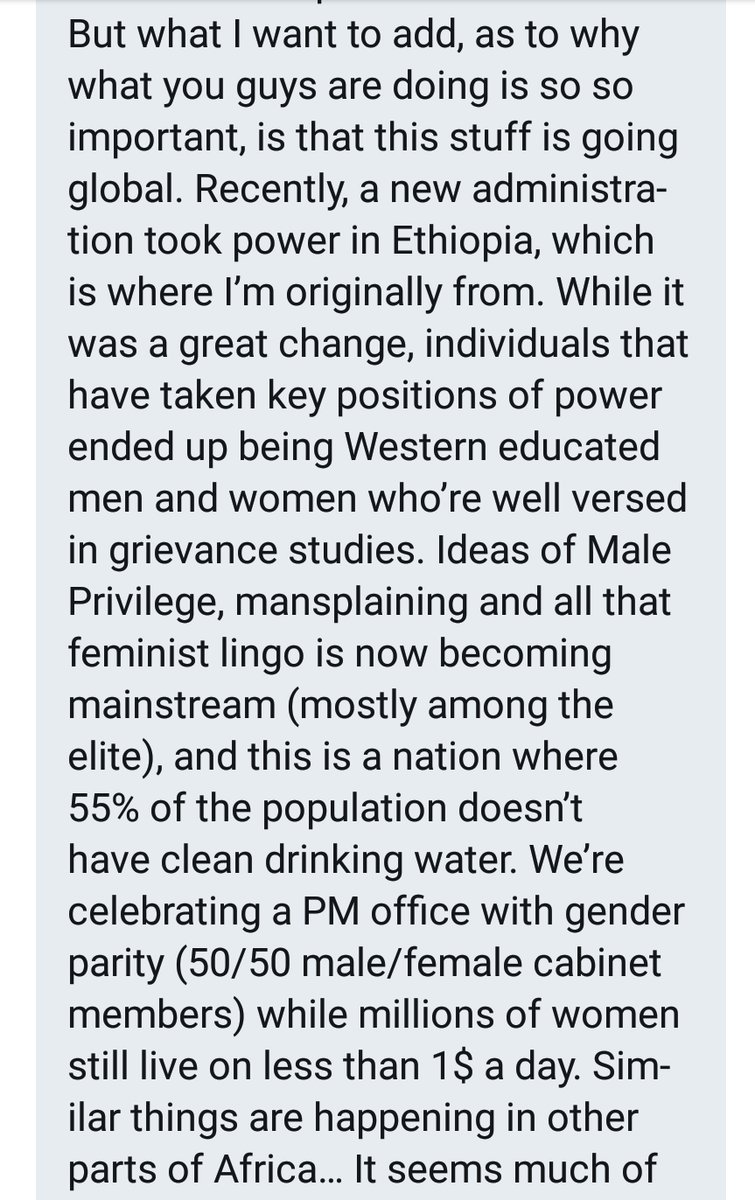 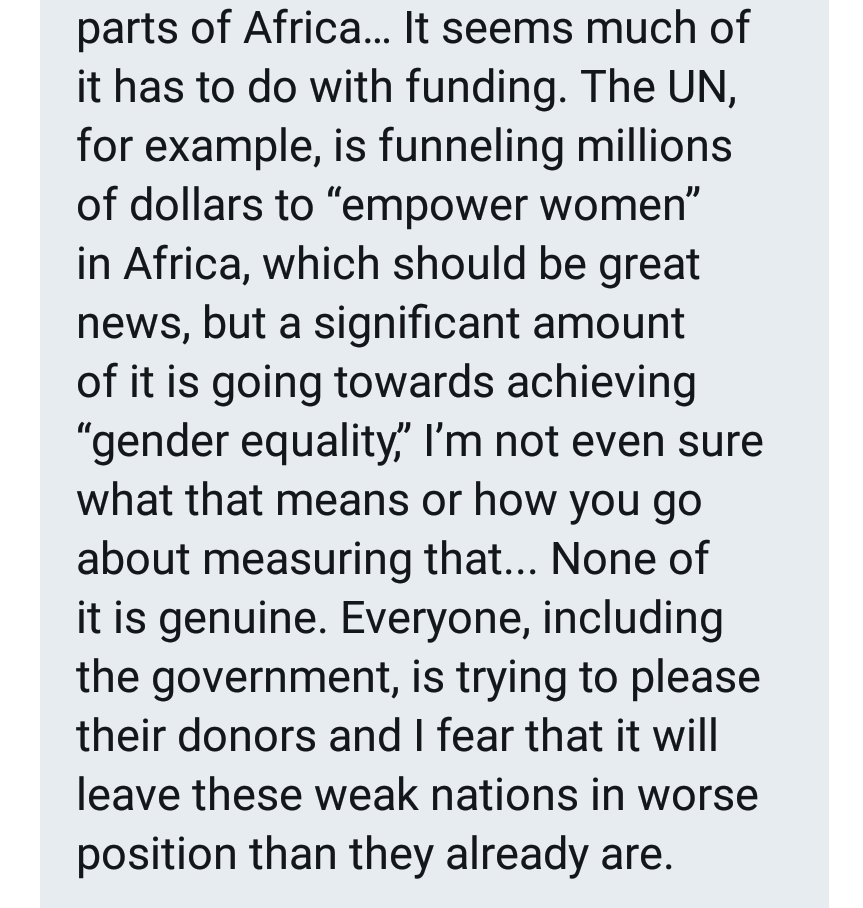 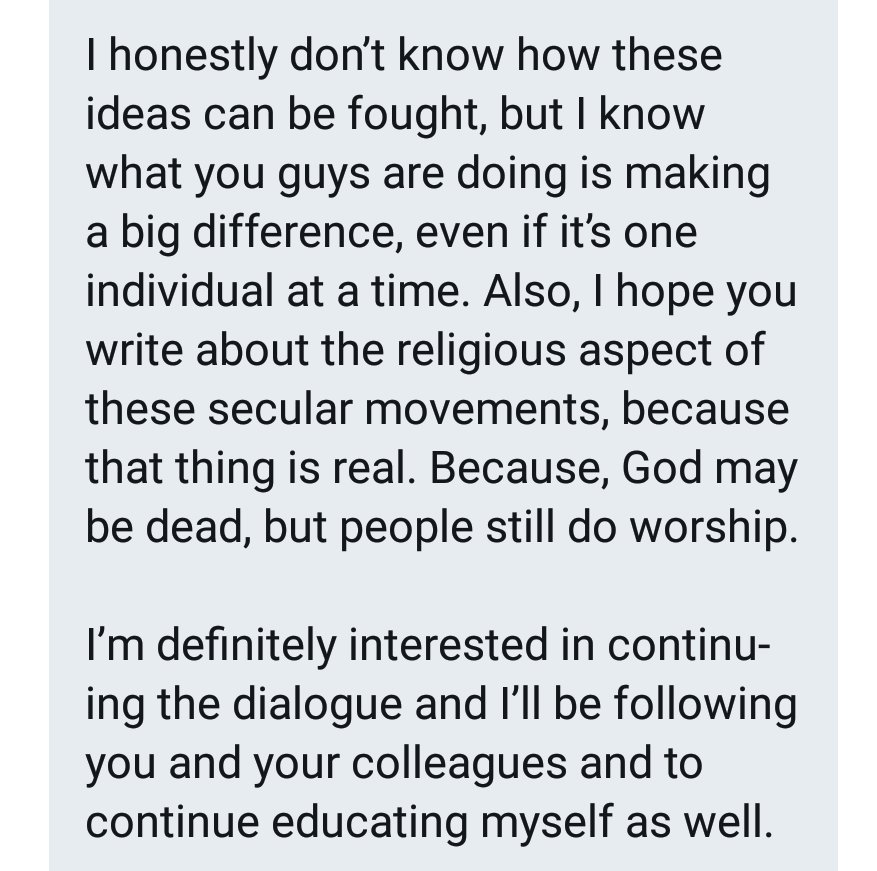 “The religious aspects of these secular movements”. I’ve written about this before.

13 thoughts on “UN-driven neo-colonialism in Africa”