Via Fay once more, a bizarre article about a lefty “prepper” who is ensuring she’s ready for catastrophes such as zombie attacks, giant earthquakes, and the election of a Republican president. Here’s an accompanying pic: 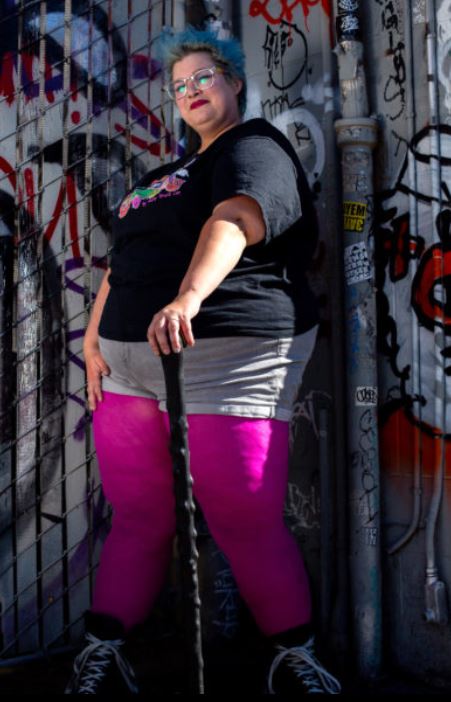 Both advantages and disadvantages of seeing out a nuclear winter holed up in a bunker with someone like this occur to me, mainly distinguishable by whether she’s alive or dead after Day 1. But she’ll not come alone:

While I was beginning to explore the art of prepping, I met my partner, a fellow anarchist who specializes in constructing urban shelters and creating makeshift weapons out of random finds from the local dumpster.

If you need a club fashioned from a stale baguette, he’s your man.

Ape teaches me how to handle and care for knives and guns, while I teach him how to recognize medicinal herbs in an urban setting, how to preserve food, and how to stitch up a wound.

Once he’s washed his hands, I hope.

I have no idea why this is relevant to the story, but research shows that people with blue hair and a history of orgy-attendance insist on telling others about it.

What was normally a group of boisterous party animals started off with us tentatively nibbling at cheese and crackers, whispering to each other in corners, and halfheartedly making out, one eye always on the votes coming in.

When it became clear that Trump was going to be our next president, silence descended over the mostly naked crowd. Everyone seemed frozen in place. I felt a sinking in my gut and I knew what we needed to do; my boyfriend and I looked at each other and began to dress without a word.

Making your getting laid dependent on Hillary winning was probably not the smartest move in hindsight. And unsurprisingly:

She’s in with the Burning Man crowd, eh? Who would have guessed?

[The author], Kitty Stryker, is an anarchist, a Juggalo, and a street medic working in the East Bay. Her first book, “Ask: Building Consent Culture” was published through Thorntree Press in 2017.

Amusingly, the foreword to her book is written by none other than Laurie Penny; the two met in a fetish club in 2010. Come the Apocalypse, I think I’ll take my chances with the zombies.

29 thoughts on “Survive, rebuild, and…erm…forget it”