Over the weekend a lunatic walked into a synagogue in Pittsburgh, PA and shot dead 11 Jews who were at worship. It quickly transpired that the murderer was a far-right headcase who thought the Jews were responsible for all America’s ills, including mass immigration. His social media accounts show he detested Trump, believing him to be in thrall to the Jews and not doing enough to halt their nefarious plans. The answer, he believed, was to murder a bunch of elderly Jews.

Despite the motivations of the perpetrator, and the fact that Ivanka Trump is Jewish having converted to get married, liberals and fake conservatives across America are blaming the attack on Trump. The reaction of non-American Jews wasn’t much better. Here’s a British chap who writes for the Jewish Chronicle:

There are no words to describe just how much I hate Donald Trump. https://t.co/KZmNmyyuXw

Sugarman’s timeline is filled with how he mourns for his co-religionists in the US, yet the sanctity of the still-warm bodies is not so great that he can’t stand atop them to virtue-signal about Trump. My first question is why a journalist would think it appropriate to start talking about gun laws before the smell of cordite has gone from the air. Secondly, what is wrong with Trump’s response that if the worshipers had been protected with arms, things would have gone differently? Europeans love to scoff at the unsophisticated, redneck Americans who think armed protection is the answer to such massacres, but I used to walk by a Jewish centre one street over from my apartment in Paris on a daily basis. And have a guess what? It was guarded throughout the day by two soldiers wearing combat gear and each carrying a FAMAS. The protection was brought in after the kosher supermarket shootings in Paris which took place two days after the Charlie Hebdo massacre. I understand that many synagogues and Jewish cultural centres across Europe now have armed guards stationed outside, yet none of these leave British Jewish journalists unable to find words to express their hatred of the head of government. We needn’t think too hard as to why that is.

Laurie Penny, who is apparently now in the US involved with writing a TV show, has quickly learned which drum to bash in her new career:

This was posted hours after the worst massacre of Jews on American soil. https://t.co/rfzUPRj9m5

If Trump’s speaking at a political rally shows he is rather callous towards Jews, I wonder what we should make of Laurie’s hit-piece on Ivanka which begins:

IVANKA TRUMP HAS WRITTEN a book about female empowerment, and it is about as feminist as a swastika-shaped bikini wax.

Because nothing represents solidarity with Jews like mentioning swastikas when attacking one in print.

There is also a lot of sentiment like this: 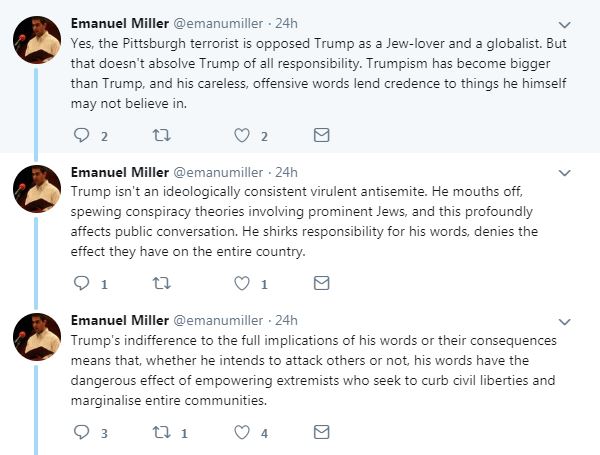 It’s hard to tell whether he genuinely thinks this, or whether it’s just an excuse to show his dislike for Trump. Emanuel Miller is a generally decent sort, but anti-Trump derangement infects many otherwise sensible people. Now Miller lives in Israel, and he will be fully aware of the opprobrium that was heaped on Trump when he moved the US embassy from Tel Aviv to Jerusalem. Hell, the UN even held a special session to denounce it. He will also be fully aware that Trump, by scrapping the nuclear “deal” and re-imposing sanctions, severely clipped the wings of Israel’s greatest threat, Iran. He’s also halted funding to the Palestinians for using the money to buy weapons which they then use to attack Israel.

So we have Trump attracting the world’s wrath for brazenly pro-Israeli policies, while Jews wring their hands that he’s “careless” with words. Well here’s the thing. If Trump wasn’t indifferent to the supposed consequences of his words, and worried about what people would think of him, the embassy would still be in Tel Aviv, the Iranians would still have their deal, and workers in Palestinian rocket-factories would still have their dental plans. They’re both sides of the same coin: you could have that nice man Obama back – who of course was never careless with words or empowered extremists, oh no – but how good was he for the world’s Jewry? The Mullahs seemed rather fond of him, at any rate.

Sadly, a lot of commentary following the synagogue shooting consists of people lining up to virtue-signal over Trump, even if it means denying that he’s one of the most pro-Jewish presidents in living memory. Some have gone further, seizing the opportunity to equate any criticism of George Soros as anti-semitic and shut down all discussion over immigration. These are the much the same people who give fawning coverage to Linda Sarsour, ignore Louis Farrakhan, and wave Palestinian flags at BDS rallies.

In summary, it’s probably best to ignore most of what’s being said about the massacre at the Tree of Life synagogue, even by people who are normally sensible; it’s too much effort to separate genuine opinions from anti-Trump derangement and in-group virtue-signaling. Finally, there’s this:

My thoughts are with those killed or injured in this horrific act of antisemitic violence, and with their loved ones. We must stand together against hate and terror.https://t.co/3fpyISfJM0

If only the Jews had a word for chutzpah.