A reader sends me a link to this article which begins thusly:

Today is my birthday – I’m 36. I’m celebrating, since you ask, with an outing to Richmond Deer Park, followed by champagne and pizza in the garden. I know: so civilised and mature.

This is to let you know she’s a middle class wannabe posho. If only single women in their mid-thirties knew how unoriginal stuff like this is, and how shallow it makes them look, they’d quit doing it in a heartbeat.

Anyway, just over a year ago, heading for 35, I was sitting in a pub with my father in central London…

You just knew it wasn’t going to be in a shopping centre in Wolverhampton, didn’t you?

…and I asked him a favour. With his coolly quantitative analytical skills – he studied physics as a young man – could he please help me decide whether I should freeze my eggs before I turned 35?

And he thought he was going for a quiet pint. Of all the topics to discuss with your dad, this is an odd one indeed. And all because he studied physics in his youth.

I didn’t think too hard about whether the ‘right’ man to do it with would appear. In fact, I have always thought the desire to be a mother must trump romantic uncertainty. If need be, I’d find a male friend (or try to find one) to co-parent. If I really wanted a child and nothing else offered itself I could always go the sperm bank route.

After which you could carve out a career writing articles on how hard it is to raise a child alone, and how the government should do more for people like you.

It turns out that in this respect I’m a bit different from my peers. A report last week found that women are freezing their eggs not because of their careers as has been commonly assumed but to give themselves more time to find a good partner with whom to start a family.

Oh yes, their failure to settle down with a suitable partner in a decade and a half is because they’ve not had quite enough time.

The Yale University study, which analysed the egg freezing motivations of 150 Israeli and American women, found that women “weren’t freezing to advance, they were facing the overarching problem of partnership”.

Well, yes and no. Most will have prioritised their careers such that they’re now too old to find a decent partner. So while it’s true they may not want to advance further, the root cause is their careers took priority at a time when there was an abundance of suitable men.

Thanks to the internet, women may have more romantic and sexual options than ever before, but the quality of options is downright depressing.

Whereas 35 year old women who don’t know what they want and turn to their fathers for advice on egg-freezing is just what every guy dreams of. Every woman I speak to or read on the subject of online dating complains about the quality of men as if they’re the catch of the year. They don’t seem to realise the men they’re meeting on the internet are their peers, counterparts in the same dating pool.

Clearly, many women freezing their eggs think it’s possible that the right man can eventually be found with a few extra years’ searching.

It’s amazing what desperate people will believe, isn’t it?

Have you ever scrolled through the male options on the dating apps Tinder, OkCupid, or Bumble? Try it. It’s not pretty: man after man gurning from a cringingly contrived mirror selfie, big black sunglasses on, too much hair gel, leering or vacant expressions and an incoherent word or two by way of ‘profile’ description.

Because the women on Tinder and OkCupid just exemplify marriage material, don’t they? The duck-faced pouting, the cleavage shots, the list of demands in the profile, the sense of entitlement that accompanies every description, the empty references to travel, food, and “having fun”. And leering expressions, you say? Here’s a photo of the author: 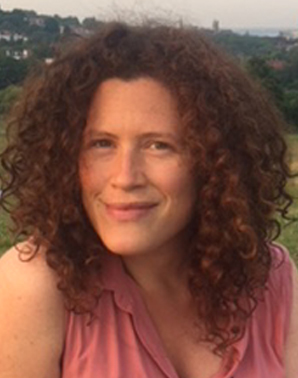 Be still my beating heart.

Often the man is posing, topless, with some kind of animal. (I don’t know why that’s a thing, but it is). There’s very little boyfriend – let alone father – material about.

This woman has been writing about dating and relationships for 20 years, yet here she is, single, asking her dad for advice, and sneering at the men she finds online.

When one does manage to find anyone halfway nice looking and able to hang a sentence together, good luck actually arranging a satisfactory meeting with them.

I imagine they make a beeline for the door the moment they discover you’re a feminist.

My friend Katrina, 37, who happens to have just completed three rounds of egg freezing, is a case in point. Like the women in the study, she froze her eggs not for the purposes of her (extremely successful) career but in the hopes of finding a partner.

In her attempt to do so, she has doggedly trawled a number of dating sites and apps, and tried speed dating events for hipsters and posh people. She’ll often be chatting with several men at once. But when it comes to actually meeting up, they simply vanish into thin air – or, like one mysteriously-occupied “entrepreneur”, keep ignoring the fact that she has a demanding day job, and suggesting impromptu coffees at one in the afternoon instead of the evening drinks she offered.

Firstly, men don’t care she has a demanding day job: after all, that is likely what landed her in this position in the first place. If she is still prioritising her work, chances are she’s not going to make a very good partner. Secondly, a quick coffee at 1pm is much better for a first date than evening drinks. There is no pressure, no expense, you’re in a public place so it’s quite safe, and if you don’t like one another you can leave easily. It sounds as though this Katrina expects to be romanticised over expensive cocktails she won’t be paying for, and is unwilling to compromise. Little wonder she’s single.

It’s all very frustrating and leads me to think that women who want to be mothers should go a non-traditional route, be that sperm bank or something else, rather than waiting around for a Mr Right that may well never appear.

Notice it never seems to occur to these women that they might be the problem? What if Mr Right can’t do evening drinks but only a quick coffee during the day? Oh well too bad, better go freeze my eggs.

Some posit that the mismatch between successful women in their 30s and their male counterparts comes down to women being now the more educated sex. Certainly, my single friends and I all feel that as the quantity of options facing women in their 30s has soared, the quality of the options has dropped off a cliff.

There’s that complaint about quality again, as if Maria Sharapova is writing this column rather than some haggard old feminist. And I’ve written before about how women are so self-absorbed they refuse to date men they believe are intellectually inferior to them. I feel sorry for some single women, but not those who treat men with such utter disdain as the author and her friends seemingly do.

Education may be partly to do with it. But perhaps it’s just that women – trained from an early age to be self-aware, emotionally astute and good at multi-tasking – reach a peak of all-pistons-firing personhood in their 30s and 40s that men simply can’t match.

You really believe that? That you’re so brilliant men simply can’t match you? Or could it be you’re not very nice, you’d make a lousy partner, and men simply aren’t interested?

Whatever the underlying cause, as long as egg freezing brings women relief from stress I’m all for it.

Alas, freezing eggs is so far removed from a solution to your problems it’s a category error, akin to Googling for misplaced car keys. Hell’s bells, feminism has wrought some damage, hasn’t it?