An event in Melbourne, completely without precedent elsewhere, leaves us dumbfounded:

Australian police have arrested two people after a car drove into a crowd in Melbourne.

The car “collided with a number of pedestrians” on Flinders Street, a busy junction in the centre of the city, said Victoria Police.

Fourteen people have been injured, with several in a critical condition.

I know that junction, I used to cross it on my daily walk to work along with about twenty thousand other people. It’s busy, and there’s nothing between the pavement and the road. If you want to mow down a bunch of folk in a car in Melbourne, that’s where you’d do it.

Police have said it was a deliberate act but said it was too early to say whether it was terrorist-related.

This is probably true, but I don’t think time is really the issue here. I remember when an Iranian took a bunch of people hostage in a Sydney cafe and shouted Islamist slogans while waving an ISIS flag before shooting someone; when the police eventually got around to saying whether it was terrorist-related they’d decided it wasn’t. Just another of those “lone wolves” we keep seeing everywhere. The public responded with a hashtag fronting a bizarre campaign to sit next to Muslims on public transport. If only their cricket team behaved like this on the pitch, I’d be a lot happier.

The driver and another man have been detained.

Helpfully, 7 News Sydney tweeted a photo of the two men: 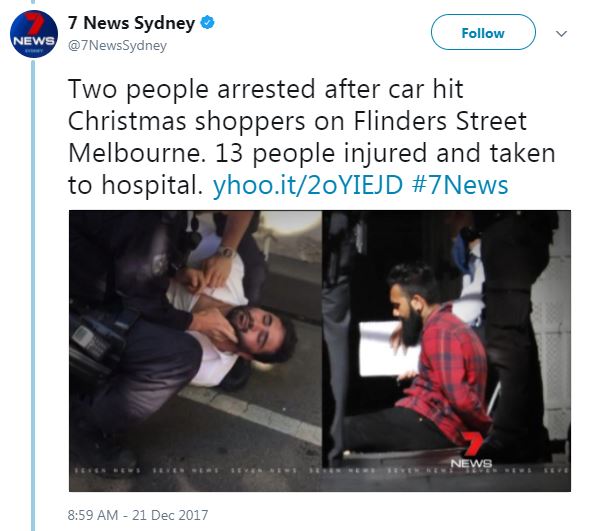 Beards and a lumberjack shirt? Why, they’re fucking hipsters! Melbourne is full of them, and they really are a menace.

Witness Jim Stoupas, who runs a business nearby, told the BBC: “It just barrelled through a completely full intersection of pedestrians. There was no attempt to brake, no attempt to swerve.”

He added: “I saw probably five to eight people on the ground with people swarming around them [to help]. Within a minute, I think, there were police on site, so it was very, very speedy.”

Victoria Ambulance said in a statement that a child of pre-school age with serious head injuries was among those taken to hospital.

If the father of that child were Chechen, the perpetrators would not have long to live. I’m merely observing some cultural differences here, celebrating diversity as we’re encouraged to.

In January, six people died when a man drove a car into pedestrians on Bourke Street.

Tsk! Someone tell the BBC that the official term is “diversity bollards“.

Prime Minister Malcolm Turnbull said on Twitter that the investigations had begun, and sent “thoughts and prayers” to those affected.

Of course. This will be forgotten by Christmas Day.

27 thoughts on “A Mystery in Melbourne”