Life in the seas risks irreparable damage from a rising tide of plastic waste, the UN oceans chief has warned.

I saw Lisa Svensson on TV this morning and she’s a rather attractive blonde-haired Scandinavian. Imagine how surprised I was to find a wealthy, middle-class white woman complaining about environmental degradation in Africa and not, say, an African.

Ms Svensson had just been saddened by a Kenyan turtle hospital which treats animals that have ingested waste plastic.

She saw a juvenile turtle named Kai, brought in by fishermen a month ago because she was floating on the sea surface.

Plastic waste was immediately suspected, because if turtles have eaten too much plastic it bloats their bellies and they can’t control their buoyancy.

Kai was given laxatives for two weeks to clear out her system, and Ms Svensson witnessed an emotional moment as Kai was carried back to the sea to complete her recovery.

I’ve run out of handkerchiefs already. But enough about Kai the turtle and his laxatives: where’s all this plastic coming from?

“It’s a very happy moment,” she said. “But sadly we can’t be sure that Kai won’t be back again if she eats more plastic.

“It’s heart-breaking, but it’s reality. We just have to do much more to make sure the plastics don’t get into the sea in the first place.”

Fuck me, I said enough about Kai! Okay, here we go:

There’s waste from down the coast as far as Tanzania – but also from Madagascar, the Comoros Islands, Thailand, Indonesia and even a bottle from far-away Japan.

Those famously littering Japanese, eh? Has anyone actually done any concrete research into where the bulk of this plastic is actually coming from? Perhaps unsurprisingly, most of the reports on plastic in the ocean steer well clear of actually identifying the source, but this one tells us (page 7):

Less than 20 percent of leakage originates from ocean-based sources like fisheries and fishing vessels. This means over 80 percent of ocean plastic comes from land-based sources; once plastic is discarded, it is not well managed, and thus leaks into the ocean. Over half of land-based plastic-waste leakage originates in just five countries: China, Indonesia, the Philippines, Thailand, and Vietnam, referred to in this report as the five focus countries for action.

I’d also hazard a guess that most of the plastic littering the beaches in Africa and giving poor Kai indigestion was discarded locally, either from the land or ships anchored offshore. Here’s a photo I took on a beach in Lagos: 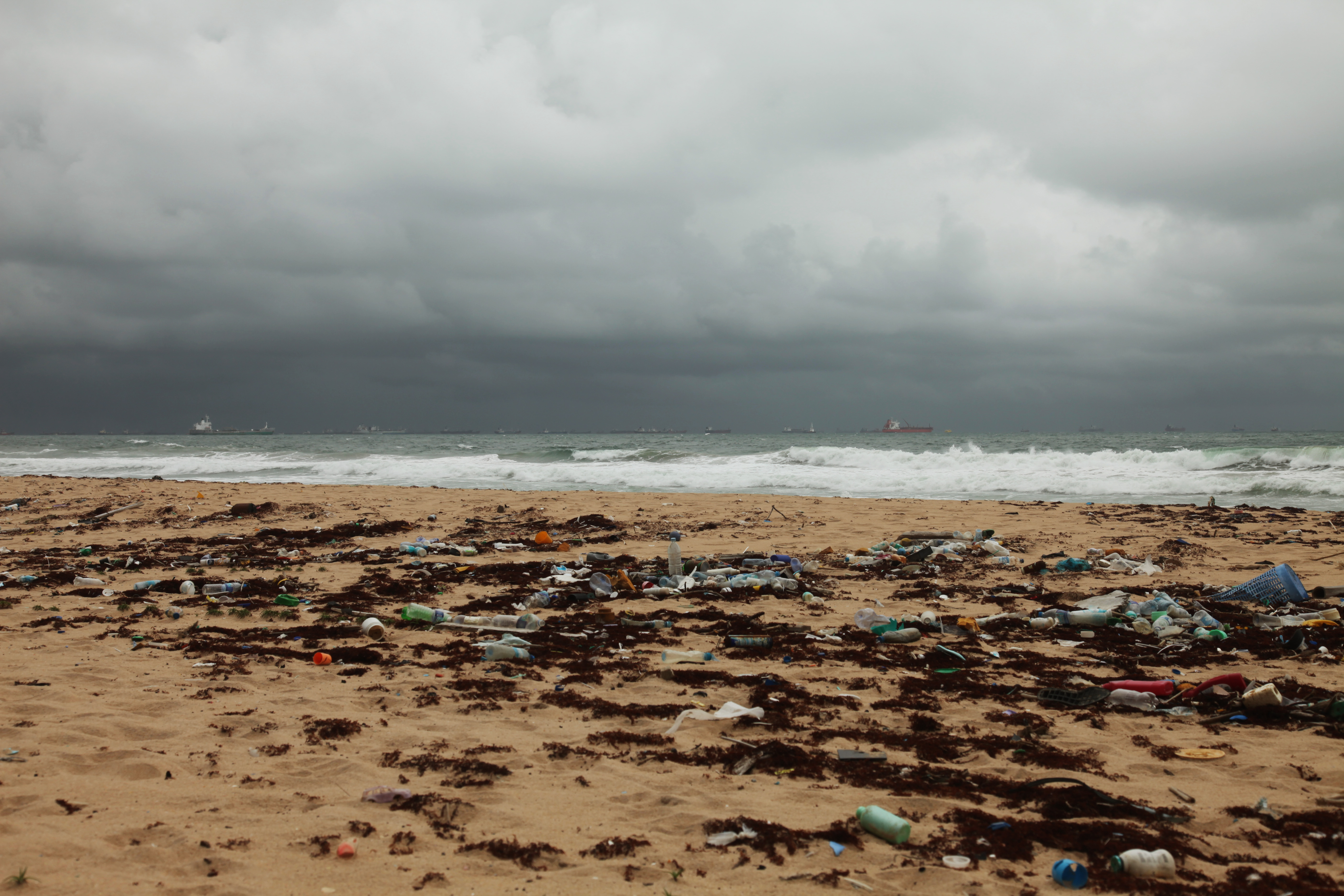 How much of that lot do you think bobbed over from Japan or started life as a carrier bag in a supermarket in Paris? But of course, it is the behaviour of westerners that is the problem:

Tisha Brown from Greenpeace told BBC News: “We welcome that they are looking at a stronger statement, but with billions of tonnes of plastic waste entering the oceans we need much more urgent action.

“We need manufacturers to take responsibility for their products – and we need to look at our consumption patterns that are driving all this.”

“Our” consumption patterns are causing Asians to chuck plastic into rivers. uh-huh.

Finally the article gets around to the underlying problem:

Indonesia – the world’s second biggest plastics polluter after China – has pledged to reduce plastic waste into the ocean 75% by 2025, but some observers doubt legal rules are strong enough to make this happen.

What do they propose as an alternative? Military intervention?

Plastic waste is also on the agenda for this month’s China Council – an influential high level dialogue in which world experts advise China’s leaders on environmental issues.

The Chinese being famously receptive to foreign “experts” telling them what to do.

Kenya itself has banned single-use plastic bags, along with Rwanda, Tanzania and – soon- Sri Lanka. Bangladesh has had controls for many years, especially to stop bags clogging up drains and causing floods.

Ah yes, I wrote about the Kenyan ban on plastic bags here.

But bags are just one part of the problem – there are so many other types of plastic flowing through waterways.

“The UN process is slow,” Ms Svensson admitted. “It could take 10 years to get a UN treaty agreed on plastic litter and a further two years to get it implemented.

“We have to progress through the UN because this is a truly global problem – but we can’t wait that long.

We have five Asian countries chucking plastic into the sea, but we have to go through the laborious, ten-year process of getting a UN treaty because it’s a global problem?

“We need to get much stronger actions from civil society, putting pressure on business to change – they can switch their supply chains very fast. And we need more individual governments to take urgent action too.”

What this means, of course, is making goods and services more expensive and more difficult to obtain for reasonably conscientious and responsible westerners while ignoring those who are actually chucking the plastic in the sea. Oh, and providing cushy 10-year assignments attending UN briefings for a handful of wealthy, middle-class people like Lisa Svensson.

“This is a planetary emergency,” she said. “I sense there is a momentum now about the need to act. We just have to be much faster.”

As we left Watamu after Kai’s joyous release, I turned back for one last glance at the Indian Ocean. A small boy tossed a plastic bottle over his shoulder into the sparkling water.

I have a feeling this article was written in the wrong language, and published in the wrong place. I get that plastic in the ocean is a serious problem, but why are they always nagging us about it?

19 thoughts on “Plastic in the Ocean”