I’ve written before about my theory that many feminists take a dim view of men because those they choose to associate with are low-grade scumbags. Only recently we had a woman saying that all men were sex-pests and a few minutes later labelling men who weren’t sex-pests as “boring”, and I have written several posts on how Laurie Penny’s views of men tell us more about who she befriends than it does about men in general. Just in case one or two of you were thinking this theory doesn’t hold water, let me share this tweet from Laurie herself: 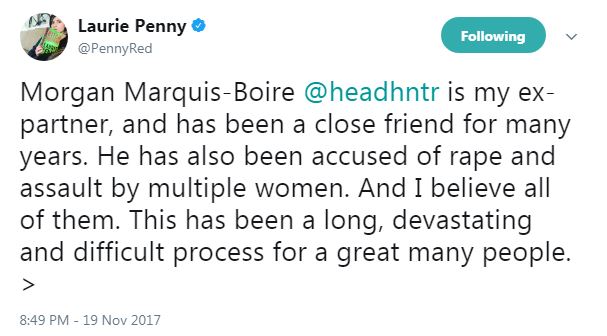 Now there’s a surprise, eh? But let’s just bask in the irony of someone who befriends and partners-up with a serial rapist presuming to lecture the world on the dangers of men and The Patriarchy.

So did our gal know what was going on? Did she cover for him? Alas, we don’t know and she isn’t saying:

Frankly, I’mm not surprised in the least that at least one of Laurie’s friends have turned out to be a rapist. She already told us this:

So, I’ve got this friend with a shady past. He’s a clever and conscientious person who grew up in the patriarchy, and he knows that he’s done things which may not have been criminal but have hurt people, and by people he means women. My friend has hurt women, and he doesn’t know what to do about that now, and from time to time we talk about it. That’s how it happened that, a few weeks ago, halfway through an effervescent confession in a coffee shop, the following words came out of his mouth: “Technically, I don’t think I’ve raped anyone.”

And as I said about another former friend of hers:

Why do I get the impression that this individual is not half as normal and decent as Penny is letting us believe. At a guess, I would say he is a slimy fucker of the first water who hangs around lefty circles hoping to get into the knickers of women, usually much younger and with low self-esteem and few morals, throwing out leftist and feminist platitudes to get himself accepted with no further scrutiny. Penny, at nineteen years of age, ought to have stayed well away from him even if she didn’t think he was a rapist.

For a self-declared feminist warrior who pops up in the national media to denounce misogyny and demonise men in general, she seems to befriend an awful lot of rapists and serial abusers. But as I say in the paragraph above, these types will gravitate towards people like her. Consider this tweet I read today: 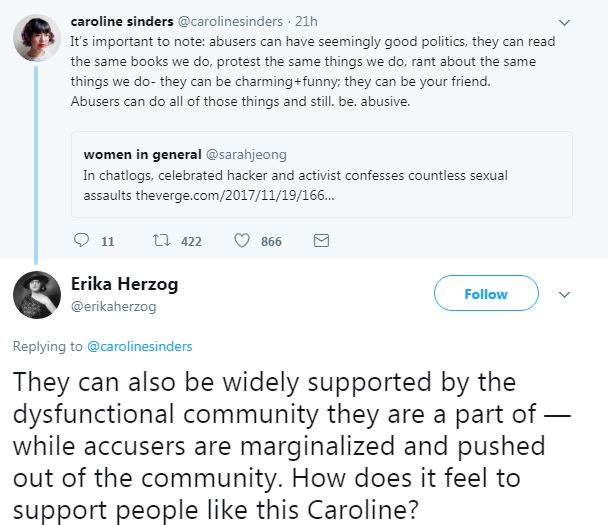 Erika makes a good point. Abusive people deliberately target dysfunctional communities – such as hardcore leftists and polyamorists – knowing they won’t be turfed out on their ear. Instead, by spouting the right political platitudes, they’ll be liked and respected and can count on the support of the rest of the group if anyone lodges a complaint against them.

All of this is obvious, none of it should be a surprise. It seems a lot of these people complaining about sexually-abusive men are enabling and protecting them. For now I’ll charitably assume they are doing so unwittingly.

35 thoughts on “The Feminists who Enable Sex-Pests”