As expected, deranged third-wave feminists are using the Harvey Weinstein revelations to amplify their theory that men as a group are a problem and all of us are potential rapists. Once again the Twitter feed of Laurie Penny provides the best examples of a common sentiment: 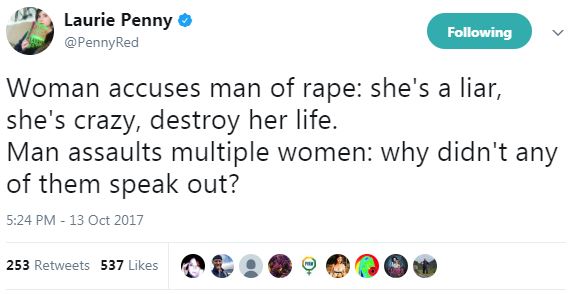 This bollocks needs to be put to bed quickly. Firstly, nobody I’ve read or heard is blaming young, unknown women from speaking out about Harvey Weinstein’s behaviour. As Laurie herself implies, who would believe them? Plus, they have a lot to lose if Weinstein decides to take revenge on them. But what none of these so-called feminists want to ask is why didn’t Hollywood’s most powerful women – some of whom had been abused by Weistein themselves – speak out? Angelina Jolie was a UN Ambassador for heaven’s sake, could she really find nobody to talk to about Weinstein? What about Gwyneth Paltrow, or one of the other dozen extremely rich, well-connected women in Hollywood who knew damned well what Weinstein was like. Why didn’t they speak out?

Secondly, there is something else not being acknowledged by feminists here. It is one thing for young women not to speak out against Weinstein. It is another thing for powerful women to not speak out. But it is altogether a different thing for those powerful women (and men) to constantly praise Weinstein, join him on stage at awards ceremonies, pose for photos with him at parties, and invite him to their homes (I understand he went to the White House 13 times under Obama). This is not merely remaining silent, it is actively providing cover for the man and bestowing on him a social acceptability that his behaviour doesn’t warrant. That is the real issue here, and feminists are doing everything they can to ignore it.

This is not a man problem, nor is it a woman problem: it is a problem whereby shitbag men are aided and abetted by other shitbag men and equally shitbag women. In short, it’s a shitbag problem. However, on Friday we had Emma Thompson telling the BBC we have a problem with “extreme masculinity”. Sorry, what? When I think of “extreme masculinity” someone like this comes to mind: 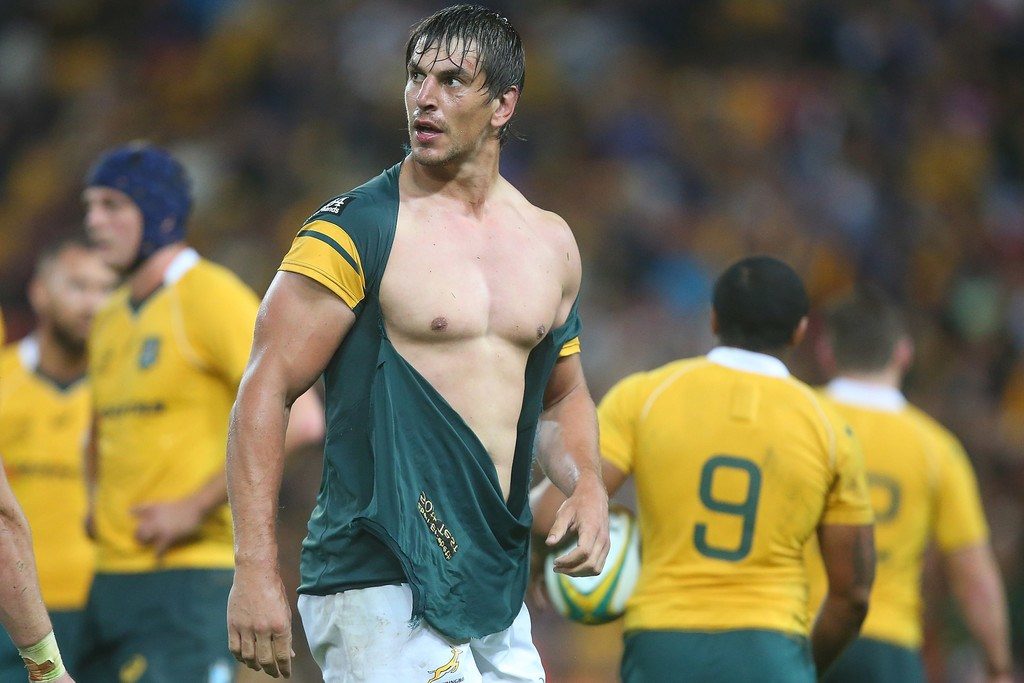 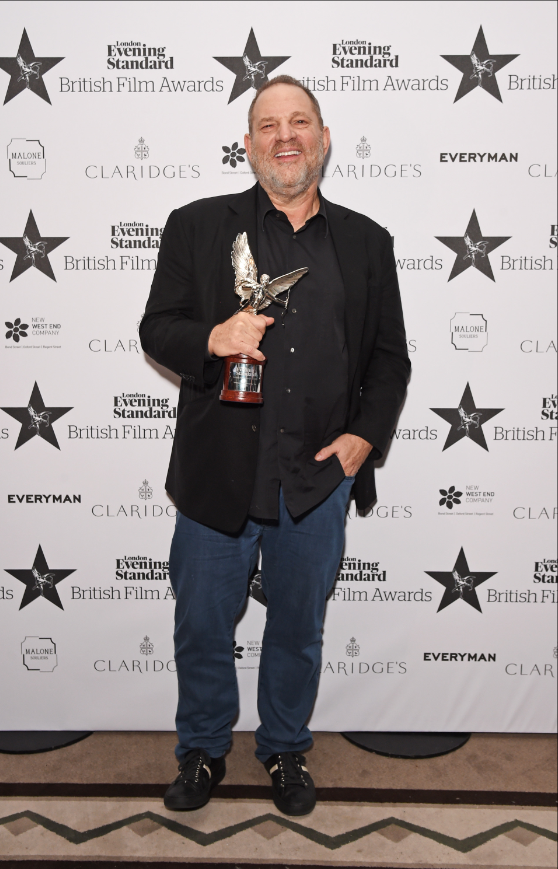 Weinstein is a disgusting fat slob, and if you listen to the audio recording here he sounds like the biggest whining, beta male you’re ever likely to come across. The feminist reaction to the Weinstein revelations says more about what sort of men these women hang out with than men in general. Here’s Laurie again:

Well, speak for yourself, Laurie! While she might like to count rapists among her friends and partners (and if her previous writings are any guide, she does), I’d like to think most normal women don’t socialise with rapists. She compounded her idiocy with this:

And this is what it comes down to: feminists like Laurie Penny couldn’t give a shit about women, they only care about advancing their own fucked-up agenda. They have seized on the issue of powerful, shitbag men preying on vulnerable girls with the willing assistance of powerful, shitbag women in order to demonise ordinary decent men. Third-wave feminism is as much a danger to young women as fat slobs like Harvey Weinstein and his phalanx of groupies. It’s time more people realised this.

25 thoughts on “Feminists and Harvey Weinstein”