A couple of readers sent me the link to this story:

It remains the mystery at the heart of Boeing Co.’s 737 Max crisis: how a company renowned for meticulous design made seemingly basic software mistakes leading to a pair of deadly crashes. Longtime Boeing engineers say the effort was complicated by a push to outsource work to lower-paid contractors.

The Max software — plagued by issues that could keep the planes grounded months longer after U.S. regulators this week revealed a new flaw — was developed at a time Boeing was laying off experienced engineers and pressing suppliers to cut costs.

Increasingly, the iconic American planemaker and its subcontractors have relied on temporary workers making as little as $9 an hour to develop and test software, often from countries lacking a deep background in aerospace — notably India.

In May I wrote a post about how I thought the cause of the Boeing 737 Max crashes was as much organisational failure as technical fault. The Devil’s Kitchen reposted it on Facebook and someone appeared in his comments: 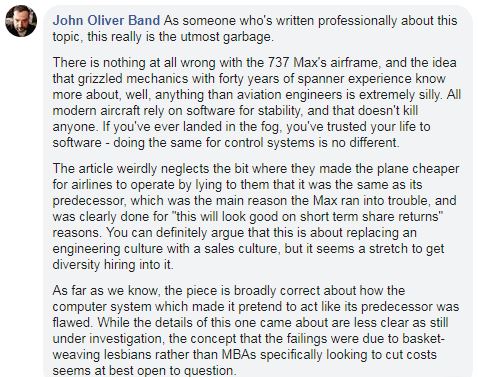 His response is pretty much what you’d expect from an engineer: appeal to his own authority and then dive head first into the details of his own area of expertise thus missing the broader point. Nobody is saying that diversity policies at Boeing caused the technical failure. Instead, I am talking about organisational failure whereby a company which is prioritising diversity to the extent they have 42 councils devoted to the issue is likely to lose focus on other areas. This in turn leads to poor practices being adopted and standards dropping in certain places, which combine to deliver less than optimal outcomes. Sometimes this manifests itself in higher staff turnover, other times a less efficient production process, others lower revenues, and so on. In such an environment, the risk of a problem going undiscovered or kludged increases, and the more complex the organisation the greater that risk. This is organisational failure leading to technical failure.

One of the biggest hazards a complex organisation faces is losing control of its supply chain. This is what I think happened in the Miami bridge collapse: there were a lot of subcontractors and nobody seemed to be in overall charge. It’s not that the engineers were necessarily bad, it’s just the management didn’t seem to have an idea what was going on, let alone were in control. So getting back to the story of the Indian software engineers on $9 per hour, I doubt the root cause of the 737 Max malfunction was some ill-trained programmer tapping in the wrong code because he was distracted by the cricket. But what it does tell you is that Boeing appears to have lost control over its supply chain to the degree that practices are popping up in it which probably shouldn’t be there. This is organisational failure, and although it is not caused by having the top management so focused on diversity, the fact that the top management is focused on diversity is a reasonable indication of organisational failure. Which can be denied – right up until planes start dropping out of the sky.

37 thoughts on “Pride before the stall”