I can’t honestly say that this story surprises me:

Supermarkets are selling customers billions of 10p ‘bags for life’ which contain twice as much plastic as 5p single-use bags, it was reported last night.

British retailers handed out a total of 1.18billion of them last year – at a cost of around 10p a bag. In the 12 months to the end of June, Tesco distributed 430million bags for life – the highest number for a supermarket.

What did they think would happen when they banned single-use plastic bags? That people would cart groceries home in their pockets? 1.18 billion multi-use shopping bags is one hell of a lot of plastic. Back in August 2016 when I first got the carrier bag bee in my bonnet, I asked:

Why is it assumed that a reduction in plastic bag use makes the world a better place? … Does using stronger, reusable plastic bags offer an overall improvement?  If so, where are the studies to back it up?

A few months back, reader David Bishop alerted me to this Danish study (.pdf) into the environmental effects of different types of carrier bags. It looked into how some bags can be reused for a secondary purpose, e.g. for lining a bin, and at both the “climate change” impact and “other environmental impacts” of each type of bag. For ease of understanding, the traditional polythene carrier bag is called LDPE in this study, and the “bags for life” most supermarkets dish out are called PET (see pages 25-27). The killer info is in Table IV of the executive summary (pages 17-18) which shows how many times each type of bag must be reused to have an environmental benefit over the carrier bags our benighted governments banned: 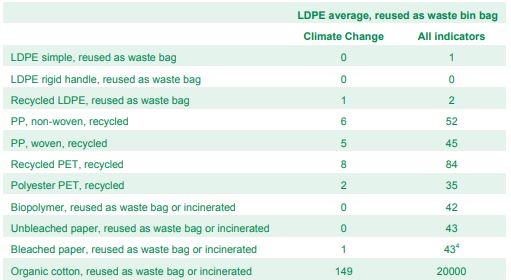 What this tells us is that the PET “bags for life” – of which, let’s remember, 1.18 billion were sold in one year alone following the carrier bag ban – must be reused 35 times before they’re better overall for the environment. Amusingly, the recycled PET bags are worse for the environment, and need to be reused 84 times. Very few people, particularly the dim middle classes who campaign for environmental legislation, understand that recycling is an industrial process like any other only with different inputs. What the table above shows is we’re better off using PET bags made from fresh polyester than from recycled materials. (Incidentally, Tim Worstall has been banging on about how nobody considers the overall resource inputs when calling for everything to be recycled for years.)

So how many people use their PET bags 84 times? I’m not sure, but this table is interesting, no? 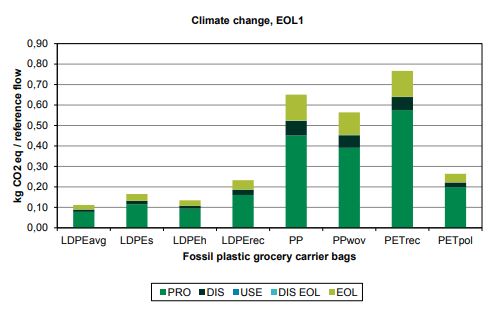 Look at the difference in CO2 emissions for the production of normal LDPE carrier bags and the PET bags so loved by greenies. Of course, someone will start going on about plastic in the ocean and a turtle offshore Bora Bora with a biro up its bum, but aren’t CO2 emissions supposed to be the greatest threat to mankind ever?

And look at the other types of bags. Paper bags, which have sprouted up in the vegetable sections in supermarkets all over France, need to be reused 43 times before they’re better for the environment than polythene bags. Who the hell reuses a paper bag once, let alone 43 times?  This is probably due to the fact that to make paper bags you first need a forest, and that takes up land. This is what makes the cotton bags which SJW’s adore so damaging: you’d need to use it 7,100 times before its environmental benefits are felt. If it’s made from organic cotton, it needs to be reused 20,000 times. That’s a lot of shopping. The report explains why (pages 69-70):

The environmental impacts connected to the production of the organic cotton bag (COTorg) were considerably higher than those of the conventional cotton bag (COT). This is due to the fact that organic cotton production does not involve the use of synthetic chemicals such as fertilizers and pesticides, which lowers the yield of the cultivation. Eventually, more resources and land are required to produce the same amount of cotton than in conventional cotton cultivation processes.

But we should remember, none of this legislation is rational. It is part of a quasi-religious culture whereby the wealthy middle classes (particularly women) need to signal their virtue having quit going to church a generation back. Therefore, the results don’t actually matter. Back in 2016 I wrote this:

For if we accept the use of plastic in itself is bad, why carrier bags?  Should we ban Bic biros and force everyone to use pencils?

And indeed, the EU has recently approved a ban on single-use plastics. This will have two effects. Firstly, substitutes will be found which, as we’ve seen with shopping bags, are worse for the environment than the thing they’ve banned. For instance, cotton buds will soon be made from wood, which means more forests, more land clearances, and more lumber mills. Is this better or worse than using plastic? Does anyone even care? Secondly, it will become apparent that there were very good reasons related to hygiene and health why single-use plastics have been adopted for certain applications. It is unlikely the EU mandarins have identified all these and excluded them from the legislation.

I started my one-man blogging campaign against the carrier bag ban by invoking Chesterton’s fence. I believe my doing so has was justified, but the arrogant fools who rule us and those who support them have yet to learn a damned thing.

17 thoughts on “I told you so, carrier bag edition”