Ministers do not know the impact funding cuts have had on police forces, the UK’s public spending watchdog says.

According to the National Audit Office, the Home Office does not know whether the police system in England and Wales is “financially sustainable”.

It calls the approach to police funding “ineffective” and “detached” from the changing demands faced by officers.

Changing demands, eh? Such as dealing with reports of non-crimes sent in by the public at the behest of the police themselves? 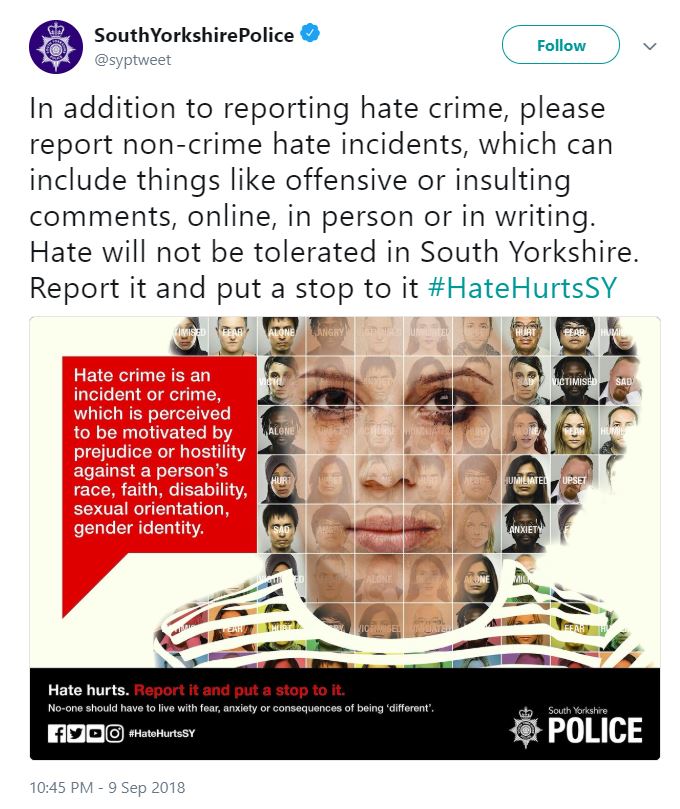 Now it may be the police are understaffed and underfunded, but one thing is for sure: the allocation of existing money and human resources in British police forces is an absolute disgrace.

But put that aside for a minute and consider what South Yorkshire police are saying here. Not content with prosecuting people under the dangerously vague and arbitrary definition of “hate crimes”, they now see fit to hound the population for expressing unapproved opinions which don’t even fall under that category. In other words, whatever you say is Plod’s business. Lest you think I’m reading it wrong, here’s how they clarified their position in a later Tweet:

This has gone viral and many people are outraged, but the tin ears of the British police and whoever in government they take their orders from are legendary; shame isn’t a word in their vocabulary. Proof of this comes in no better form than the fact that South Yorkshire police, by refusing to take complaints seriously through fear of being called racist (or perhaps out of ethnic solidarity with the perpetrators), were complicit in allowing Pakistani rape gangs to abuse dozens of underage girls in Rotherham for years. And here they are, smug as ever, trying to bully into silence ordinary citizens who they happily admit committed no crime.

The British police are rotten to the very core; scrap the whole lot of them and start again.

16 thoughts on “The Shamelessness of South Yorkshire Police”