MC in the comments alerted me to this story, which has now blown up on social media:

A lifeboatman who served with the RNLI for 15 years was sacked alongside his junior colleague for having mugs with naked women on them in the office.

Whitby crewman Ben Laws and his workmate Joe Winspear were allegedly sacked over the phone on Tuesday.

The pair are reported to have swapped the ‘jokey’ tea mugs for Secret Santa presents.

When a senior female member of staff found them at the headquarters in North Yorkshire, their jobs were brought into question.

The pair were initially told to destroy the mugs and that they would face no further action.

But the men, who are not paid for their work with the RLNI, then had to go through a disciplinary hearing that looked through their private Whatsapp messages.

According to the newspaper they were told they could no longer work at Whitby’s RNLI branch because the mugs could have been found by schoolchildren, which posed a ‘safeguarding risk’.

Okay, that’s the Daily Mail’s version. Here’s what the RNLI has to say:

We are restricted in what we can say, however we can confirm the investigation focussed on the production of inappropriate material of a sexual nature and associated social media activity directed at an RNLI staff member. We are aware of speculation about the issue on social media but we want to stress that this was not a trivial matter.

I doubt this is only about the mugs, and I suspect there was a little more to it than that. However, I expect whatever took place was done with the full consent and involvement of everyone concerned – men and women – and the complaint came from someone who caught wind of it in passing. I would bet a year’s salary that the “senior female member of staff” was a visitor to the office, a corporate functionary who had about as much to do with lifeboating as I do ballet dancing. As to whether it was a trivial matter, I suspect to any normal person it was, but to a modern corporate manager it was up there with the eruption of Krakatoa. You can glean the mindset by what follows:

The lifeboat station should be an environment where people can expect to be treated with dignity and respect. We cannot allow bullying, harassment or discrimination in what should be a safe and inclusive environment and there will be serious consequences for anybody who demonstrates this behaviour within the RNLI.

By challenging this behaviour, we are standing up for the thousands of volunteers who are committed to doing the right thing as they operate our 238 lifeboat stations, saving lives at sea around the clock, 365 days of the year. Our dedicated volunteers represent the values and principles of our organisation and we will not allow any behaviour that brings the work of the RNLI and our people into disrepute.

This is meaningless, empty guff which could have been pulled from the website of any one of a thousand corporations with a household name. I am sure the RNLI once embodied admirable values, but these have been replaced with a dreary morality code worthy of an organised religion, only imposed on people who worship at an entirely different altar. As I said recently:

It’s becoming increasingly obvious that being an employee is no longer about fulfilling what’s in your job description, but adhering to a vague set of moral values which are policed inconsistently by the sort of people who’d dob you in to the council for putting out the wrong bin.

The issue here isn’t the mugs or “the production of inappropriate material” any more than heretics being burned at the stake was a problem in itself; both are mere outcomes of a much larger problem. The CEO of the RNLI is one Paul Bossier. Here’s his CV: 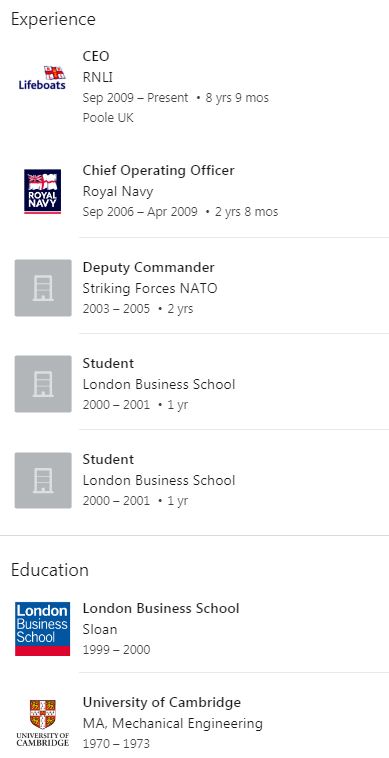 So he’s one of those intelligent types who carved out a career in the highly bureaucratic Royal Navy, an organisation in which career success is driven by backstabbing and arse-licking in equal measure (with apologies to Jason Lynch and Surreptitious Evil). He also went to business school, where no doubt he learned all about power-point presentations, opaque decision-making, dubious ethics, top-down heavy-handedness, and poorly thought-out corporate procedures. The traditional values of the RNLI disappeared the moment somebody on the board of trustees thought this is the type of man they wanted to head their organisation. I suspect he wooed them with all sorts of guff about “efficiency” and “modernisation” and told them how the RNLI brand could be used to bring in millions more in revenues. I bet they mentioned actual lifeboats and the sea about once: as organisations, the Royal Navy is about as similar to the RNLI as Patel’s Taxis are to the McClaren Formula One team.

This latest incident in Whitby isn’t the first controversy the RNLI has had under Bossier’s watch. Here’s a story from last November:

THE States and the Island’s Harbourmaster knew the RNLI was going to take St Helier’s all-weather lifeboat back to the UK, it has emerged.

In an open letter published online, the UK chief executive of the charity, Paul Boissier, said the decision was not taken lightly and local authorities were briefed to ensure contingency plans were in place.

He also described the RNLI’s decision to shut down the St Helier station last Friday as ‘justified and the right thing to do’.

The shutdown followed a breakdown in the relationship between volunteers and the charity which finally boiled over after months of simmering in the background.

Mr Bossier, a former Royal Navy serviceman, said that because of the broken relationship with the volunteer crew the RNLI could ‘no longer rely on their continued commitment’ and the only choice was to close the station.

Speaks volumes, doesn’t it? How many years were these lifeboatmen risking their lives at sea before this Cambridge-educated ex-Royal Navy business school graduate turned up and started imposing cack-handed, top-down corporate policies on them from afar? And note that not only is Bossier taking the all-weather boat back to the British mainland, but:

Speaking about almost £7 million of donations held in a bank account for use in lifesaving in Jersey, Mr Boissier said: ‘There is a restricted fund balance of nearly £7m for Jersey.

Nice, eh? The good people of Britain cough up the money for an all-weather lifeboat and £7m surplus cash so some brave Jerseymen can do what they can to save lives, and it’s now being purloined by a bloke on £162k per year as if they were any other corporate assets. I don’t know how many other incidents there are like this, but the public fallout over the incident in Whitby is having people cancelling their donations in droves. Good.

As an organisation grows and gets more wealthy, parasites in the form of professional “managers” come in and use the excess cash to feather their own nests and set about building their own little empires. In effect, the organisation splits in two. You have a ruling class, sitting in plush air conditioned offices pushing progressive agendas and advancing their careers; and you have everyone else, including those tasked with fulfilling the core function of the organisation. In the modern era, the disconnect between the two is so large they might as well be entirely separate entities on every measure except the logo and the last part of everyone’s email address (there are sharp parallels here with the political setup in western societies, too). Bossier could have just as easily gone to manage any other bloated, overfunded organisation as the RNLI: to these types, and those that cling to their coat-tails, the actual outfit they join doesn’t matter one jot. What matters is that it provides a vehicle for personal enrichment and career advancement. If Bossier quit tomorrow and became head of Birmingham City Council, to be replaced by the guy who sent Carillion into bankrupcy, would anyone be surprised? Would anyone notice? These people are as interchangeable as they are dangerous.

The answer to this problem is hinted at in this passage from an excerpt above:

If you want to rescue people at sea then you must join an outfit which rescues people at sea, not one that roams the land identifying problematic mugs. As I’ve argued before on this blog, I believe the future lies in small, independent entities made up of a handful of people doing the actual work that needs doing, feeding where they can off the bloated carcasses of organisations headed by people like Bossier. The more people who realise this, and start to avoid interacting with large organisations for any other reason than fleecing them, the better.

27 thoughts on “The Whitby RNLI story is not about mugs, or even the RNLI”