Yesterday I came across a bizarre interactive webpage on the BBC’s world service website which, I think, is there to help foreigners harangue Americans about their gun laws. It starts by allowing you to pick your character:

1. Charlene, a rootin’ tootin’ gun lovin’ redneck who doesn’t like other people very much.

2. Akinjide, a Nigerian on holiday from Lagos.

Why the BBC feels the need to help Nigerians deal with Americans they encounter on a bus to Phoenix using money taxed from the owners of televisions in Britain I don’t know, but here we are. Now I don’t know what bus this scenario is supposed to take place on, but from the description my guess would be it’s a Greyhound. Can you take guns on a Greyhound? No. So we’re already in fairyland, and it doesn’t get much better. I’ll post a few of the remarks each character is supposed to be saying:

I hardly think someone from Lagos is going to argue the prevalence of legally-held guns is a requirement for a country to suffer serious levels of violent crime. You’d also not likely find a Nigerian who doesn’t appreciate guns are useful when it comes to protecting yourself, your family, and your property – particularly in a place where violent criminals have easy access to them. Besides, private gun ownership is not prohibited in Nigeria.

It is highly likely that any Nigerian travelling on a bus to Phoenix will know someone back home who has had their home invaded by armed intruders, and probably know some who’ve been shot dead. Even moderately wealthy Nigerians are terrified of armed thugs murdering them during a robbery, hence they erect high, glass-topped walls around their houses with sturdy gates and often lived in secure compounds with armed guards. Nigerians might find American gun laws daft, but few would dismiss the danger home invasions represent.

Sorry, who is supposed to be speaking here? A Nigerian from Lagos or some woke British paleface who reads The Guardian? Did the person who wrote this actually know any Nigerians?

This is probably how the BBC thinks gun-carrying southerners speak to people, particularly black men who sit beside them on the bus. I suspect the author is basing the character on people he or she met in New York – where they do speak to each other like this – rather than anyone in Texas or Arizona where they’re unfailingly polite (in part because so many of them are carrying guns). 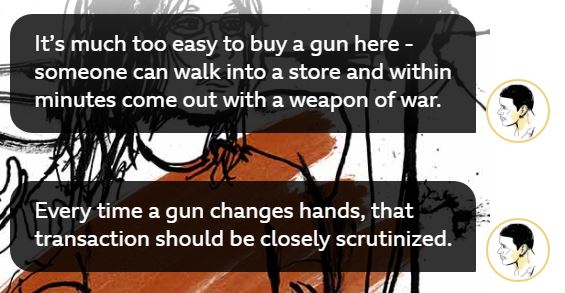 The BBC seems content to portray Africans as wholly ignorant on the subject of American gun laws. As Ali G would say, isn’t that a bit racist?

Of course, Nigerians are generally conservative, devoutly religious, and know all too well that armed government employees can be as much a source of death and mayhem as any run-of-the-mill criminal. But not the Nigerian featured here, oh no:

Somebody from Lagos wept as he watched news footage of people talking about a gun massacre in the US after the event? Are we sure this guy is from Lagos?

Naturally, this is presented as a scenario which is abhorrent to Akinjide, who has presumably forgotten there are armed guards everywhere in Nigeria.

Now this webpage isn’t completely useless, offering as it does a useful insight into how staff at the BBC view Americans and Nigerians, but as advice on how to approach the subject of gun control in the US it’s more likely to get you killed as enlighten you. I have travelled on an overnight bus to Phoenix and it was full of people who looked as though they were on their way to rob a bank. The two guys in front of me were both felons, and had a lively conversation over whether it’s better to be imprisoned in Virginia – where a man on horseback with a rifle guards you as you pick up trash from the side of the road – or Arkansas where it’s a man on foot with a shotgun. At the back was a US Marine who was half-insane and spent several hours hurling foul-mouthed abuse at his girlfriend down the phone. Anyone who started acting like this Akinjide in the story would probably be killed by someone’s bare hands. Thankfully most Nigerians, the ones the BBC doesn’t know about, are sensible enough to keep the topic of conversation to beer, women, and football.

43 thoughts on “Casual Racism from the BBC”