There is a problem with this, but possibly not the most obvious one:

An armed officer assigned to the Florida school where a gunman killed 17 people last week stood outside the building during the shooting and did not intervene, the local sheriff says.

“I am devastated. Sick to my stomach. He never went in,” Sheriff Israel said.

On the face of it, the officer should have gone in and tackled the shooter, as he ought to have been trained to do. The possibility of coming up against armed criminals is why they’re given guns after all, and considering an unarmed ROCT cadet of 15 years of age sacrificed himself to save his fellow pupils, it’s pretty poor that this policemen stood outside and did nothing. Worse, he allowed the gunman to leave the building, thus endangering more lives.

Sheriff Israel said Mr Peterson was on campus, armed and in uniform when the shooting at the Marjory Stoneman Douglas High School campus in Parkland began.

He said video footage showed Mr Peterson arriving at the building where the shooting was taking place about 90 seconds after the first shots were fired and that he remained outside for about four minutes. The attack lasted six minutes, Sheriff Israel said.

Asked what Mr Peterson should have done, Sheriff Israel said: “Went in, addressed the killer, killed the killer.”

Mr Peterson is yet to publicly comment on what happened. Sheriff Israel said he had not given a reason for why he did not go into the building where the shooter was.

So we can add an ineffective deputy policeman to the litany of FBI and Sheriff’s department screw-ups which led to this incident. But the NRA is to blame really, oh yessir.

However, it has been pointed out on Twitter that policemen are not obliged to put themselves in danger to save others, despite many people understandably thinking they ought to, and it’s what they’re paid for. Personally, I’ll not criticise the individual too harshly. Nobody wants to go and get shot and this chap probably didn’t realise he’d have to face down a lunatic with an AR-15 one day; when the time came, he bottled it. Yes it’s cowardly but it’s also human and understandable. Would I have done things differently? I have no idea and hope I’ll never find out, but physical courage isn’t doled out evenly and some people find out they don’t have it until it’s too late. So yes, let’s beat up on this guy a bit but consider he’ll have to live with the guilt and opprobrium for the rest of his life. If his family don’t have him on suicide watch right now, they’re guilty of negligence.

The wider problem is that there have been several high-profile instances of the police shooting unarmed men recently. Firstly there was this story about a policeman in Arizona shooting an unarmed man who was lying on the floor of a hotel corridor clearly drunk and confused by the conflicting instructions being yelled at him by different officers. The justification for the shooting, heard at the cop’s trial in which he was found not guilty of murder, was that the suspect reached to his waistband and the policeman feared for his life thinking he had a weapon.

In body cam footage of the event, Mr Brailsford can be seen telling Mr Shaver to get on the ground and crawl toward him. Mr Shaver complies, crying and asking the officer not to shoot him. At one point, Mr Shaver puts his hands on his low back. The officer warns him not to do so again.

“You do that again we’re shooting you, do you understand?” he asks. Mr Shaver, visibly upset, says yes.

Seconds later, however, Mr Shaver reaches toward his waistband. Mr Brailsford told the jury he thought Mr Shaver was reaching for a gun. A detective investigating the shooting said the motion was similar to drawing a weapon, but was most likely an attempt by Mr Shaver to pull up his drooping basketball shorts.

The officer fired five shots at the suspect with his AK-15 rifle. Mr Shaver died on the scene.

Most reasonable people who’ve seen the video think this is absolute bullshit, but obviously the jury saw it differently.

Then there was another story of an entirely innocent man being killed by a SWAT team who were called to his house as part of a prank known as “swatting”:

In this case, Wichita local Andrew Finch, whose family members say did not play video games and was a father of two young boys, answered his door only to face down a SWAT team-level response. Allegedly, one officer immediately fired upon Finch, who later died at a hospital. It’s unclear why Finch, who is said not to have had a weapon on him, was fired upon.

Here’s the photo which accompanies the second story: 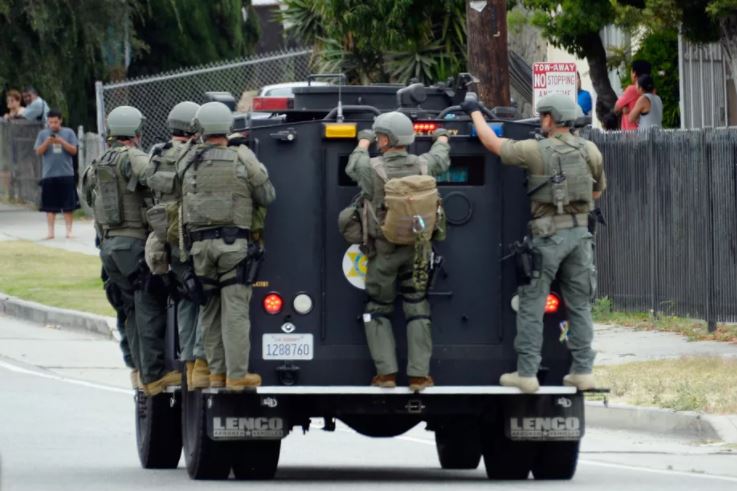 Many American police forces, especially the SWAT teams which seemingly every two-bit police department now has (and gleefully uses), go around in full combat gear and armoured vehicles looking as though they’ve come straight from Falluja. In fact, much of the gear the’re toting is indeed military surplus, which explains the look. In both the incidents I’ve recounted, the policemen were out in numbers, heavily armed, and wearing body armour and killed the suspect because he made a hand movement which someone thought might have meant he had a gun somewhere. The police defend such shootings by saying their officers have every reason to fear for their lives. Many of the public, quite rightly, complain that an officer “fearing for his life” when part of a small army and facing a man who may well not be armed ought not to be a license to murder citizens going about their lawful business. These instances are not cases of a lone patrolman suddenly being confronted by a criminal in a dark alley, but the police chiefs treat them as if they were.

Possibly the only way the American public will accept police departments turning up mob-handed and killing innocent people is if, when faced with a real dangerous criminal who is unequivocally armed and murdering folk, they will jump in without hesitation and deal with him. Instead, in Florida, we have a policeman deciding it’s all a bit too dangerous and not getting involved.

What this tells the American public is the police are happy to arm themselves to the teeth and shoot an innocent, unarmed person for making the wrong hand movement; but don’t expect them to tackle a lunatic with an AR-15 who is murdering kids in cold blood. In the UK, it often appears the more law-abiding you are and the less danger you present to the police, the more likely they are to visit violence upon you. It seems the Americans have unwittingly gone in for the same deal. Reversing that should be a top priority.

40 thoughts on “Avoid the gunman, but shoot the guy with no gun”