Last February, when Milo Yiannopolous was self-destructing, I wrote this:

I understand he used inflammatory language and controversial behaviour to get people to listen to him, but once he had the world’s attention it was time to take it down a notch and start portraying himself as a serious, mature individual who beneath the act is really worth listening to. Instead he stuck with the jokes about sucking black dicks, “feminism is cancer” remarks, calling Trump “Daddy”, and others, all of which were crucial parts of his early “game” of getting attention but made him look as though he was never going to be serious about anything and was purely a professional attention-seeker.

Shortly after this episode, the publishers Simon & Schuster cancelled his book deal, for which he’d been paid an $80k advance (Milo claimed at the time it was $250k). Milo took umbrage at this and sued Simon & Schuster claiming $10m in damages. As a result of this lawsuit, the first draft of Milo’s book Dangerous is now publicly available on the New York state courts’ website, complete with editor’s comments. It can be downloaded from here in .pdf and boy does it make for some grim reading.

Firstly, it is obvious that Milo had no intention of toning down the infantile jokes. Sure, they’re funny once or twice when he says them in front of an audience who didn’t know what to expect, but they quickly got tiresome and the book is full of them. What makes it worse is this brand of humour doesn’t translate into print well.

P.J. O’Rourke once wrote an article called “How to Drive Fast on Drugs While Getting Your Wing-Wang Squeezed and Not Spill Your Drink”. It was snortingly funny and got him a lot of attention, but he never used a title like that again (or made many sexual jokes) because it’s only really funny once. Milo hasn’t worked this out, and nor is he anywhere near as clever and funny as P.J. O’Rourke. Consider this for example:

And compare it to this from O’Rourke:

The French are a smallish, monkey-looking bunch and not dressed any better, on average, than the citizens of Baltimore. True, you can sit outside in Paris and drink little cups of coffee, but why this is more stylish than sitting inside and drinking large glasses of whisky I don’t know.

O’Rourke had the extremely rare skill of being able to apply off-hand humour while still making serious points. Milo, as we can see, simply isn’t gifted enough to do this.

The other thing that doesn’t translate well to print is Milo’s ego. Self-aggrandising comments work well enough verbally, but they really grate in the written form.

Unless the author is writing as an obvious alter-ego and staying in character, self-depreciation is far more effective and amusing than self-aggrandisement.

This might not matter so much were Milo capable of making the serious points well. Sadly, it seems he isn’t: 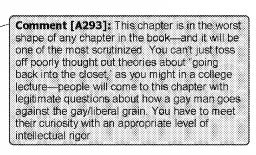 This one is especially scathing:

While some people are showing sympathy for the editor who had to go through this mess, many are asking what Simon & Schuster expected. Milo’s fans would say that Milo has simply written what would be expected of Milo, which is undoubtedly true. I suspect what happened was Simon & Schuster thought they could cash in on the Milo phenomenon and were perhaps persuaded by his articulate and consistent verbal arguments, without realising he can’t write for toffee. And I think that’s the problem here: Milo simply can’t write, or if he can, he decided not to apply his skills here. There are rumours that it might have been ghost written, which doesn’t say much for the ghost. Even for a first draft, this is poor and it’s not surprising Simon & Schuster are using it in defence of their cancelling the contract. Whether they are successful or not remains to be seen; if they’re not, I can’t see anyone having much sympathy for them.

I found all this particularly interesting because the story came about as I was implementing my editor’s comments on my own book. Thankfully I received very few comments of the nature of those above, although this might be because I was paying him. If he’d shovelled eighty grand in my direction in advance of the manuscript, he might have been a little less forgiving. But another reason could be that I didn’t send a first draft to my editor, he got the third draft after I’d gone through it twice removing anything I thought was superfluous. I actually read every line out loud, as if I were on a stage. It’s a good way of seeing how the text flows and if a joke falls flat.

I must thank my readers for helping me with this. When I posted an excerpt of the first draft a lot of people jumped in and told me, quite bluntly, that it was overwritten shite and I should lose at least 50% of it. Someone patiently explained I should write the scene rather than describe it word for word, and introduced to me the concept of being efficient with words. Then Adam Piggott rang me up on Skype and told me it was sub-Dan Brown garbage and if it went to an editor like that he’d be robbing me blind. None of this was particularly easy to take but, armed with a much more critical eye, I was able to make major improvements for the second draft. I was determined that whatever I sent to the editor would not have his eyes rolling, and that he’d at least see I’d made the effort to get the manuscript as good as I could on my own. This is why I didn’t have any problem accepting the editor’s comments. I’d already taken the beating after the first draft; his comments were extremely benign by comparison.

If Milo had run his stuff by someone first, he might not have saved his contract but he’d at least have avoided the humiliation of having editor’s comments like these plastered all over newspapers. He eventually self-published his book, but it didn’t do very well. Writing, it appears, is difficult and requires a lot of effort. Who knew?