A story doing the rounds over the last couple of days concerns Lindsay Shepherd, a teaching assistant at Wilfrid Laurier University in Canada. Briefly, Miss Shepherd showed her class a video clip of a televised public debate featuring Jordan Peterson, who is either a Nazi or a fairly normal chap depending on your point of view, in order to demonstrate that there are two sides to every debate. She was then hauled over the coals for several hours and reduced to tears by these two fuckwits: 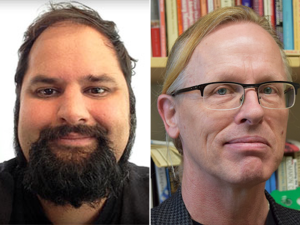 David Thompson has the story covered and I recommend anyone interested pops over there and reads both the post and the comments. The case has caused outrage, mainly because Miss Shepherd was smart enough to record her bollocking and lay bare the Kafkaesque bullying she received at the hands of her supposed academic superiors. This article from the National Post gives a flavour, as does this one from the same place regarding one of the professor’s pathetic apology.

But it was this tweet which caught my attention, referring to those interrogating Shepherd:

It’s because they are ultimately relying on authority, and know that reiteration gets them where they want eventually, without having to come out and say so. After this, they feel justified to use the “In our previous meeting we all agreed” line.

It would be tempting to convince ourselves that such behaviour exists only in the clown-quarter that is western academia, but what Freek Groeneveld describes is widespread throughout many modern organisations, including corporations.

Firstly there is the relying on authority. I don’t know how many times I’ve been sat in front of someone who has dared speak to me in a certain way solely because he or she sat above me in the company hierarchy. Had the roles been reversed, they’d never have uttered a squeak; had the situation arisen outside of a work environment, they’d have been lucky to avoid getting a slap. In the brief periods I’ve been a manager I learned that if you are relying solely on your authority then you’re already in trouble. By all means use your position to make a decision, but if you rely on it to prevail in an argument it’s a sign you’ve already lost. If you rely on it to manage your people effectively, then you really shouldn’t be in the post. Nobody who has earned the respect of their subordinates should be relying on their position in the managerial hierarchy (technical hierarchy is somewhat different); that should be almost incidental if you’re managing people properly.

Secondly, there’s the “we all agreed” line. Too often I have heard the words “it was discussed” in relation to a subject that was briefly mentioned in passing, rapidly glossed over, or delivered in a monologue by a manager to a subordinate. It’s a deliberate ploy to lay the foundations for the next step in a process without the necessary bother of having to make a proper case, secure agreement, or listen to dissent.

The mistake Miss Shepherd made was to cooperate with what was obviously a kangaroo court. I can see why she did, but she’d have been better off understanding that the people she was dealing with were not acting in good faith. They were not seeking an explanation, they did not want to give her an opportunity to salvage her reputation, the whole process was set up so they could exercise their power over someone in a compromised position. The whole charade was a demonstration of their power, authority, and egos – and this is true for so much of what passes for management in modern organisations.

I know this is easy to say, but she ought to have flipped the script on them. You’ve seen how frustrating little shitlord kids are, the sort you see on police reality TV shows having been caught shoplifting. When questioned they interrupt, deliberately misunderstand the question, respond to a question with one of their own, ignore their interlocutors for periods, etc. and generally show utter, complete contempt towards the people in front of them. Miss Shepherd should have opted for a form of this. e.g. by laughing in the guy’s face when he uses some stupid term like “positionality” and say “What? What the hell does that mean? Did you just invent it?” She should have shaken her head confused and asked the guy to repeat himself, and then start looking out the window when he’s halfway through doing so. There are a million passive-aggressive tricks she could have pulled to signal her contempt for the whole process and the people conducting it.

The reason she didn’t do this is because, like thousands of Soviets who were hauled before similar tribunals, they believed they’d done nothing wrong and thought cooperating would make them leave her alone. She would have worried that if she didn’t cooperate they’d punish her, possibly by firing her. We all have bills to pay, and we all need a job. This is why so many people allow themselves to get bullied by those above them in the hierarchy: they think by cooperating with unreasonable people they’ll get treated less harshly. Nothing could be further from the truth.

I suspect she was finished from the moment they hauled her in, and the only way to save herself was by fighting back – hard. She – and anyone else in a similar position – needs to understand that the worst that can happen is you lose your job: you’re not going to get shot or sent to a Siberian camp, so grow some fucking balls. Secondly, she ought to have flipped the script in the way I described until one of them loses their cool and says something which could get them fired. Or something close to it. Then she needed to walk out and pen a letter to the head of the university describing her version of the meeting, shorn of all context and scattered liberally with terms that lawyers like to use in divorce hearings. In other words, assume the role of bully for herself and go on the warpath. It might not work, and she might get fired anyway, but it might also make them back the hell off, or at least get them on the defensive and having to explain their actions. And it’s better than grovelling in front of a star-chamber.

This is how anyone should deal with a bully in any organisation. Note that I mentioned her letter should be shorn of context. This is important. A mistake a lot of people make is to write thousands of words when lodging a complaint or defending themselves, whereas the whole idea is to give the other person the biggest headache possible. I remember once being asked to sign a document I didn’t want to. I thought about writing an explanation why, but in the end I simply wrote:

“I have no intention of signing this document.”

and left it at that. Let them come back to you to find out why you won’t sign it. If you’re going to be treated like shit, don’t make it easy for them. Simply resort to one sentence replies and make them run around trying to work out what you’re thinking. Here’s another I’ve used, in its entirety:

“Your email appears to contravene the corporate ethics policy.”

I never said how or why: let them figure out what you could possibly mean. Give them a sleepless night or two. Get the headache on their desk, and off yours.

I wish more people stood up to bullies, and to Lindsay Shepherd’s credit she gave it a damned good shot; by recording the meeting and making it go viral, she’s probably going to have the last laugh. But the way to stop this thing from happening in the first place is for people to grow a pair and not cooperate. If people could stand up and shout down Stalin’s show-trials, we ought to be able to stand up to wankers like those at Wilfrid Laurier University at the risk of getting a bad report.