Earlier this week, a judge by the name of Roy Moore stood accused of sexually assaulting a teenage woman in Alabama, the state for which he will shortly run for senator as a Republican. The accusations date back decades meaning we’re never going to find out what happened, but the guy comes across as a slimy bastard at best: he did an interview with Sean Hannity which only served to make him look shiftier, and the comments from his lawyer can’t have helped much. If he had any sense he’d withdraw from the race, and Republicans would back someone less dodgy.

The trouble is, Moore has become the trench in which many Republicans have selected to fight what they see as Democrat hypocrisy, particularly over Bill Clinton. Why should Moore resign over ancient, unproven allegations of sexual assault when the Democrats defended Slick Willie for decades and still wheel him out at fundraisers and election campaigns? The Republicans have a good point, but defending Moore is an odd way to go about it: certainly, I’d not want to be among those defending him. Innocent until proven guilty is an important principle to uphold when dispensing justice, but I am happy to accept a lower burden of proof when someone is merely running for office.

But things took a stupid turn yesterday when former comedian and Democrat senator Al Franken was accused of forcibly kissing and groping a model by the name of Leeann Tweeden when they visited Iraq in 2006. A picture has emerged of Franken allegedly groping Tweeden as she sleeps: 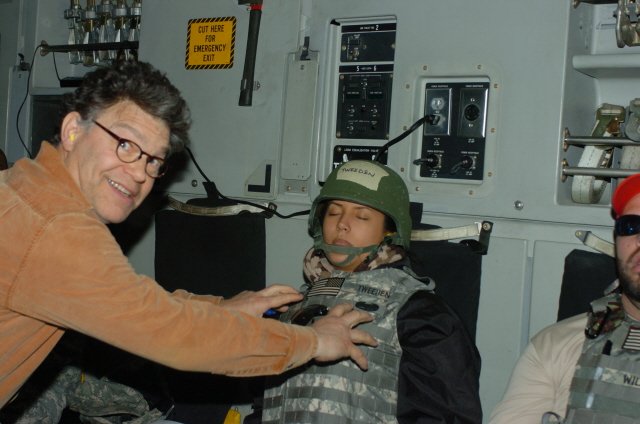 This photo – taken by Franken’s brother – is being held up as being proof of Tweeden’s allegations and a lot of people are now calling for his resignation. The way things are going, they’ll probably get their way.

Now I really don’t like Franken. I didn’t know of him until I saw him question Neil Gorsuch, Trump’s Supreme Court pick, during his nomination hearings and he came across as a deeply ignorant partisan fool. If he resigns it’s hard to see how American politics would be worse off, but to do so on the basis of that photo is stupid. Now it’s clear Franken is an idiot and taking photos like that is not the wisest thing to do. But it was before he was a senator at a time when he was a comedian, or what passes for one these days, and it was obviously meant as a joke. Tweeden is asleep but wearing a flak jacket, and it’s not even clear that Franken’s hands are touching it. It is humiliating for Tweeden, and Franken should have been given a bollocking for it, and perhaps Tweeden’s claim that he forcibly kissed her should be taken more seriously – but to say this photo is proof of sexual assault on the same level as that which Moore is accused of is absolute nonsense.

It’s probably been a long time coming, but America is in the middle of a moral panic over sexual assaults both real and imagined. Unable to deal with it sensibly, everyone is just digging political trenches and lobbing hand-grenades at the other side when this ought to have nothing to do with politics at all. Unfortunately, everything is about politics these days and as such we’re being subject to ever-more bizarre displays of political posturing. The worrying thing is I don’t think we’re anywhere close to rock-bottom yet, and moral panics rarely end well.

25 thoughts on “Al Franken is an arse, but he shouldn’t resign over this photo”