There was much wailing on Twitter yesterday after French satirical magazine Charlie Hebdo came out with this cover: 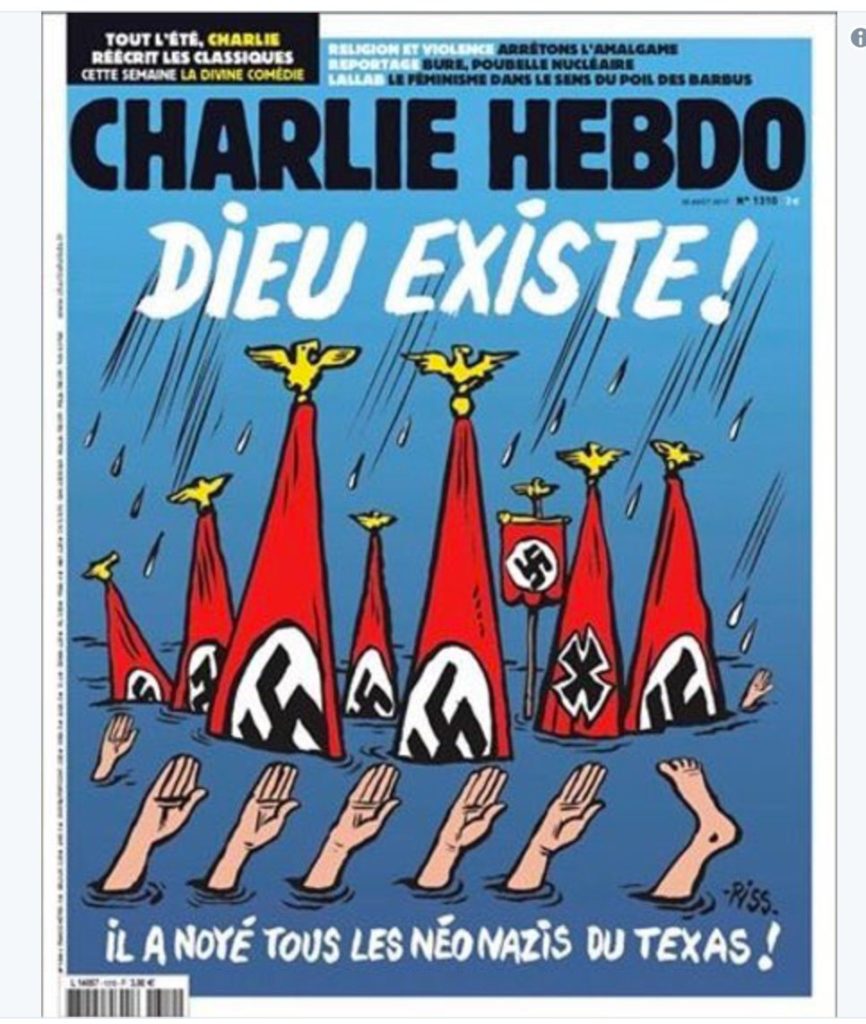 “God exists! He drowned all the Texas neo-Nazis!”

The complaints were mostly in the manner of:

1. After this, don’t expect sympathy when your offices are shot up again.

2. How many Texans died saving you from real Nazis?

That last one makes the mistake of thinking Charlie Hebdo stopped lampooning Islam after the massacre in their offices in January 2015: they didn’t.

To be fair, I didn’t read anyone saying Charlie Hebdo should be silenced over this – most of the complaints were from the political right, not the infantile left. But they kind of miss the point.

Charlie Hebdo is a satirical magazine, and their MO is to publish the most offensive take on whatever the leading story is that week. They do this to shock people into understanding what thoughts might be out there, and remind everyone that people are free to hold them. Anyone who looks at the front cover above and thinks “Oh my God, they think Texans are Nazis and they’re laughing at the dead!” doesn’t understand Charlie Hebdo or satire. Whereas I have no doubt most of those at Charlie Hebdo are politically of the hard-left which dominate institutions in central Paris, you’d be mistaken if you believe their magazine exists to promote their political views. They’re a scattergun, take-no-prisoners outfit proving points which most people would rather shy away from acknowledging.

In the aftermath of the attacks, I never thought Charlie Hebdo was looking for sympathy. Rather, I think they wanted the assurance that what they were doing was perfectly okay and the attack they suffered was in no way justified. Instead they got weasel words, obfuscation, crocodile tears, and people saying perhaps they deserved it. One common opinion was that publications which deliberately go out of their way to offend people ought not to complain when there is a reaction. This misses the point: so long as Charlie Hebdo can continue to do what it does, everyone else is free to speak, write, and draw as they please. Once we enter into the territory of differentiating between deliberate and inadvertent offence, it becomes a negotiation with those who don’t recognise our right to do either and would rather silence us completely.

Charlie Hebdo is on the front-line of free speech, and they set out to prove it week after week. They don’t care about sympathy from Texans, they only want to make the point that if they can publish something as heinous as this then so can you, and if they are thinking such thoughts then so are plenty of others. Unfortunately, Charlie Hebdo is ploughing a lonely furrow. As I said in the aftermath of the attacks on their offices:

Nothing highlights the cultural gap between France and Britain more than the uncomfortable suspicion that Charlie Hebdo would not have lasted more than a year in the UK before being hounded out of business by the state and its backers in one form or another, as this article makes clear.

For all their faults, the French seem to take a more robust view of free speech than their Anglo-Saxon counterparts. There is no way Charlie Hebdo could be sold in Australia or Canada, and if the past few years is anything to go by, they’d likely be shut down in the USA too. People like to imagine that the French are thin-skinned, but you don’t see the sort of hand-wringing over offensive speech and ideas here that you do in America and Britain. They prefer to ignore it and focus on more pressing concerns – like which wine to have with tonight’s dinner.

Rather than getting upset about Charlie Hebdo’s puerile and offensive front covers, we should be glad that at least someone is putting them out there. If they weren’t, how could we be sure that speech was still free? And how would we know that what we said was not going to land us in trouble? It’s startling that the French understand this and can answer these questions, but those in the US cannot.

31 thoughts on “In defence of Charlie Hebdo”