The ZMan makes the following remark in a recent post:

After the election, I made the point that Trump was a warning shot to the ruling class. They had to reform and Trump was that opening for them. If not, the next guy was not going to be as easy to deal with as Trump.

It’s been almost 10 months since Trump’s election and still the ruling classes and those who support them, on both sides of the Atlantic, haven’t yet worked out why.

Last week, the German magazines Der Spiegel and Stern ran these on their front covers: 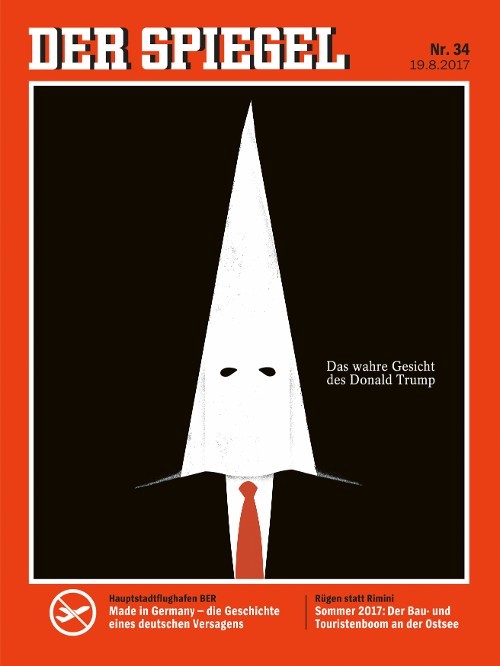 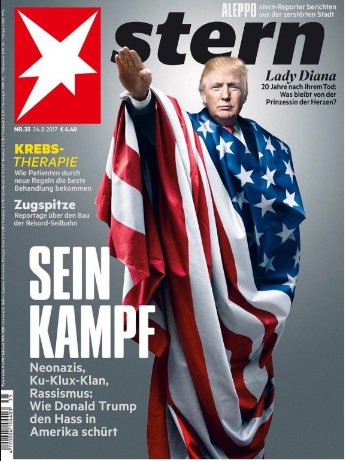 If social media is anything to go by, a lot of people out there claim to believe Trump is a white supremacist Nazi. The logic goes something like this:

1. Some Nazis protested the removal of a statue in Charlottesville.

3. People who hate Trump demanded he condemn the entire alt-right as Nazis, i.e. to tell a barefaced lie about one of his main political support bases. Trump declined, and condemned the idiots on both sides.

4. Trump is therefore a Nazi.

Apparently this New York property developer with a Jewish daughter, a TV celebrity who has been a household name since the eighties, is a Nazi. Who knew?

Of course, nobody believes Trump is a Nazi: if they did, they’d not be writing articles in papers using their own names calling him a Nazi, they’d be shitting themselves with fear. The Nazi label is simply the latest attempt to pin something on Trump which they hope will bring about enough pressure to get him to resign or be forced from office. We’ve had misogyny, taxes, and collusion with Russia and none of them worked, so they’ve gone with Trump’s a Nazi. Trump’s opponents are simply lurching from one baseless accusation to another in the hope the American public will at some point agree on one of them and turf him from office. They then assume everything will go back to how it was, with nice Republicans like Mitt Romney losing elections (while being called a Nazi) to an exotic Democrat who will focus on transgender bathrooms and global warming.

The way things are going, it wouldn’t surprise me if they succeed in preventing Trump seeing out his term. If this happens, many people will be absolutely ecstatic because they genuinely think this is all about Trump. It still staggers me the number of supposedly intelligent people who claim to follow politics and think that Trump is responsible for the social disintegration we’re seeing across America. Almost nobody from the chattering classes has bothered to identify and understand the political forces that plucked Trump from the primaries and propelled him to the White House, nor the rot that has set into the established political parties in the US which played an equally important role.

The chattering classes in Turkey had no problem ridiculing Recep Erdoğan during his slow rise to power either, confident they could contain him while dismissing his supporters as backward reactionaries that could be defeated by sophisticated discussions among themselves. At no point did the elites in Ankara and Istanbul listen to his supporters to figure out why they were voting for him, and look at ways to persuade these millions of people to come on board with their own policies. Perhaps they believed that beating him at the ballot box wasn’t necessary and they could just remove someone who didn’t do their bidding by other means? And look how that worked out.

Personally, I think Americans are incredibly lucky to have someone as benign as Trump being the one who stumbled on enough populist anger to get himself elected. If remarks about pussy-grabbing and over-zealous tweeting are their biggest concerns, they’re getting off rather lightly. The trouble is, the established order seems determined to ignore their good fortune and roll the dice again. Rather than trying to find out how Trump got elected and why, i.e. by identifying with those who voted for him and persuading them to vote differently, they think the answer lies in getting rid of him unfairly and installing someone else more to their liking. Trump’s successor, whoever he may be (and I don’t mean Pence), will quietly note that the rules have changed and will enter the arena far better prepared. If Trump does not see out his term, American politics will have changed forever, and not in a good way.

People like to compare Trump with Erdoğan, but they probably know little about either beyond what they read in their social media bubbles or the hysterical mainstream media. The irony is that by trying so hard to depose Trump instead of understanding who elected him and why, America’s ruling classes and their useful idiots abroad are making it far more likely that his successor will indeed have much in common with his Turkish counterpart. If they had any sense they’d quit trying to get rid of Trump and let him complete his term, because if they don’t they will – as my mother used to say – really have something to cry about.

38 thoughts on “Americans are lucky to have Trump as President”