Yesterday I said the British police had hit rock bottom and started to drill. Last night they shipped in some dynamite: 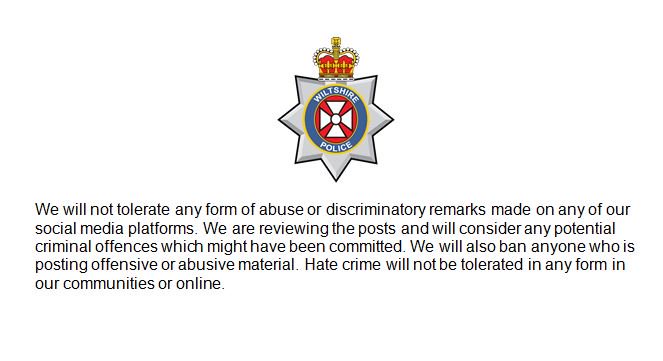 The Wiltshire Police sound like the NKVD without the charm and humour. And at least the Chekists had a few poets languishing in their cells who could have helped them write a decent tweet: the above reads like it was written by someone whose entire literary consumption consists of warning signs.

Wiltshire police wrote the tweet in response to the kicking they were getting on social media from their earlier stupidity, which by last night was circulating stateside. Rather than give someone a bollocking for tweeting shite and engaging in self-reflection, the police did what they always do: lash out in petulant fashion with threats. Having gotten quite used to bossing the population around on the street, tasering and arresting anyone who doesn’t immediately show deference to their authoritah, they thought they could do the same thing online. As they’re going to find out when America wakes up, they can’t.

Several people have pointed out that the Wiltshire police are making threats outwith their powers: they have no authority to ban people from posting offensive material, unless they’re referring to blocking them from their Twitter feed. The only thing that surprises me is that this surprises anyone. The police have become so used to making up the law as they go along, often deliberately misinforming citizens as to what the law is in order to get their way (particularly with regard to photographing things, and especially when the police are called in support of some jobsworth in a hi-viz vest), that they probably no longer know what the law is. The police don’t care either: their modus operandi is to make an arrest and subject the person to a lengthy, expensive, and damaging process in order to clear their name. If and when he does, he will be out of pocket but the policemen involved will get off without so much as a reprimand. The process is the punishment, the police know it, and they abuse it.

Personally, I think if it is proved that a policeman deliberately misled a member of the public into thinking he has broken the law when he hasn’t, the PC concerned should be given a written and final warning. If it happens again, he’s booted out and banned from policing for life. Otherwise we might as well replace our current lot with cheaper police from Nigeria.

If you talk to policemen on Twitter, their first line of defence is to say you don’t understand how things work, and ten of them pile in to say that the police don’t make the laws, they only enforce them. Their assumption is that you don’t know this. The point they miss is that much of the public don’t blame the police for enforcing shitty laws, but they detest the way they go about it with such obvious glee and pomposity. If the police adopted an attitude of “Sorry mate, but we have to do this…new laws, y’see” the public might think better of them. But they don’t, they fall over themselves to enforce these appalling laws – and boast about their powers online.

The second line of defence for policemen is to make you out as some sort of crank, way out of tune with the general public. They’ll all reiterate how much the public values them as per the latest polls, and most will talk about what a great job their colleagues are doing. Policemen seem to think their poor public image can be rectified by having policemen praise each other online. Others will say things like “the emergency services do a great job”, hoping the genuine appreciation people have for firemen and paramedics will rub off on hapless Plod. Eventually they’ll dismiss you as being a paranoid outlier and block you. One even said he was glad he was able to protect the public from “people like me”, as if this engineer with a blogging hobby was a danger to anyone. Seemingly not appreciating the police and showing signs of defiance makes you a threat in the eyes of Plod.

Personally I’m all for this sort of idiocy on Twitter. As I’ve said before, the sooner the public understand the nature of the British police and abandon the romantic Dixon of Dock Green image, the better. In the comments under my last piece, Schrodingers’s Dog says:

Clearly a major role of the British police seems to be the enforcement of a left wing political and social agenda. As such, the rest of us should be thinking in terms of non-cooperation with the them.

I can only agree with that, and I think that’s where we’re headed. Criminals and their families have famously refused to cooperate with the police, but so have the people who swim in the same waters. They figured out that the police are not on their side, never have been, and never will be: any mutual interests are coincidental and temporary, and in the long run cooperation simply isn’t worth it. It’s only a matter of time before ordinary people reach the same conclusion.

25 thoughts on “Wiltshire Police Dig In”