Last year I wrote about the parlous state of sport in Australia, including rugby union:

Australia is also going through a low point in Rugby Union, which I don’t think is a mere blip.  Following a strong showing in the 2015 RWC (where they avoided South Africa and rarely worried the Kiwis in the final), their Super XV franchises did spectacularly badly the following season

Were it not for the wildcard system that ensures the playoffs are not dominated by the Kiwis, the Brumbies – Australia’s best side – would have finished joint 7th on points and miles adrift of 5 of the 6 New Zealand sides.  The Brumbies got dumped out of the knockout stages in the first round, and that was the Australian effort over for 2016.

Things are even worse this year, and this is the table as it stands today: 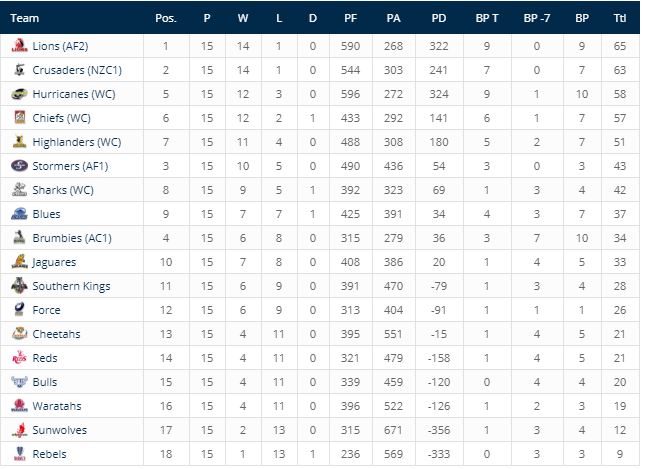 Once again the Brumbies are Australia’s best side, languishing ninth in the overall table standings, but thanks to the “conference” system they now enjoy a home quarter-final against the Hurricanes! Meanwhile, the Auckland Blues are eliminated. There has been some considerable grumbling about this on Twitter, particularly from South Africans.

The four best sides in the competition by a mile and a half are the Crusaders, Hurricanes, Chiefs, and Highlanders – all from New Zealand. The South African Lions finished top of the combined tablebecause they’re in a weak conference with only 3 other teams, whereas the Kiwis had to play proper opposition most weeks, i.e. each other. This season has seen the Kiwis see off most foreign opponents with ease, and usually only tasting defeat against one of their own teams (which makes the British & Irish Lions fighting them to a standstill all the more impressive). The conference system is supposedly designed to keep the competition interesting and all nations involved until the end, but what they mean is they don’t want four Kiwi teams contesting the finals every year with the Australians sulking on the sidelines. I have long suspected that much of the IRB’s efforts – including some decisions in matches, e.g. the penalty against Scotland in the last WC – are expended towards keeping Australia winning, thus ensuring interest in the sport Down Under. Australians are notoriously fickle when it comes to sport, and if their teams aren’t winning they’ll pretend they don’t exist (see their TV coverage of the Ashes when things aren’t going their way, for example). Australian rugby falling by the wayside will be a disaster for the international sport, which even now lacks top-tier sides that can make for proper international contests.

From what I am reading on Twitter, there are murmurings that the South Africans may leave the Southern Hemisphere setup and join the French Top 14 competition. This would makes sense for two reasons: the South African franchises are being stripped of talent by players leaving for the better money on offer in France, and it’s on a similar time zone (unlike NZ and Australia).

The Super Rugby organisers are trying to do something about this by reducing the number of teams and making the competition more sensible, but it might be too late. In a few years we might see the premier rugby competition in the Southern Hemisphere consist of five good NZ teams and two Australian ones.