The picture below is of a poster which appeared in Istanbul in the run-up to Christmas, and a Turkish friend has confirmed its authenticity after I saw it on Twitter.  The writing is to the effect of “We’re Muslims, we don’t want Christmas and New Year celebrations!” 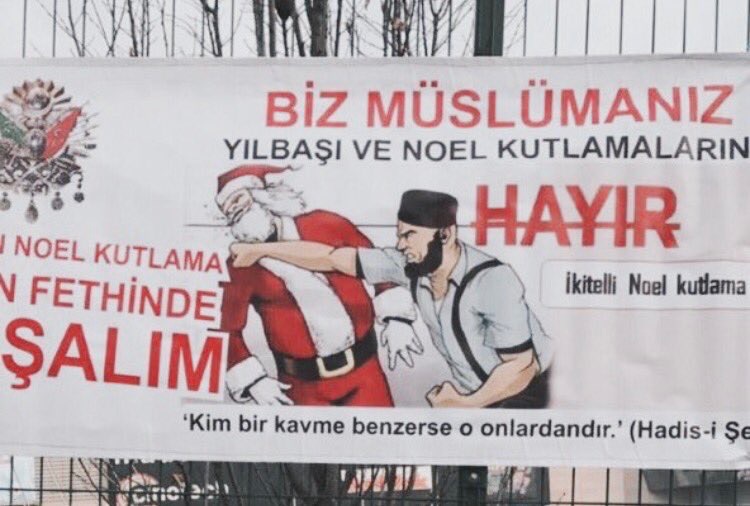 It is safe to say that such a poster would not have been tolerated by the Turkish authorities prior to Recep Erdoğan’s ascension to power and his subsequent efforts to move Turkey away from the secularism of Ataturk and towards some sort of Islamic theocracy.

On  New Year’s eve a gunman murdered 39 people in a nightclub in Istanbul that was popular with secular Turks and foreigners.  News is breaking that ISIS is claiming responsibility.  Following the murder of the Russian ambassador to Turkey a couple of weeks ago by a Turkish policeman, I said:

What must now be causing Erdoğan to break out in a cold sweat is whether by neutralising all threats from the secualrists in Turkey he has overlooked the threats posed by extremists, who are now seeing opportunities to make inroads into that country which didn’t exist before.

Erdoğan has shifted Turkey to a position where large posters promoting violent Islamist intolerance against secularists are permitted on the streets of Istanbul (and presumably other cities) because his political power is strongest with the nation at this point on the spectrum between secularism and religious fundamentalism.  However, in doing so he has severely weakened the institutions which protected Turkey from fundamentalist religious elements such that he might now be unable to stop any slide along the spectrum from the position of his choosing to one much worse.  In short, Erdoğan has allowed the extremist camel to stick its nose inside the Turkish tent.

According to the news reports, the perpetrator of the nightclub attack is still at large.  In my earlier post I speculated as to what degree Turkey’s security forces have been infiltrated by extremists like the one who shot the Russian ambassador:

It’s all very well him chucking secular journalists in jail and kicking professors out of universities, but this isn’t going to make Erdoğan any more secure if Turkey’s riot police has been infiltrated by ISIS.  And what about the army?  Who replaced all those secular officers that were purged?  Officers who were on board with Erdoğan’s programmes, presumably.  But were they screened for extremism?  I doubt it.

I wonder how many Turkish policemen are helping the nightclub gunman to evade capture?

7 thoughts on “Of Posters and Murders in Turkey”