Rex Tillerson, the businessman nominated by Donald Trump to be the next US secretary of state, was the long-time director of a US-Russian oil firm based in the tax haven of the Bahamas, leaked documents show.

Tillerson – the chief executive of ExxonMobil – became a director of the oil company’s Russian subsidiary, Exxon Neftegas, in 1998. His name – RW Tillerson – appears next to other officers who are based at Houston, Texas; Moscow; and Sakhalin, in Russia’s far east.

I’m not sure what the issue is here.  Presumably the dolts at The Guardian had never heard of ExxonNeftegas, unlike pretty much everyone else in the oil industry who pays attention, and thinks it is some sort of shady shell-company set up to launder Putin’s personal cash float, or something.  The reality is a lot less interesting: ExxonNeftegas is merely the consortium set up to operate the Sakhalin I project, as its website tells us:

Sakhalin-1 is comprised of Russian, Japanese, Indian and American participants and is operated by Exxon Neftegas Limited, a subsidiary of ExxonMobil — the world’s largest non-governmental oil and gas company.

Anyone who has spent time in Yuzhno-Sakhalinsk would have seen the ExxonNeftegas building on the corner of Prospekts Mira and Kommunistichesky, and they would have encountered lots of young Russians employed by the firm each of whom had a business card with the company name and Sakhalin-1 logo printed on it.  (They may also have encountered a Canadian with more air miles under her belt than Voyager 2.  Let’s see if she’s reading this.)  Secretive it is not.

Maybe The Guardian takes issue with the fact that the information regarding Tillerson’s directorship of ExxonNeftegas had to be leaked for them to find out.  And they would have a point, were ExxonMobil not silly enough to include such top-secret information on their corporate website: 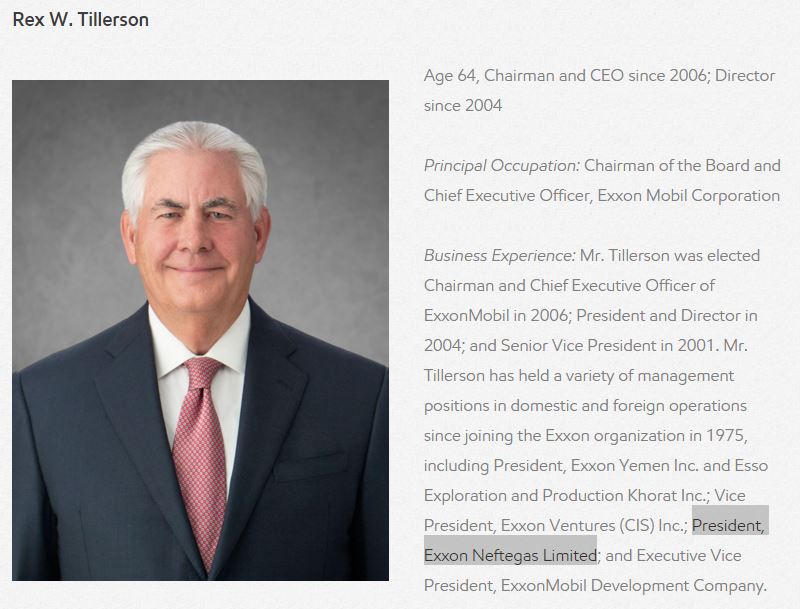 But as The Guardian tells us:

Though there is nothing untoward about this directorship, it has not been reported before and is likely to raise fresh questions over Tillerson’s relationship with Russia ahead of a potentially stormy confirmation hearing by the US senate foreign relations committee.

There is nothing untoward about this directorship, but as Guardian journalists didn’t know about it then it’s a scandal worthy of a newspaper column.

ExxonMobil’s use of offshore regimes – while legal – may also jar with Trump’s avowal to put “America first”.

Fair point, but it might be a bit of a stretch to complain that ExxonMobil isn’t insisting its Russian operations are headquartered in the United States.  The company’s registration in the Bahamas is probably new information to most: I knew about it because I have signed contracts with ExxonNeftegas Limited and their corporate address is stated in them (along with a stipulation that any arbitration will be heard in the courts of New York).  The incorporation in the Bahamas may seem odd, but it is not unusual.

ExxonNeftegas’ counterpart in that corner of Russia is Sakhalin Energy Investment Company (SEIC), which is the operator of the Sakhalin II project.  SEIC is registered in Bermuda, probably for much the same reasons ExxonNeftegas is incorporated in the Bahamas.  SEIC has been majority owned by Gazprom, the government-owned gas company, since 2007.  If there was anything untoward in these consortia being registered outside the Russian Federation on balmy island tax havens, the Russian government would likely have done something about SEIC by now given they have had control of the company for the past 9 years.  That they haven’t suggests there is nothing illegal or improper going on.  As The Guardian reports:

[ExxonMobil] said the oil firm had incorporated some of its affiliates in the Bahamas because of “simplicity and predictability”.

Indeed.  Only among Guardian readers is this a story.

3 thoughts on “Shock as World Learns Rex Tillerson is an Oil Company Executive!”