Further to my previous post, there is another grave mistake the Democrats and their supporters are making, one which has parallels in the UK.  Consider the article I linked to earlier:

Hillary supporters believe in a diverse America; one where religion or skin color or sexual orientation or place of birth aren’t liabilities or deficiencies or moral defects. Her campaign was one of inclusion and connection and interdependency. It was about building bridges and breaking ceilings. It was about going high.

Trump supporters believe in a very selective America; one that is largely white and straight and Christian, and the voting verified this.Donald Trump has never made any assertions otherwise. He ran a campaign of fear and exclusion and isolation—and that’s the vision of the world those who voted for him have endorsed.

More virtue-signalling, more condescension, more insults, more lack of awareness.  They are doubling-down on the very things that cost them the election.

For another example, look at this: 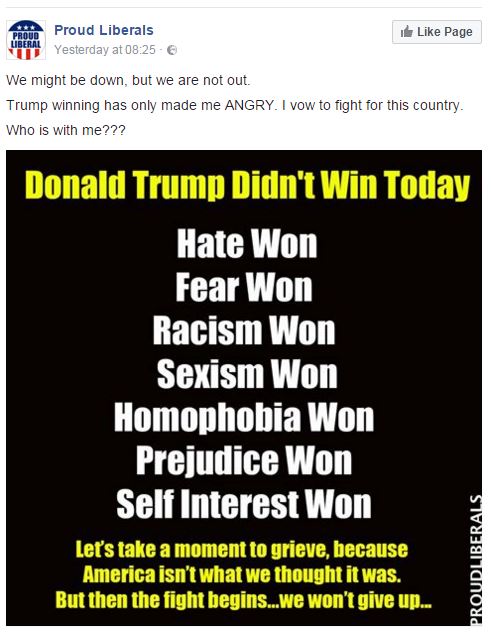 Note there is no attempt to understand the opposition, to reflect on why their labelling everyone with whom they disagreed as a racist, sexist, homophobe, etc. didn’t bring them the electoral success they were so sure of.  Instead they’re just repeating what they said throughout the campaign, only now from a losing position.

“The Democratic Party must go through a reckoning. Donald Trump tapped into the profound economic anxiety that so many people feel deeply in their lives. Progressives warned repeatedly that Republicans could outflank Democrats on trade, jobs, Wall Street, and corporate greed — and they did. This race should not have been so close, and Democrats will lose in the future — over and over — if they don’t go through a serious ideological shift and follow Elizabeth Warren’s lead — fighting against the rigged economy in a truly authentic and real way.”

As Tim says: “The way forward for the Democrats is more Elizabeth Warren?  Jeebus”

When Labour got trounced by the Conservatives in the 2015 UK General Election the immediate reaction of Labour and their supporters was twofold:

1) Repeat the insults they had flung at the opposition all the way through the campaign period, only louder and with more swearing.

2) Complain that the brilliance of their message “hadn’t been heard” and hence they ought to be more radically opposed to the winning side.

The result was that the lunatic fringe of the British Left hijacked the Labour movement and took the party way out into the long grass, convinced that their views were mainstream.  In doing so they have all but guaranteed continuous Conservative rule until the party is taken back from the headcases or a new opposition party formed.

The lunatic fringe of the American Left appear to be making the same mistake by thinking that their views are mainstream, and if the moderate Democrats are not careful they could find their party is also captured by hardcore elements – the Bernie Sanders mob, crazed college students, mental feminists, etc. – and find themselves elbowed out into the political wilderness indefinitely.  Of course, such warnings have been issued before in relation to both Republicans and Democrats, but it appears to have happened for real in the UK and the political landscapes on both sides of the Atlantic are shifting in ways we wouldn’t have thought possible just a few years ago.

Much as though I’d laugh if the Democrat party did go down this route, I’m not sure a Republican party facing no serious opposition would be a good thing for anyone.

8 thoughts on “Who will be the Democrats’ Corbyn?”