One of the most frustrating things about living in Russia between 2006 and 2010, and thus having somewhat of a clue about things over there, was getting into arguments with people outside Russia in which I found myself defending Vladimir Putin.  My views on Putin are fairly well explained on this blog: I thought he did a pretty decent job between 1999 and 2007, although the bar was set ludicrously low (which his why his actions in Chechnya and elsewhere get overlooked).  And I thought he should have stepped aside in 2008 and ridden off into the sunset rather than flipping to Prime Minister and back to President again four years later.  I’ve explained why here.  Since 2008 I think Putin has taken Russia in very much the wrong direction and continues to do so, and you couldn’t possibly count me as one of his supporters.

But nevertheless I found myself defending him, leading people to think I was some sort of shill, and this was infuriating.  Whatever Putin did or didn’t do, living standards for almost all Russians improved massively between the time he took office and 2008, and possibly beyond.  The wealth (if not necessarily the wages) of ordinary Russians increased several times over, allowing them firstly to buy a car, then renovate their apartments (starting with double glazing), then buy some half-decent clothes, then buy a non-Russian car, then go on foreign holidays, and in some cases buy a dacha or second apartment.  When I first went to Russia in 2004 I saw mainly Russian cars clogging up the roads in Moscow.  When I last went to Russia in 2012 Russian cars were very much in the minority in Saint Petersburg.  And nobody has lived in a Russian apartment block in the last ten or fifteen years without violently cursing the endless crashing and banging noises as yet another neighbour carries out a programme of remont on their property.  Albeit starting from a very low base, Putin’s initial term coincided with ordinary Russians becoming more prosperous than any time in the country’s history.  The wealth wasn’t just for the oligarchs.  I found myself having to make this point quite often to foreigners.

But more often I found myself defending Putin of the charge that he is a dictator, and I still do.  Nobody sensible denies that Putin crushes any potential opposition in its infancy, runs Russia like a personal fiefdom for he and his mates, and anybody who treads on his toes even slightly ends up in an icy prison cell or fleeing abroad with whatever cash they can carry in a suitcase.  He is authoritarian and has little respect for the democratic process and goes out of his way to subvert it, but this doesn’t make him a dictator.  The difference between him and the likes of Colonel Gaddafi, Saddam Hussein, and Fidel Castro is that there are genuine elections in Russia and for the large part they are free and fair.  Yes, there is a lot of meddling and manipulation going on, and opposition parties are roughed up and chucked in jail before they can even come up with a name for themselves, but nobody denies that even without all this Putin and Yedina Rossiya – the ruling party – would not win hands down.  Indeed, the biggest mystery to me was why Putin thought it worth gaining a reputation of being anti-democratic by fiddling elections to win 90% of the vote when free and fair elections would have seen him win 75%.  My guess is old habits learned at KGB school die hard, and it’s in the nature of these guys to crush all opposition, even if it is pathetically feeble.  It’s hard to tell exactly how much without a functioning media and free elections, but Putin is undoubtedly popular among a majority of Russians and he rules – however badly – by popular consent.  My fview has always been that this needs to be acknowledged, and the reasons why properly understood, in order to deal effectively with Putin and Russia, and dismissing him as a dictator in the same vein as Bashar al-Assad or the Kims in North Korea is simply wrong and unhelpful.  So I end up jumping into arguments to defend him, which I’d really rather not do.

“Why is he rambling on about this, and when is he going to get to the point?” I hear my readers ask.  I’m getting to it.

During the second of the US Presidential debates that took place last Sunday night, one of the moderators repeatedly asked Trump whether he had ever kissed a woman without permission.  Trump initially just talked over the question and ignored it but the moderator asked again and again whether Trump had kissed a woman without permission, and persisted until Trump said “No, I have not”.  Several viewers picked up on this, with the one I follow being Ben Shapiro: 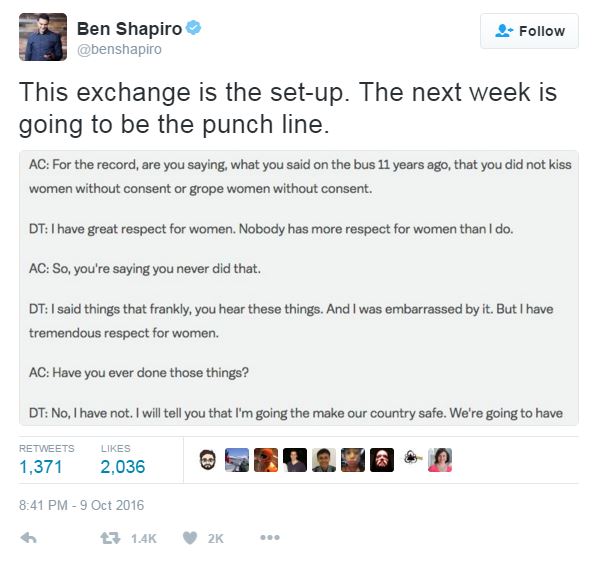 Ben Shapiro is no fan of Donald Trump (or of Hillary Clinton), but he – and others – could see that this was a deliberate set-up by the moderator to get Trump to deny something specific so that a media shit-storm would follow the next day when evidence miraculously emerges to the contrary.  And sure enough, that is exactly what has happened: the New York Times has led with a story about how Trump groped two women and now that’s all the media are talking about, including another allegation that he leered at a 10-year old girl.  Funny how quickly those intrepid reporters at the NYT managed to get these women on the phone and the story written a day or two after the debate, isn’t it?  It’s almost as if they had it prepared in advance.

Another Twitter user, Luke Thompson, gets it right I think (read from bottom to top): 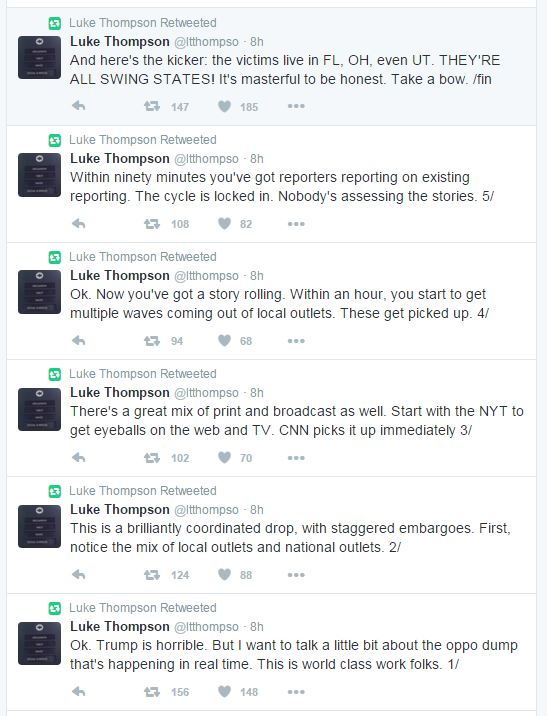 The second from top is the clincher: nobody is assessing the stories.  The whole point is to get an allegation out there and run it so many times that it becomes the established truth.  I make no excuses for Trump’s behaviour, and I am sure that some or most of it is true and he did engage in groping, kissing, and other stuff that some or most women might not have wanted.  He’s going to have to defend himself on that score.

What I object to is the blatant, coordinated mission by the media and whoever is encouraging them to set up a Presidential candidate in such a manner using a supposedly disinterested “moderator” in the debate as a key actor in the process.  It is an absolute disgrace, not so much for what they are doing but the brazenness with which they are doing it.  The establishment figures that are behind this – Democrats, the media, wet Republicans – clearly hold the population in such utter contempt that they think they can wheel out half a dozen allegations of assault – some of which supposedly took place 30 years ago –  at this stage in the campaign using such tactics and everyone will be fooled by it.

I think this is going to backfire badly.  As I said in a previous post, you don’t need to be a Trump supporter to be concerned about this, and I believe a goodly number of decent America are already reluctantly defending Trump and prepared to vote for him just to ensure this kind of condescending stitch-up by the political and media establishments doesn’t pay off.  A lot of Americans have realised that if they allow this sort of behaviour to go unpunished in the polls it will be deployed against any future, decent Republican candidate who threatens the cosy status quo the elites have built for themselves.

I think this is the first election in which social media is properly laying bare the corruption which lies at the heart of American Presidential elections.  Via Bayou Renaissance Man I came across this post at Conservative Tree House about Hillary’s polling figures.  Short version: the company which ran the poll is a paid-up member of the Clinton election campaign.  Whether this is true or not – and I have no reason to think it isn’t from what I have read – the fact that it is not only believable but wholly unsurprising that makes it so bad.  If a blogger with a couple of hours to spare can reveal such manipulation, it means the people behind it aren’t even trying to cover their tracks.  They assume the people are too stupid to notice, or if they do they are powerless to do anything about it.  The contempt is staggering.

Right from the start of the primaries for the party nominations this election campaign has seen no end of these sorts of shenanigans (remember the coin tosses?).  The Russians will have been following events with a keen interest, and now they have all the ammunition they need to defend themselves against charges that the ruling elites control the media and force them to do their bidding.  Comparisons between Russia and America are often silly, but it is going to be increasingly difficult after this election for the US to criticise Russia in regards of their treatment of the media and their own election irregularities.

I am sure millions of ordinary Americans are watching this with absolute horror, disgusted at the way their institutions are being corrupted in order to maintain the ruling elite’s grip on power.  Like me defending Putin when I feel it is necessary, I think there will be a lot of Americans who find themselves in the unenviable position of defending Trump when they’d really prefer that they didn’t have to.