I first visited the old mill near Campeaux mentioned in the previous post in August 2014, two years ago.  When I was there I took the opportunity to visit the nearby town of Saint-Lô, where I went to the cemetery and then spent twenty minutes or so locating the mausoleum of the Blanchet family.  Readers are entitled to ask why, and so I shall duly explain.

There is not much to see in Saint-Lô.  It was destroyed to the tune of 97% during the battle for its liberation in July 1944, causing one American solider to remark “We sure liberated the hell out of this place”.  It was rebuilt, as Wikipedia puts it, as follows:

The dominant style was a neo-regionalist functionalism which was dominated by concrete. Its dated and monotonous character was soon criticised.

And for this reason there is very little worth seeing in the town.  One thing of interest, however, is the monument to Major Thomas Howie, who was the commander of the 3rd Battalion, 116th Infantry Regiment, 29th Division after the D-Day landings.  As the story goes:

On the morning of July 17, Howie phoned Major General Charles Gerhardt, said “See you in St. Lo”, and issued orders for the attack. Shortly afterward, he was killed by shrapnel during a mortar attack. The next day, the 3d Battalion entered Saint-Lô, with Howie’s body on the hood of the lead jeep, at Gerhard’s request, so that Howie would be the first American to enter the town.

After the war, the town of Saint-Lô erected a monument to Howie, shown below.

However, Thomas Howie wasn’t the only US army major fighting around Saint-Lô on that day.

One of the most influential books I have read, at least insofar as it made an impact on me, is Colonel David Hackworth’s About Face.  During his development as an officer, Hackworth was greatly inspired by the wartime exploits and soldiering abilities of one Glover S. Johns, Jr who would lead the vanguard of American troops sent into West Berlin by John F. Kennedy in 1961 as a show of strength as the wall was going up.  In his book, Hackworth refers to Johns’ own book, The Clay Pigeons of St. Lô, an account of his day-to-day experiences as the commander of the 1st Battalion, 115th Infantry Regiment, 29th Division over a period of one month leading up to the liberation of Saint-Lô.  Hackworth praised the book’s extremely well written descriptions of each military operation and action the battalion undertook, and believed the book should be required reading for all infantry officers.  Having never forgotten its name, eventually I ordered myself a copy and read it for myself.  As a story of the Battle of Saint-Lô it isn’t much good, but as a highly readable account of what life was like for an American soldier fighting in the hedgerows of Normandy and the day-to-day role of a battalion commander in a major war, it is probably the best out there.  In other words, it’s for military nerds but not for the casual reader.  One thing is for sure though, it gives you an idea of the horrendous casualty rate the American infantry suffered while up against a German army that even on the back foot was still highly capable.

Towards the end of the book, as Major Johns’ unit is entering Saint-Lô, he found the place he had chosen for his command post was too dangerous and he was losing men at an unacceptable rate, and so he sent one of his subordinates off to find a better one.  Quoting from The Clay Pigeons of St. Lô:

Half and hour later the S1 came up to lead him back to his new home in St. Lo, which turned out to be an imposing mausoleum in the cemetery!  On the facade were two words Johns would always remember, “Famille Blanchet.”  He balked at the idea of moving in with the Blanchets; but when he looked inside he decided it was the best command post he would ever have.

The walls were of polished marble blocks 18 inches thick, with a heavy door set back under a small but equally solid portico.  There were no windows to be blown in, so that only a direct hit on the front steps by something big would have any chance of hurting anyone inside.  It would take a bomb to damage the building itself.

Inside, on the ground floor, was a small chapel.  Though the room was only about 10 feet by 15 feet in size, it would hold everyone who had legitimate business there.  Furthermore, there was plenty of room outside for the runners to dig foxholes so there would no longer be any excuse for bunching up.  Under the chapel was a crypt, reached by a narrow flight of stairs leading down from one side.

The vault was largely occupied by an enormous stone sarcophagus.  The thing sloped upward towards the entrance, the high end having a flat surface on top which was at an awkward height but would do better than nothing for maps.  A small stone tablelike affair was set into the wall opposite that end, with barely room for one straight chair.  The crypt was cramped, but it would do.

Space around the sarcophagus itself was limited.  A man could walk by without touching, or lie down full length and be comfortable, but two men could never pass one another.

The Germans had used the vault too.  Empty wine bottles lay about, and a half loaf of hard, dry bread took up space on the little table.

Remembering this passage from the book, I decided to find this mausoleum for myself given I was in the area, and take a look at this obscure little piece of military history.  When I did, I looked inside and poked my head down the stairs into the crypt and found it exactly as Major Glover S. Johns had described it having been there 70 years before. 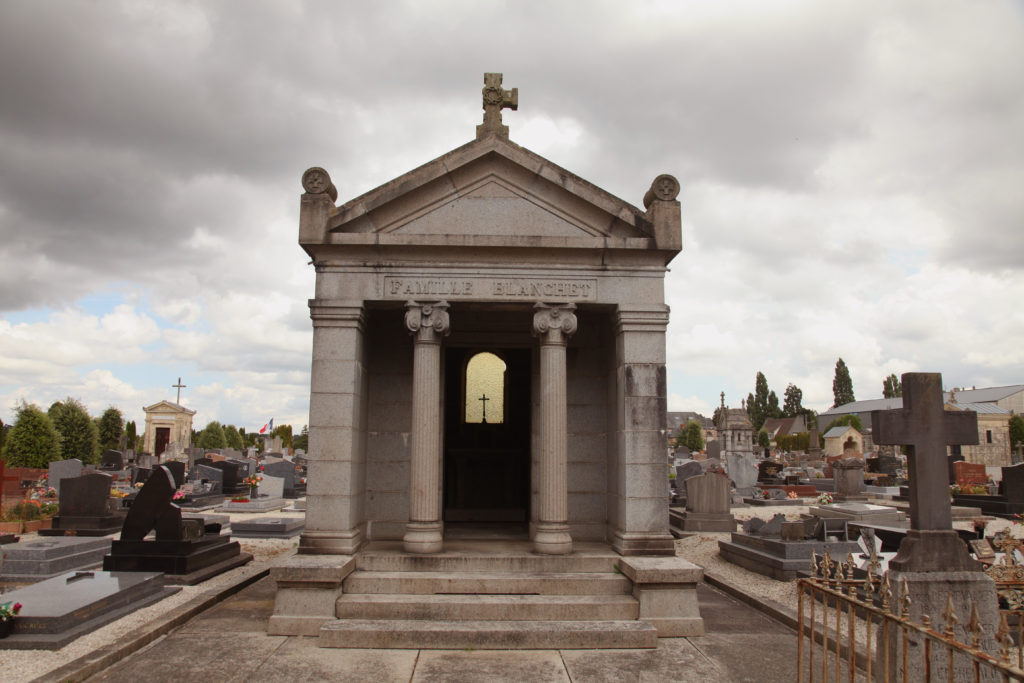 The broken cross on the top bears witness to the mausoleum’s past, as does the shrapnel marks on the exterior walls.  But a small scrap of paper in cellophane off to the side marking it out as a waypoint on some sort of military tour was the only indication that anybody else knew about this tomb’s role in the liberation of Saint-Lô and the battle for Normandy.