I’m not sure if St. Petersburg can really be called part of the Baltic region, but this is where I started my trip anyway.  There were a couple of reasons for it: firstly, I had a duty to visit my mother-in-law; secondly, I wanted to catch up with some friends who I had not seen in several years, a period I considered to be too long.  So off I went, for what was my first trip to Russia since I went back to Sakhalin in October 2012.  I once again used Real Russia for my visa, and they were once again outstandingly efficient.

The trip didn’t get off to the best start when I arrived in Pulkovo airport to discover Air France hadn’t transferred my bag from the Paris-Lagos flight.  They’d had around 4 hours to do it, and my bag was marked priority (being a platinum member these days), but alas it wasn’t on the plane and nobody knew where it was.  More worryingly, the reference number on my baggage tag was incomplete and I had the sinking feeling the bag had never left Lagos.  If that was the case, I was pretty screwed because all my warm clothes were in that bag, including my hat, scarf, and down jacket.  And there was no way I was going to buy 2 weeks’ worth of clothes in St. Petersburg, it would double the cost of the whole trip.  Reassuringly, there were some others who had also not received their bags, giving me hope that there was a pile of them identified and sitting at Charles de Gaulle.  I spent the best part of an hour filling out forms and hoping it would be on tomorrow’s flight, before I went to meet my mother-in-law and stepped outside into a Russian winter evening wearing nothing more than a light jumper.

Later that evening I received a text message saying my bag had been found and it would be on the next day’s flight, and so I spent the first 24 hours lying about my wife’s childhood home, unable to go outside, and considerably grumpy.  At around 6pm we went to the airport and there it was, and once I’d filled out the inevitable forms and handed around bits of paper, I gratefully took charge of it. I lost no time in putting my jacket on.

I went straight from the airport to Vassilevsky Island, one of the main islands which make up St. Petersburg, and the home of my friends Aigul and Allard, who I visited in Kazan way back in 2005, and last saw on a brief trip to Moscow in December 2007.  Since then they have doubled in number, producing between them a little girl who eyed me with much suspicion before largely ignoring me, and a slightly larger boy who overcame his initial shyness to either use me as a climbing frame or whack me one every few minutes.  I’m quite used to this, most of my friends have children these days, and this tends to be the standard approach of most of them towards me: ignore, or full frontal attack.  They were both very sweet.

We didn’t do anything of great excitement in St. Petersburg – as the parents of small children will readily understand – but we did go out to the park to let the kids run around and tire themselves out, and that involved me having to stand about in the snow for the first time in almost two years.  I wasn’t really prepared for it, down jacket or no.  Three years living in the tropics has eradicated the cold resistance I developed in Sakhalin, and a general theme of this whole trip was that, most of the time, I was pretty bloody cold.  Nevertheless, I went along to the park on two occasions to watch the kids clamber about on playground equipment in minus something and two feet of snow. 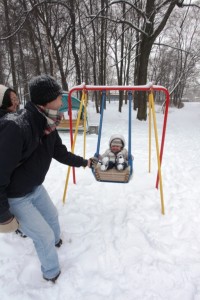 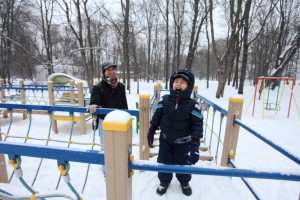 I guess options for entertaining small children in winter in St. Petersburg are limited, especially as it only got light at about 11am and was dark by 4pm.  The park was fairly busy with other parents and children at any rate.

It had been over 4 years since I was last in St. Petersburg, and the place had changed noticeably.  It is undeniable that Russia has prospered over the past decade (although still falling way short of its potential, IMO) and this was reflected in the streets of St. Petersburg.  The first thing I noticed on the way from the airport was the lack of Russian cars on the roads.  When I first came to Russia in 2004, they made up about 70-80% of all cars.  Now you have to wait for twenty or so to pass before you’d see one, everyone else is driving foreign machines.  And I can’t say I blame them.  And when I first came to St. Petersburg in October 2005, the main streets were pretty well done up but the side streets looked decrepit.  But not any more.  Nowadays, there are shops, bars, and other businesses all down the smaller streets as well, and almost all of them are well lit.  Sadly for certain visitors, but I suspect not for the residents, St. Petersburg – like Moscow – is becoming less unique (can you qualify “unique”?  Dearieme?) and more like any other European city with the same shops and bars you can find anywhere.  And although I miss the rougher St. Petersburg (and Moscow) of old, I don’t think this is a bad thing.

One thing hadn’t changed though: petty Russian bureaucracy.  Having been out of Russia for a while I made a schoolboy error on my return, and neglected to bring my passport when attempting to buy a train ticket.  The lady in the tiny kiosk, located in the corner of a ticket hall the size of an aircraft hangar near Kazan cathedral, told me it just wasn’t possible to buy a ticket without my passport.  And sure enough it wasn’t.  This reminder stood in stark contrast to what I would find elsewhere in the Baltic states, as subsequent posts will show.  So I had to make a second trip before I could by a ticket on the high-speed Allegro train to Helsinki, which came in at a reasonable 86 Euros or thereabouts.

Saturday night came and it was time to meet up with my friend Timur, who I first met in 2004 when he was working behind a bar in Abu Dhabi and, apparently, I wouldn’t leave him alone and insisted he tell me all about Russia.  I think I was a bit of a mental case back then, at least insofar as Russia was concerned.  I’d met him twice in St. Petersburg since, once in 2005 and again in 2008, and on each occasion we had got pretty drunk.  This time we headed first for an English pub called the Ring O’ Bells which had a reasonable atmosphere, fairly cheap beer, and a good three piece band which played all sorts of stuff.  We stayed here until pretty late, drinking first beer and then I think I switched to whisky, but it might have been vodka.  We then made our way to a nearby club (or at least, I think it was nearby) which was lively enough, and we stayed there drinking more and more until at some point we decided to go to the sister club, with the same name, on Vassilevsky Island.

We arrived by taxi, and the first thing the doorman said was that it was full, there was no room inside, but if we slipped him 1,000 roubles we could enter.  We were miles from anywhere and I was too drunk to stand about arguing, so I coughed up and we went inside…to find the place a quarter full.  And this is one of the worst things about Russia, which makes it more like Africa than Europe, and ultimately makes it a lot worse off than it should be: the propensity for its citizens to act like complete f*ckers and lie quicker than they can say hello, thinking themselves clever in the process.  I remember my first trip to Moscow when the taxi driver dropped me off he said with a smirk that he had no change for 1,000 roubles for an 850 rouble fare, knowing full well I didn’t speak any Russian.  So I had no choice but to waive the change, even though I knew damned well that no Russian taxi driver would be short of 150 rouble change.  Had that happened a few years later I’d have laughed in his face.

Now before all the Russian patriots leap in and say that scam artists operate in the UK, let me concede that they do, but not at the customer interface of service industries and nowhere near to the extent they do in Russia (although I’ll also concede that British doormen are violent thugs, and worse than their Russian counterparts).  Like Nigerians, way too many Russians think it clever and almost something to be admired if you can diddle somebody out of some cash by simply lying or being a complete scumbag.  And it’s one of the reasons why, as I allude to in this post, Russians as a whole are not afforded the respect they think they deserve and much of the world takes them as seriously as an African basket-case.  I really don’t give a stuff about the 1,000 roubles, and I suppose I shouldn’t be slipping doormen cash to let us in anyway (the alternative was to go home), but this sort of blatant dishonesty and general corruption makes Russia a much worse place.  By contrast, I saw none of this anywhere else on my trip.

In any case, we hung out at the club for an hour or two before it got somewhere between 4 and 5am and we both thought it would be a good idea to be getting home.  It was a nice night, and not at all ruined by my being fleeced on the door of the last club (it was the principle that annoyed me, and I only remembered the next day), and it was good to see Timur again.  I got home by walking some unknown distance down some straight roads and somehow stumbled across the gate leading to where I was staying.  I think I may have had a fight with a lamppost somewhere on the way, but I swear he started it.

And that was St. Petersburg.  Not the most exciting trip, but it was very good to see my friends and family again, and that was the main purpose of the visit.  The next day I would go to Finland, and start exploring.