I’m now back in Annecy, my return flights from the US via Heathrow having passed without so much as a minute’s delay. I finally managed to get to sleep around 3:30am last night, having spent the previous afternoon desperate to go to bed.

Other than New York in 2016 I’d not been to the US in years, and had forgotten how big it was. When my brother said he lived in Miami I assumed he actually lived in Miami, not a town called Weston 40 minutes away by car. The Russian I was meeting was staying in Pembroke Pines, which when I looked on Google maps appeared to be just next door to Weston, possibly within walking distance. It turned out it was a 20 minute drive down a 5-lane highway. When you visit the US you need to seriously recalibrate distances in your mind, especially if you live in a medieval town in the French Alps.

Miami wasn’t what I expected. For a start, we didn’t really go there. We spent some time on Hollywood beach, which was really nice, but that isn’t Miami. Miami itself seems to be a collection of high-rise office blocks and the Miami you see on TV is on a huge sandbar called Miami Beach. That consists of a rather ordinary grid of concrete streets filled with cafes, restaurants, and shops which I am told turns pretty wild at night, alongside a beach which is much like any other in Florida. We spent a few hours there overheating and getting lost before visiting the Vizcaya museum and gardens. Built around the time of WWI, this is what passes for an ancient monument in Miami. The other thing about American cities is there is often no city centre, or at least one you can wander around in. Outside of the North East they seem to be a collection of buildings and if you want a particular one – be it a restaurant, office, or shop – you drive to it, park outside, and go in. The only place you can park the car and wander around is inside a strip mall. This is convenient, but doesn’t make it easy when you’re tasked with entertaining a Russian for an evening, especially if she’s the one driving.

As planned, I rented a car and started driving north on my way to Pensacola. American hire cars don’t come with satnavs so I had to use Google Maps on my phone. I’d never used this before and it worked perfectly, but because I’d first used the phone in Nigeria the default voice was Nigerian English and it turned out to be harder to change than you’d expect. So for 20 hours worth of driving all my directions were delivered in a heavy Lagos accent. Once again the sheer size of America became apparent with instructions such as “Merge onto I95 and continue straight for the next 272 miles”. I drove from Fort Lauderdale airport north on I95 and stopped the night somewhere near Cape Canaveral after 3 hours of driving. The next morning I drove due north to Jacksonville then turned 90 degrees left and drove due west on I10 for 5 hours. The 700 mile drive from Fort Lauderdale to Pensacola involves a single, solitary left hand turn. Little wonder Americans think autonomous cars are feasible. The Florida panhandle is dull in the extreme – mile after mile of forests of tall, thin trees – on a dead straight road. Fortunately the experience of driving on American roads (in an underpowered Nissan) was new enough to keep things interesting. I am amazed by what Americans are willing to tow along the highways at speed. I passed pickup trucks doing 70mph in the middle lane towing giant boats behind them. I passed at least three accidents where more than 4 cars had piled into the back of one another like a concertina. I don’t think I’ve seen more than one of them the whole time I’ve been in France. Either American brakes are rubbish, they don’t understand stopping distances, or they spend a lot of time not paying attention.

I had a good time in Pensacola with my friend “Leisure Suit” Larry, who is quite a character. We met in Kuwait in 2004 and got on like a house on fire, despite him being 25 years my senior. As a teenager in the sixties, he’d joined the US army as a paratrooper “in order to raise hell”, serving in Vietnam, Okinawa, and the Dominican Republic. Now retired, Larry was an old-school maintenance man, and had worked in almost all the US states, and visited them all. In addition, he was working in Iran when the Revolution happened, Syria when Reagan slapped sanctions on the country, Basra when the Iranians bombarded it and Algeria when the US bombed Libya back in 1986. Diplomats soon learned that if Larry turned up to work in their country, the regime’s days were numbered. He’d turned up in Venezuela to be a plant manager only to later discover the chap who was supposed to be doing the job had been kidnapped and was being held for ransom in the jungle. His boast was he’d never been around at the start of any project: he only got called in when it was in the shit and all the money had gone. In Pensacola I stayed with he and his wife, to whom he’d been married for 53 years. That’s some effort.

We spent a morning at the nearby museum of naval aviation, Pensacola being the home of the US Navy’s air arm and the Blue Angels display team. This was impressive, filled with just about every aircraft that’s ever been used by the USN and models of each class of aircraft carrier. Here’s a pic of an 8 year old boy in the cockpit of a Phantom, which was surprisingly comfortable. 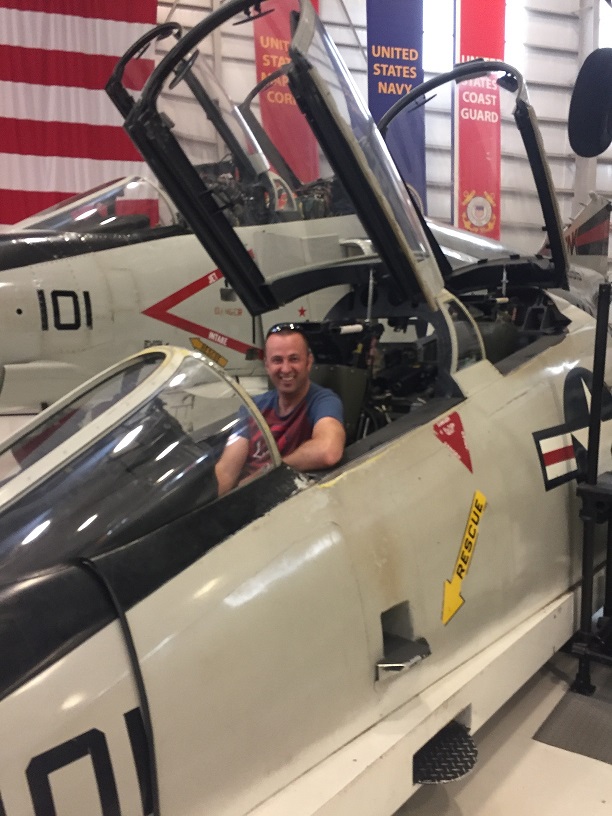 I was also surprised by how big the F14 Tomcat is: it’s not a small plane.

That afternoon we met up with one of Larry’s sons, a former US Army Ranger, on Pensacola beach and had a swim. Entering the Mexican Gulf is like taking a warm bath. The weather up there is a lot better than in south Florida: less humid and without the interminable thunderstorms which wreck the plans of tourists every afternoon in the summer months. In the evening we went to a extraordinarily popular Irish bar which was about as Irish as I am. The steak was good, though. Before I left Pensacola for the long drive back down south, Larry and I got a picture together. 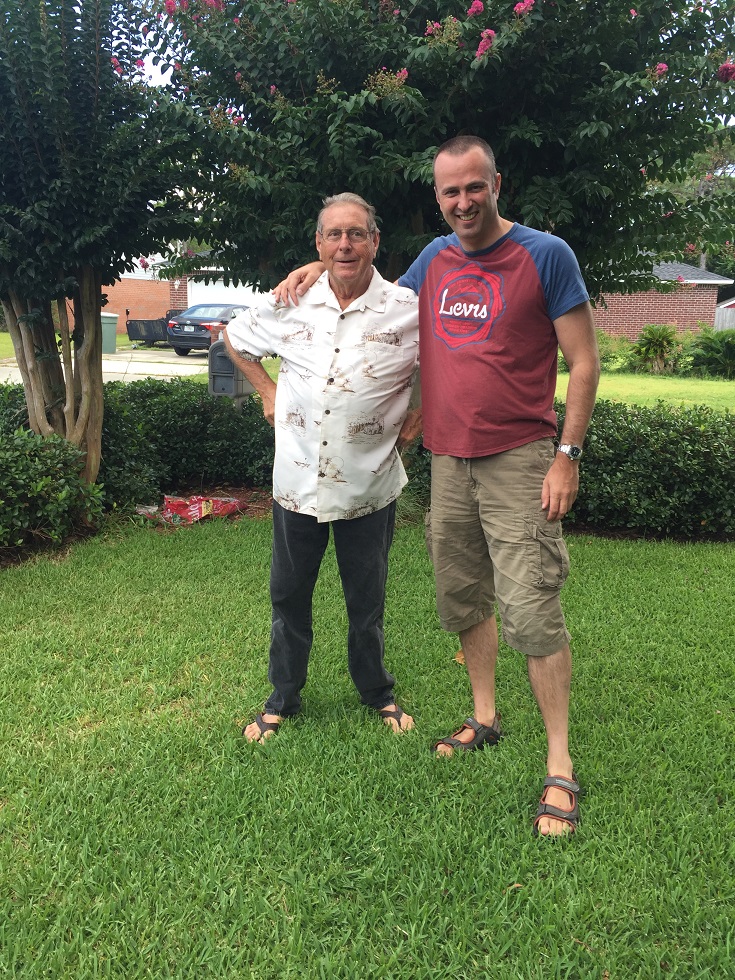 Fifteen years is a long time, but in many ways not much had changed. I always meant to go and see old Larry again and finally I did. It was well worth the trip.

25 thoughts on “The Sunshine State”