I spent the weekend in Paris and got down into some kulcher, as the kidz call it. On Saturday night I went to a show called Kiss & Cry in a small theatre somewhere around the Strasbourg-St. Denis metro. When I sat down I saw eight or nine models of various scenes in miniature – a house, a beach, a railway – several people standing around all in black, some very high-end video cameras on booms and a giant screen hanging above everything. I guessed right away they’d act out scenes with the models, film them, and project it live on the big screen, and this is basically what they did for an hour and fifteen minutes. The two principle actors used their hands and fingers instead of their bodies in wonderfully choreographed movements against a miniature background of considerable complexity. The effect worked very well. A team of about 10 people ran from one “set” to another, filming, mixing, inserting sounds, and creating all sorts of special effects in real time, including floods, blizzards, sandstorms, reverse-gravity, and deaths. For the audience, the most interesting aspect of the show was to watch the technicians at work on the miniature sets and see how it appears simultaneously on the big screen. In terms of technical skill, coordination, and discipline it was highly impressive and showed what can be achieved by simple models, decent cameras, and a lof of imagination.

On Sunday I went to an exhibition of modern art by the Argentine Tomás Saraceno in the Palais de Tokyo. A sign near the entrance let visitors know what they were getting into up-front: 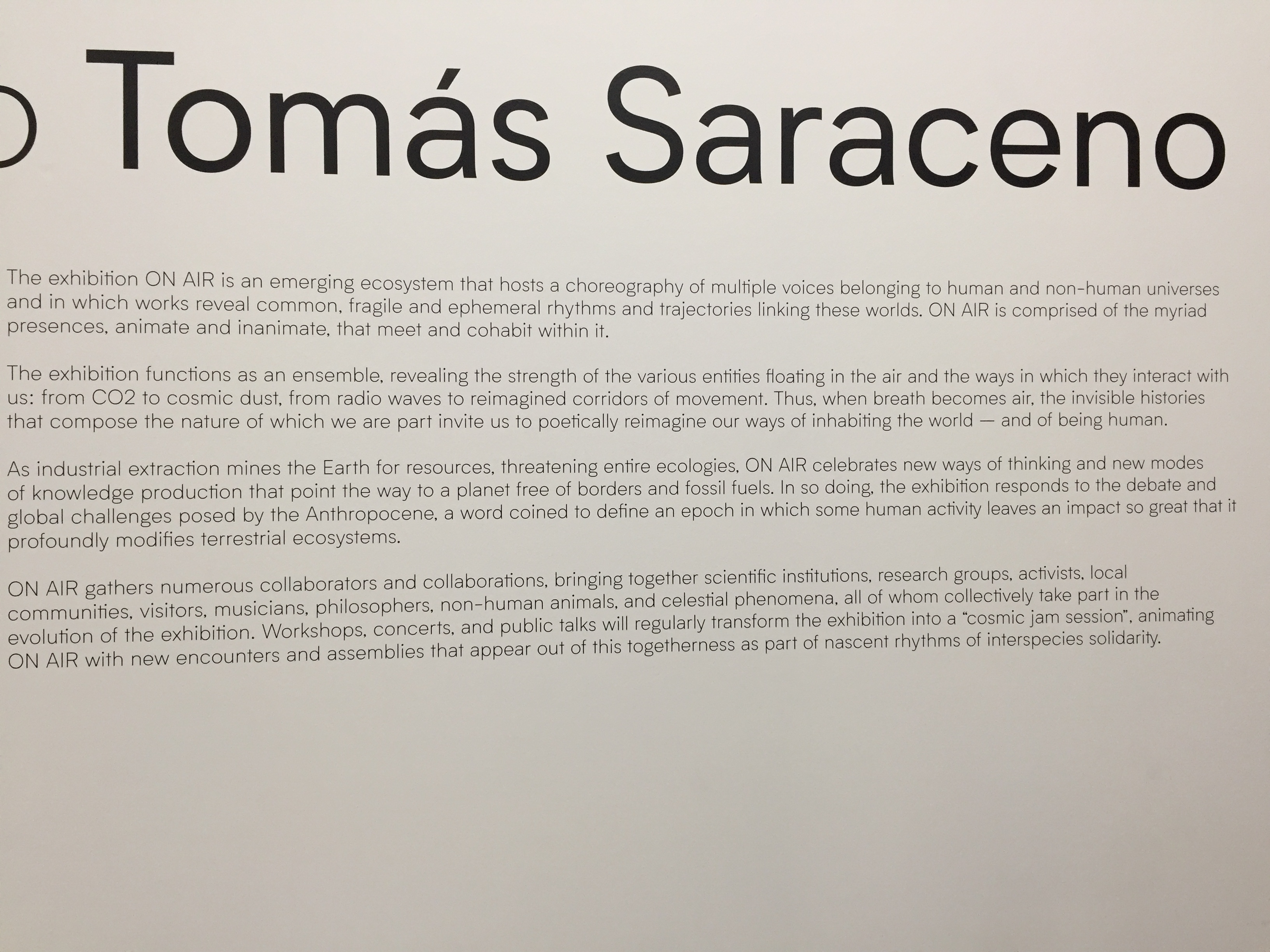 “A planet free of borders and fossil fuels”, eh? Why how original. Because if not from the creations of edgy artistes, where else would we hear debates on environmentalism and open borders? “New ways of thinking”, indeed.

The first exhibit was basically a bunch of cobwebs which, although impressive and expressing undeniable aesthetic beauty, left me wondering why it was the artist and not the spider whose name is on the exhibition: 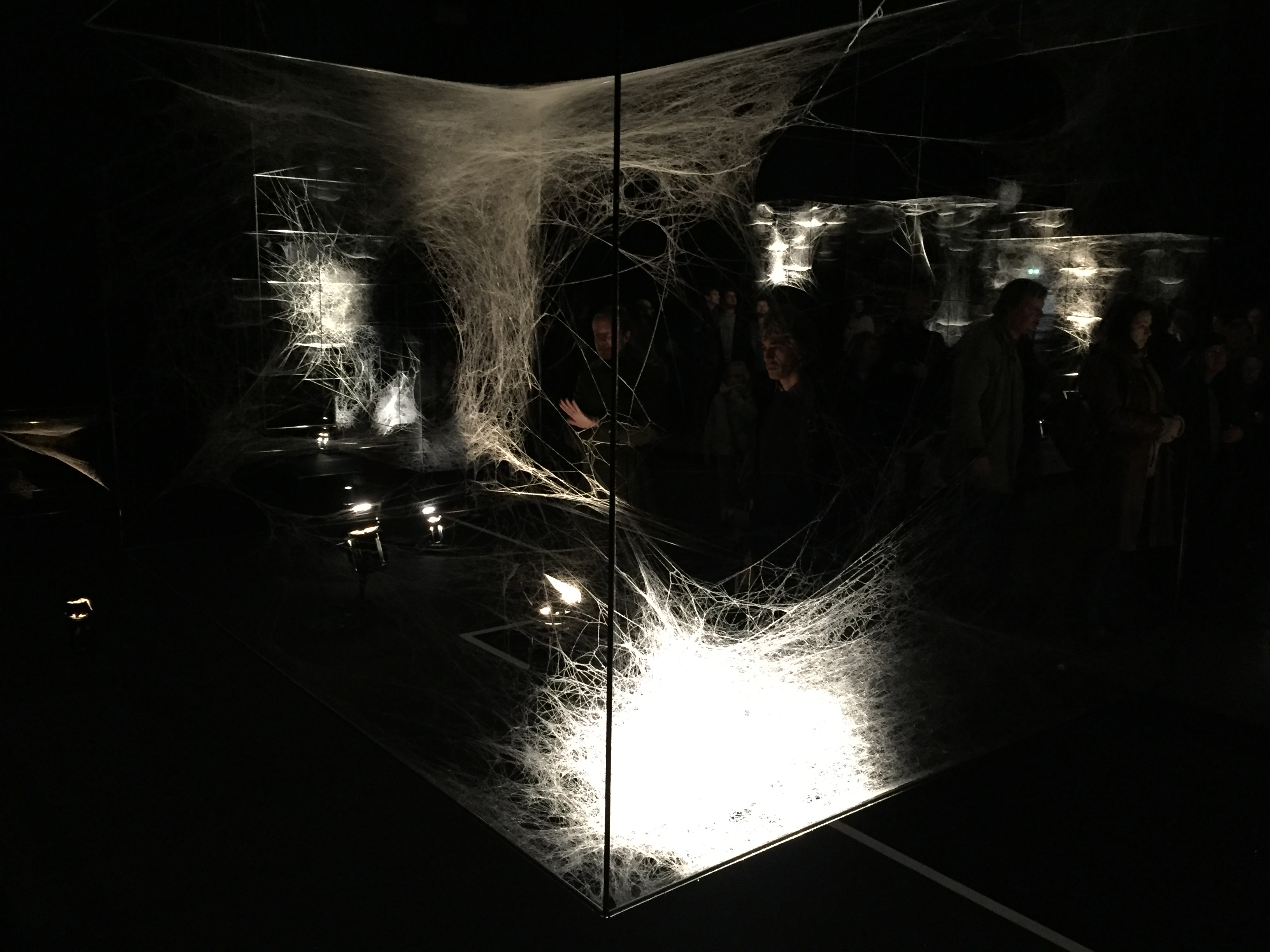 I spent most of the time looking for an actual spider, and eventually I saw one: it was huge. Sadly, it didn’t leap from its web and sink deadly poisonous fangs into the neck of an annoying child. Now that would have been art. Note also the exhibition is in pitch darkness, as was most of it. This might be my inner Philistine speaking here, but I’m of  the opinion that if your visual masterpieces are best seen in the dark, they’re probably not very good. Much of the exhibition concerned spiders and lots of woolly guff about cosmic particles which I don’t think the artist really understood. One room showed a video of a diving bell spider shot in ill-focused black and white, which made me think I’d be better off simply watching Animal Planet. Or perhaps it was the appallingly crap footage which made it art.

A bit further along the artist’s exhibits started rambling on about thermodynamics, which he didn’t seem to understand much of either. Certainly, there was no mention of steam tables. The best he came up with in relation to the subject was an acknowledgement of the fact that certain particles move upwards through the atmosphere “independently of fossil fuels”. Who knew? To illustrate this he presented a picture of the earth with various particles moving about, a bit like those .gifs you see on Twitter which map plane flights or marine traffic in real time. Only the .gifs are generally more interesting. I got the impression this chap latches himself onto a scientific subject in order to lend his work gravitas, but doesn’t bother to learn the discipline in question. Like Laurie Penny calling herself a nerd, I think a lot of artists pretend they are involved in science and  engineering in order to give the impression they are not empty-headed lightweights who would last about three minutes in a lecture on fluid mechanics. For example, one piece introduced the subject of space elevator – an interesting enough subject for a visual artist to cover – but this was little more than a premise for another sermon from the pulpit of environmentalism. Apparently any such device must be made available to all species, not just humans. How the blue whales will manage is anyone’s guess. Anyway, his depiction of the concept was six helium balloons in the dark. Another exhibit was a room full of string which the artist called Algorithms, perhaps in the hope he’ll be offered a job in Google.

Next we wandered into a room where a bunch of helium-filled balloons with marker pens hanging off them drew random patterns on the floor as they moved in the air. The blurb beside the exhibit talked in lofty terms of natural motion and forces beyond human consciousness (although not the artist’s, obviously) but I noticed the air currents in this exhibition hall were driven solely by a big f*ck-off industrial-sized HVAC unit hanging off the ceiling while guzzling fossil fuels. If it weren’t for this, his stupid balloons wouldn’t have moved and it would have been too cold for anyone to visit them.

The balloons set the scene for more woolly guff about “aerocenes”. Now I don’t know what they are, but it appears they’re against capitalism and fossil fuels and are worried about climate change. So your typically dim lefty, then. Have a read for yourselves, or not. 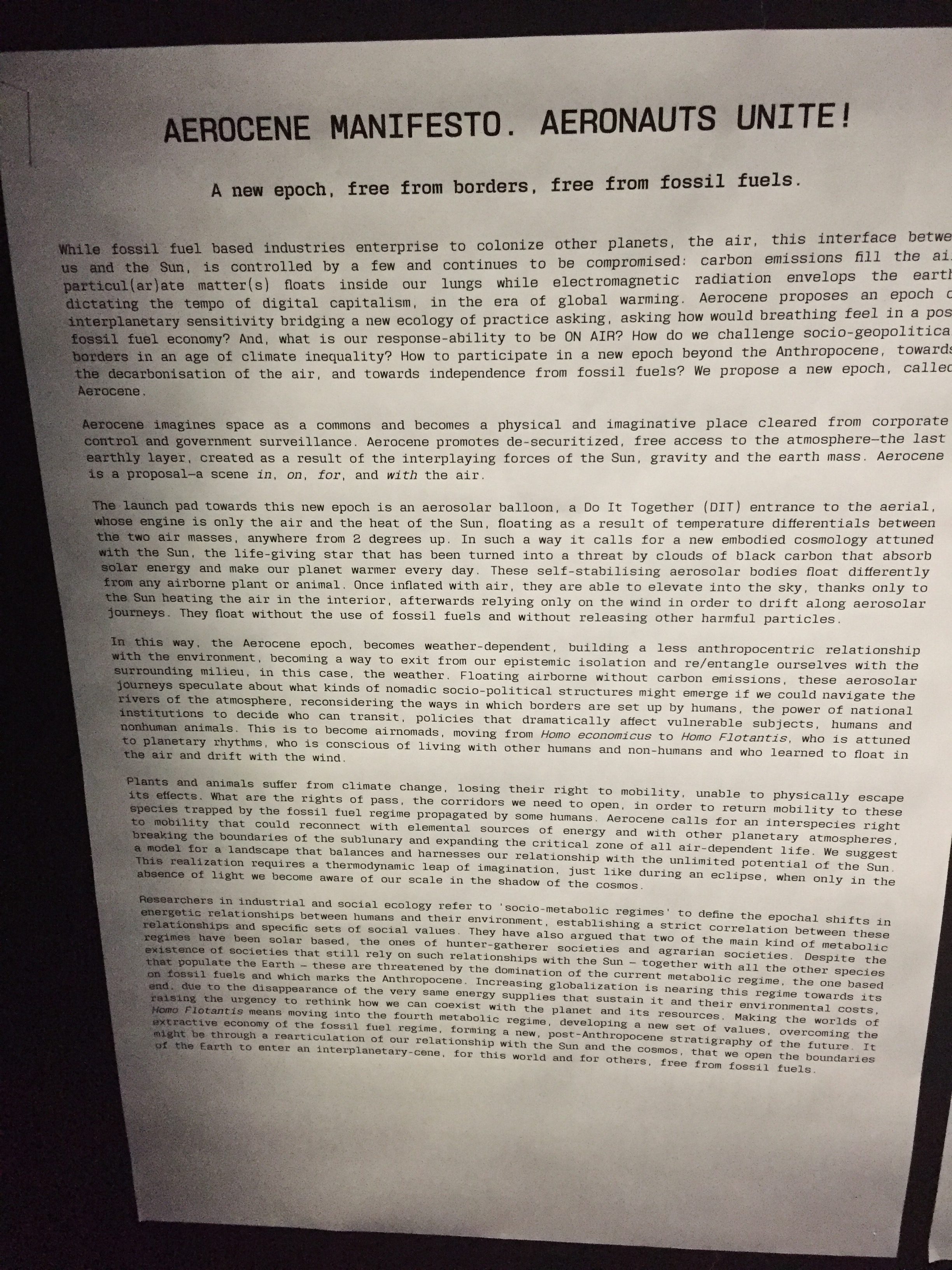 Finally we saw the artist had enlisted some volunteers to help him build a  giant balloon made of plastic bags from various countries – including Palestine in case anyone doubted his intersectional wokeness. The idea was it would fill with warm air, ascend, and blow around a bit. The way the artist described what most schoolboys learn from Ladybird books would have you thinking he’d just cracked cold fusion, but I suppose the average lefty who turns up to modern art exhibitions is sufficiently awed. In a room laughably described as a workshop I saw this picture on the wall: 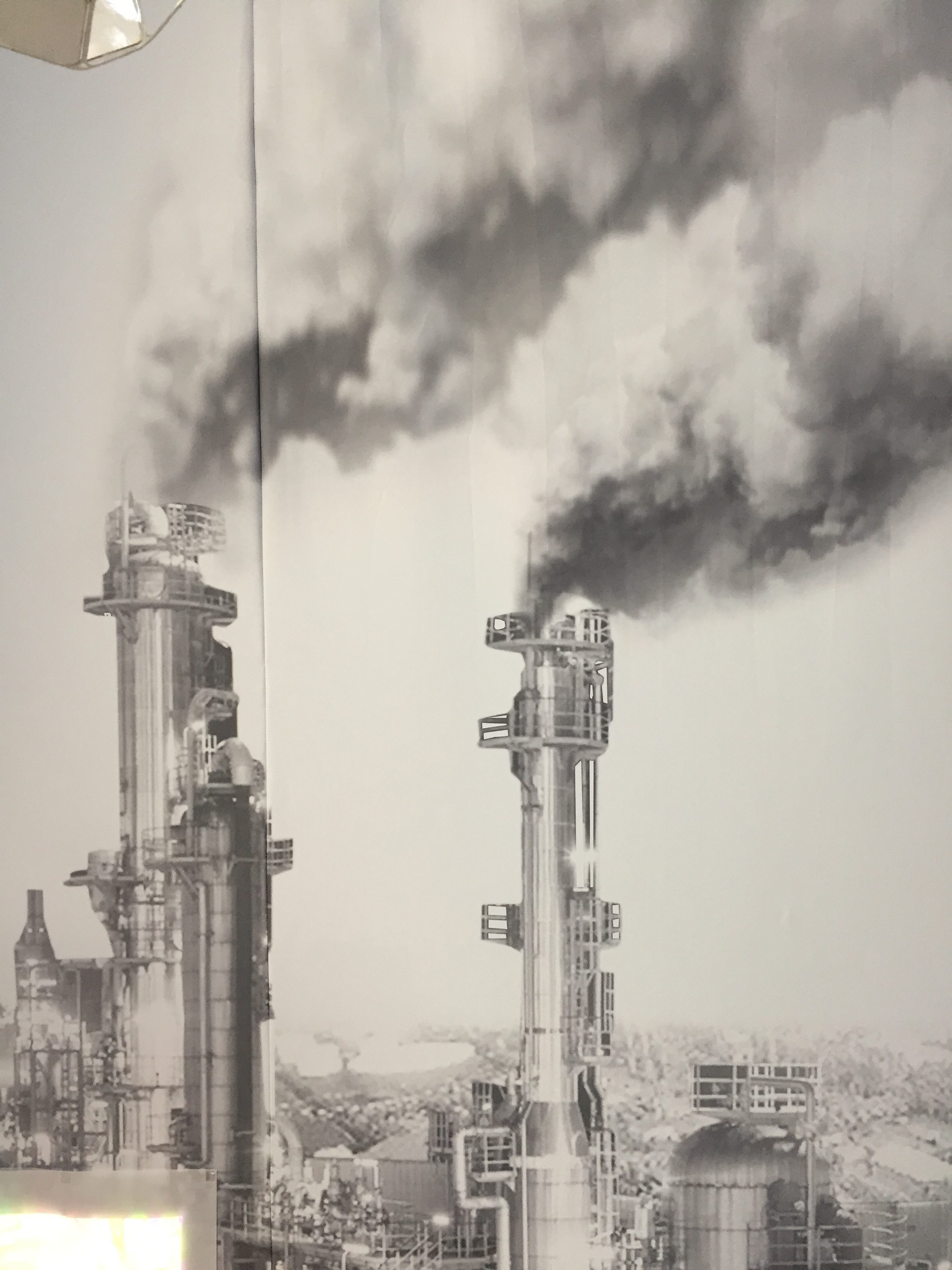 What this shows is distillation columns in a refinery or chemical plant. What it does not show is chimneys. However, in order to make a refinery look more polluting, the artist has photoshopped it to look as though smoke is coming out the top of them. Now unless the plant is undergoing a serious industrial accident, this is impossible. One of the reasons I’m not in a full-blown panic over environmental degradation is those who claim to care the most about it often resort to outright lying over its extent. On the other wall of the workshop was a chalkboard inviting people to leave messages. I drew a methane and an ethane molecule and left, secure in the knowledge that a thousand visitors would pass by before anyone would get the joke. I suppose the irony would be lost on the artist himself, who can while away the hours pontificating over loosely-grasped scientific concepts thanks only to the excess wealth produced by a society built on fossil fuels and capitalism.

So if you’re in Paris next weekend and fancy a spot of culture in between the teargassing of rioters in yellow vests, I can recommend Kiss & Cry at the La Scala theatre. I can’t recommend Tomás Saraceno’s rubbish at the Palais de Tokyo.