After receiving several impatient emails from readers, I finally got around to watching the first episode of Louis Theroux’s Altered States BBC series, which was about polyamorists. It’s a very interesting hour of television, particularly if you knew nothing about polyamory before. But if you’ve been following my blog for a while you’d find it interesting in a different way thanks to all the small details which indicate what’s going on behind the facade.

Theroux moves between three groups of polyamorists, all living in or around Portland, Oregan, which appears to be a city full of complete weirdos – and commentator Howard Roark (readers are invited to ask him to explain himself in the comments). I’ll structure this post differently from the program, and describe each group in succession.

The first is made up of two men and two women, all in their fifties. Jerry is an IT analyst who is married to Heidi, a therapist. Between them they have a daughter who looks about 9. Twelve years ago they “opened up their marriage” because Heidi felt depressed and, to put it bluntly, shagged some fella she knew back in college. So we’re not 5 minutes in and already we learn the underlying reason for this polyamorous lifestyle is mental health problems on the part of the woman. For the past 5 years, Heidi has been with a fellow called Joe, who is big, bald, and bearded. He comes over to Jerry and Heidi’s house once a week and sleeps downstairs in a bed with Heidi while Jerry stays upstairs. The daughter seems fine with all of this – for now, anyway.

Later on we meet Joe’s wife Gretchen, who doesn’t have purple hair but she has dyed the front few strands lilac. She’s fifty years old, and has two kids with Joe, both under ten. When Theroux turns up at her house, Heidi and Joe are in bed together. Heidi is wearing a t-shirt with a reference to polyamory, and you see a lot of objects advertising their lifestyles throughout the program. Theroux has a serious discussion with Gretchen in the kitchen which is revealing. Gretchen seems to resent that she is responsible for her husband’s happiness, and think it’s his issue to deal with. Perhaps unintentionally, she gives the viewer the impression that the only form of happiness she recognises is that derived from sex. She doesn’t like sleeping with Joe and is happy to let someone else “take a turn at the wheel”, and we soon learn why. Gretchen has been going to sex clubs since she was 20 and living in San Francisco, and is still into bisexual orgies with strangers. It quickly becomes obvious that Gretchen doesn’t give a damn, Joe loves Heidi because she gives him attention, and Jerry looks as though he’s about to kill himself. Jerry is not seeing anyone else and isn’t ever likely to: he’s just the poor schmuck who agreed to polyamory because he didn’t want to lose the only women he’s ever loved (one suspects). Heidi sees how much it’s hurting him but is too damned selfish to either set him loose or quit polyamory. He cuts a pitiful figure throughout, but he and his wife deny he’s unhappy even when Theroux presses them. Jerry’s responses sound as though he’s been brainwashed by a cult, and I suppose he has.

Theroux asks Gretchen whether the polyamorous arrangement she has with her husband is not simply “slow divorce”. She denies it, but admits there are problems; like other polyamorists I’ve met, she’s adamant they have nothing to do with their chosen lifestyle. Both Gretchen and Heidi distance themselves from the idea that they have any responsibility towards their respective husbands’ happiness, and that, coupled with shots of them sitting under blankets on the sofa smooching one another, make this group of fifty-somethings come across as incredibly immature.

The second set are a bunch of modern-day hippies who live in a commune consisting of a few houses and a vegetable patch. The main house is stuffed full of books and paraphernalia, almost of all of which has something to do with sex. It’s apparent that sex and polyamory defines them more than anything else, and if those are stripped away they’re unbearably dull and probably not very bright. We are introduced to Mattias, a weedy-looking hipster and his partner AJ, who looks as though she’s just been rescued from a cult. AJ is pregnant with Mattias’ kid (that’s what we’re told, anyway). With them is Joelle, who rents (or owns) the gaff, and first approached AJ for some lovin’ but got passed onto Mattias instead. One gets the impression this bunch aren’t too fussy who they’re with – male or female – provided it’s somebody. Joelle has 4 partners, but she “doesn’t like to use such hierachal terms in her poly-dynamics”. Well, me neither. It turns out AJ was married for ten years in a polyamorous marriage, which is surprising because she looks about thirty. With one eye on the character in my book, I’m half tempted to wonder if she too needed a US residency visa aged 21. Less surprising is the revelation that her husband left her for someone who wanted a monogamous relationship, which made her feel betrayed. Again like my character, it hasn’t occurred to her that polyamorous men might not make the best husbands.

Later on we find out AJ has met someone else, another weedy hipster and software developer called Q. We are told they met at – wait for it – a class she was teaching on how to use sex toys. I swear I’m not making this up. I didn’t even know there were classes on how to use sex toys, but apparently they’re delivered in Portland by pregnant women. Maybe that’s what keeps Mr Roark sticking around? When interviewed, they speak as if they’re on a higher spiritual plane, as if promiscuity has gifted them insight unattainable by lesser, monogamous beings. But I reckon the pretentious language is simply sophistry to avoid admitting they’re hurting each other. Theroux interviews Mattius and asks how he feels about another man shagging the mother of his unborn child and he rambles for a minute or two before admitting that yes, it’s pretty f*****g hard. Like the first group they seem impossibly childish, and matters aren’t helped when they attend a semi-naked costume party and then a soft-porn orgy attended by the sort of fat, ageing, tattooed, ghouls you see in pictures from Burning Man. One of the things I liked about watching this program was how so many of the threads I’d written about on this blog wove neatly together. The physical resemblence of this second group with some of the polyamorist/Burning Man lot I encountered was striking. In the epilogue we learn AJ has given birth to Mattius’ child but “they have decided not to assign the baby a gender”. That meaty slap you can hear as the credits roll is my palm hitting my forehead. 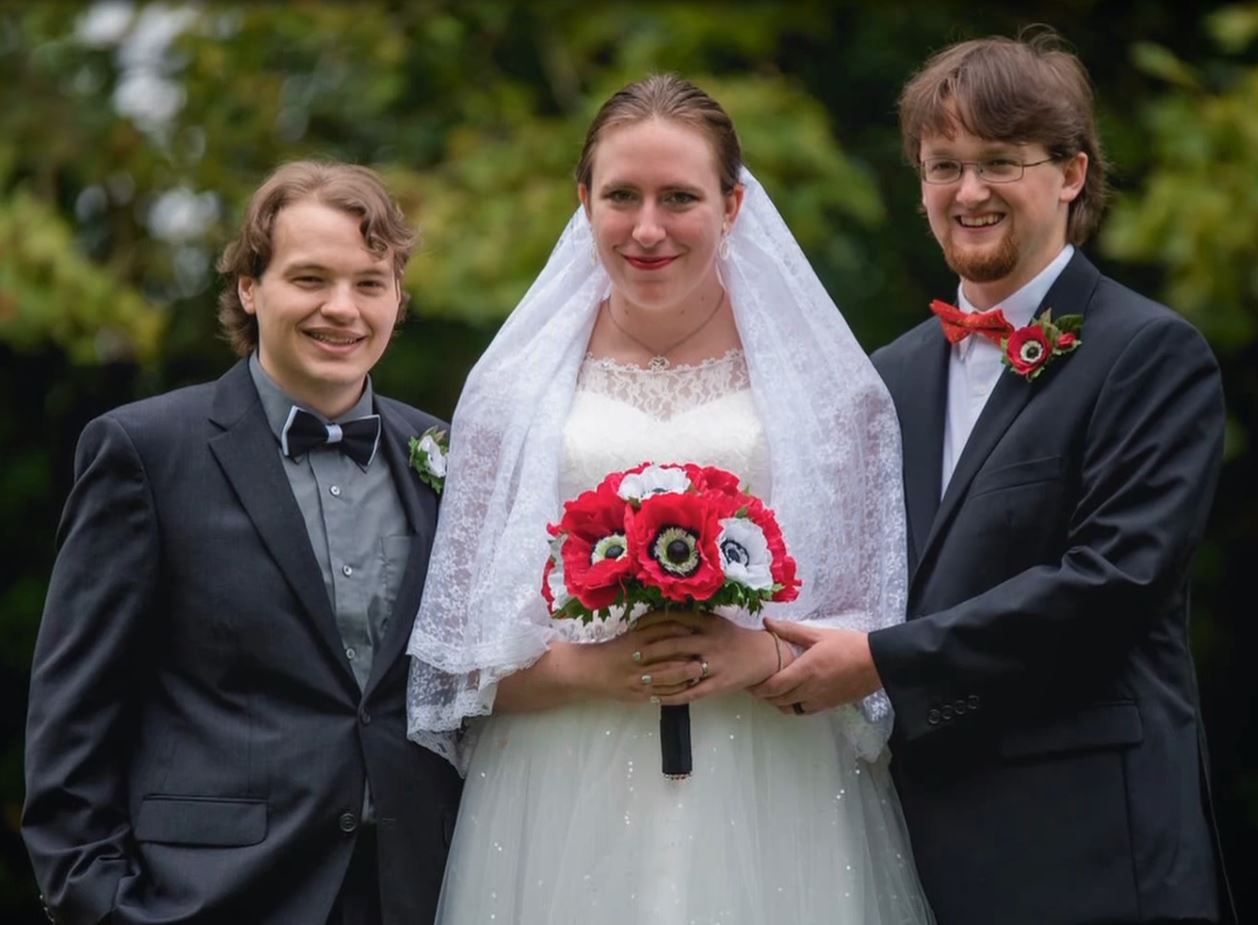 Their relationship started as a threesome, but now Nick and Bob appear to take it in turns with Amanda after finding there were some, ahem, sexual incompatibilities. They all still sleep in the same bed, however. In the beginning they seemed to be fairly happy, but as the program went on it was revealed that Amanda is on medication for depression which she’s had since her teens, when she engaged in self-harm. Both the boys mumbled that they’d prefer to be “enough” for Amanda, but each accepts they never will be. When Theroux remarks that Amanda seems lucky to have a double dose of love and support to help her deal with whatever monsters lurk in her past, it is hard not to conclude it’s attention she craves. She obviously has deeper underlying needs, and whether these can be met over the long term via a threeway relationship with a couple of man-children is doubtful.

In summary, the episode confirmed something I already knew but polyamorists go to great lengths to deny: they are simply not normal. Now I don’t care what polyamorists do, but the idea that these are ordinary, well-adjusted people who simply choose another relationship arrangement is not borne out by the evidence . As I’m fond of saying, for many this is less a lifestyle choice than a coping mechanism, and despite protestations from polyamorists, a lot of them seem to end up hurt or making their existing condition worse. My point is, should you ever encounter a polyamorist on a dating site you should assume they are very, very different from normal people regardless of what they say. And if they used to be polyamorous, they owe you a long and detailed explanation right up front. Even then, you should probably just walk away.