On Saturday, while trying to get on the A41 on my way to a seminar in Geneva, I ran into this:

One protester has died and more than 200 were injured as more than a quarter of a million people took to the streets of France, angry at rising fuel prices.

The female protester who died was struck after a driver surrounded by demonstrators panicked and accelerated.

The “yellow vests”, so-called after the high-visibility jackets they are required to carry in their cars, blocked motorways and roundabouts.

They accuse President Emmanuel Macron of abandoning “the little people”.

I was pretty annoyed, especially when one of them told me I had to move my car to the side of the road to let the bus behind me past, which was carrying children. I was tempted to suggest that, if kids languishing in buses are a concern, maybe they shouldn’t be blocking the f*cking road. They then handed me this: 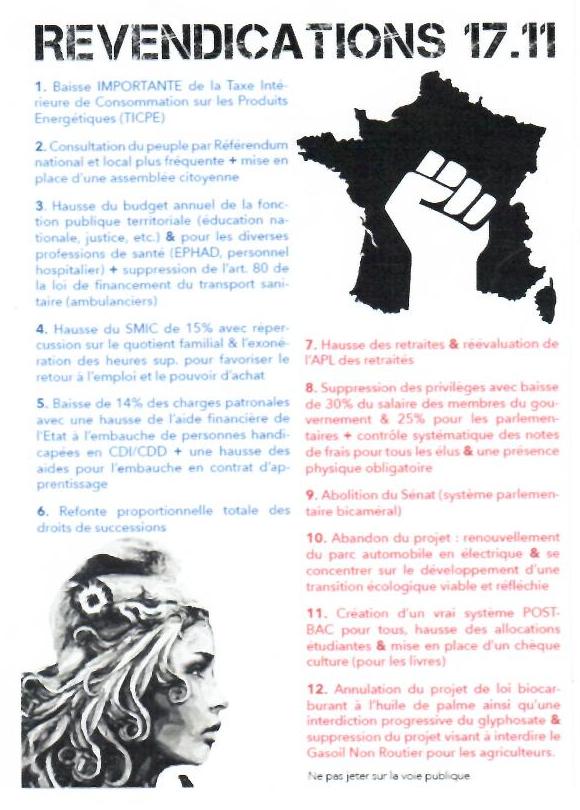 The protesters were mostly aged between forty and fifty, rather too old to be subscribing to anarcho-communist ideologies which have no chance of success at the ballot box. But when I got home and read the BBC article, I thought they may have had a point:

World oil prices did rise before falling back again but the Macron government raised its hydrocarbon tax this year by 7.6 cents per litre on diesel and 3.9 cents on petrol, as part of a campaign for cleaner cars and fuel.

The decision to impose a further increase of 6.5 cents on diesel and 2.9 cents on petrol on 1 January 2019 was seen as the final straw.

Diesel has always been cheaper than petrol in France, in part because French companies were early pioneers in diesel engine technology and the refineries were geared to meet the subsequent demand. But a decade or so back politicians across Europe decided CO2 emissions were the greatest danger mankind had ever faced and encouraged everyone to switch to diesel cars, which get a better mileage per gallon. So everyone did, only now the politicians are saying diesel is bad and have whacked up the tax, leaving millions of people facing rising fuel bills and with cars that in many cases will be near-worthless. An increase of 14.1 cents per litre in two years on a fuel the government encouraged people to adopt is extortion; no wonder people came out in protest.

Speaking on Wednesday, the president blamed world oil prices for three-quarters of the price rise. He also said more tax on fossil fuels was needed to fund renewable energy investments.

So why not just borrow the money if it’s such a great investment? After all, aren’t we forever being told that renewable energy is now so cost effective it doesn’t need subsidies? In any case, why should motorists be taxed to pay for renewable energy generation? Why not charge the customers directly?

So we have a government invoking an idiotic fad to punish people for following an earlier idiotic fad, which nobody in power has taken any responsibility for pushing. At the same time we have a blatant cash-grab in order to fund white-elephant projects which make the government look good when it struts around on the world stage with other kleptocrats. Little wonder Macron is the most detested French president in living memory.

Nearly three-quarters of respondents to a poll by the Elabe institute backed the Yellow Vests and 70% wanted the government to reverse the fuel tax hikes.

More than half of French people who voted for Mr Macron support the protests, Elabe’s Vincent Thibault told AFP.

Annoyed though I was at being delayed on Saturday morning, I’m rather glad I’m in France and people are making a noise. Most other places, the population would just eat it up.

“The expectations and discontent over spending power are fairly broad, it’s not just something that concerns rural France or the lower classes,” he said.

Indeed. How many of those supporting lunatic environmental policies live in cities, smugly tell everyone they don’t own a car, and have no idea how the country is fed and the lights kept on? Once again, the wealthy, metropolitan middle classes are making life miserable for everyone else.