Back when I was a subscriber to The Economist in the early ’00s, I always assumed their main opinion columns – Bagehot for the UK, Charlemagne for Europe, and Lexington for the US – were written by seasoned veterans who’d seen life from the parapet of an interesting and varied career. Whether or not that was ever the case, nowadays they seem to be written by hipsters who look as though they’ve never been anywhere without 4G: 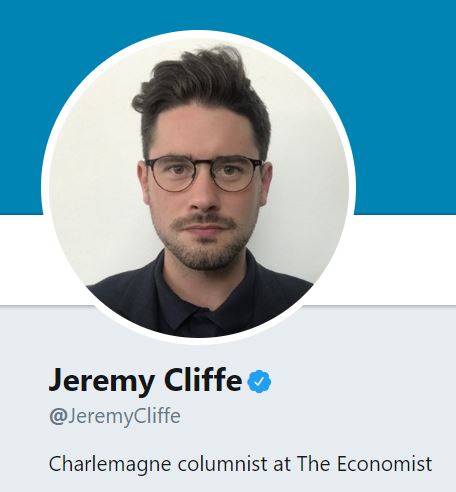 Certainly, a failure to venture beyond the trendy areas of Berlin would explain headlines such as this, written in April this year:

Germany is becoming more open and diverse. It could be a model for the West. Our cover this week pic.twitter.com/NN1NAeBnZX

Amusingly, one particular Twitter user has started a series juxtaposing this headline with stories which portray Germany’s embrace of diversity in a rather more realistic light, e.g.

Unsurprisingly, Mr Cliffe is an Oxbridge graduate and the only job he’s held outside of political journalism in his 8-year career is that of researcher for Chukka Umunna. I suspect this is typical throughout the mainstream media. There’s a reason I let my Economist subscription lapse over a decade ago; who in their right mind would pay to read this stuff?