The incomparable Steve Sailer brings us news from Melbourne:

According to the Australian Establishment, Melbourne has two African gangs problems: the African gangs of street criminals themselves, and, far worse, the Australians who have noticed and even talked about this new problem that the politicians have imported for them to endure.

How can Australia be a democracy when rifts are turned into election issues? The essence of democracy is that elections shouldn’t decide anything.

I understand a good portion of those African gangs are Sudanese, whose presence in the city I heard about during the first week of my arrival. I was in the gym at the astoundingly expensive and very average Novotel watching the news, and a story came up about how a bunch of policemen in the Melbourne suburb of Sunshine had been distributing racist stubby (drinks) holders. They then showed a picture of one of  the offending items: 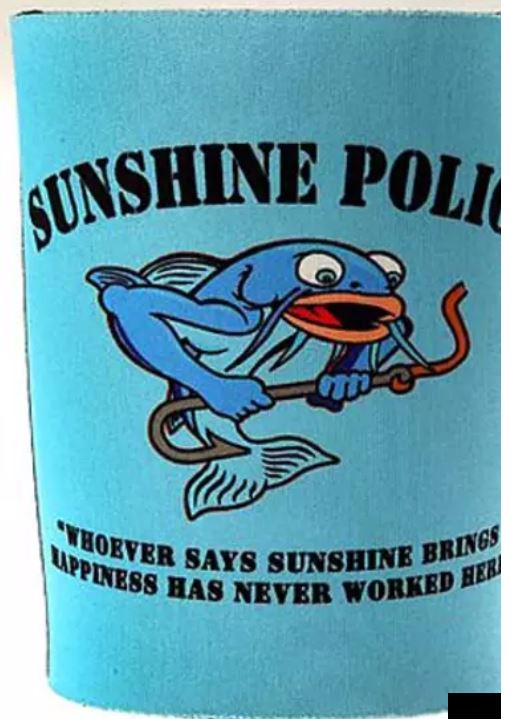 At which point I stopped the treadmill and said, “Eh?” Apparently, the above image was so racially aggravating to local Sudanese that three police officers were eventually sacked, because:

“Mudfish” is a type of fish and is a common food in many African countries. It is used by some people as derogatory slang for Africans.

Is that cartoon fish with human arms and hands unmistakably a mudfish? Judging by the photos, mudfish don’t even have barbels; it looks more like a catfish to me. And a Google search of “mudfish Africans” brings up several pages of how to catch one but not a single item which might indicate who these “some people” using it as derogatory term might be.

At the time I assumed this would be laughed out of the police complaints office, but oh how naive I was! Now bear in mind I’d spent the previous 10 years living in Kuwait, Dubai, Russia, Thailand and Nigeria where political correctness of this sort simply doesn’t exist. Certainly, in none of those countries is the local police going to find themselves in trouble over complaints made by foreigners, let alone refugees complaining about drinks coolers. I didn’t realise it at the time, but this was my first real exposure to how utterly craven the ruling classes in the west had become. Take this statement:

Chief Commissioner Ken Lay said the police force would not tolerate racist behaviour in any form.

“There is large numbers in the African community that were enormously disturbed by what has happened,” he said. “It sent a very bad message to the broader community that police were not tolerant.

You’ll not tolerate racist behaviour in any form, but you’ll invent it where there is none. Now the Sudanese would have learned from this. They tested the water and found they could get policemen fired in their new home simply by making the most silly of complaints, and now – five years later – they’re running riot around Melbourne confident that the ruling classes who took their side previously will continue to support them. The rot set in a long time ago, and nothing is going to change until those in charge are run out of town on a rail and left to die of thirst in the desert.