There are several arguments which could be made to contest the Economist Intelligent Unit’s ranking of the world’s most liveable cities, especially concerning how they measure “culture” which, rather implausibly, put Adelaide in the top 10 a few years back. Yet despite this open goal, one Chibundu Onuzo writing in The Guardian misses the target completely:

A few months ago, I stepped out one morning and saw a coil of animal poo on the doorstep. My mother and I spent a long time trying to figure out what sort of animal had done the deed. We decided, in the end, that a fox was the culprit. But it could also have been a racist.

Racists can can shit fox poo? Who knew?

The incident has occurred twice but as we’ve got rid of the evidence both times, we’ll never know.

You didn’t think to take a photo? Fox shit looks quite a bit different from human shit, even if it’s been curled out by a racist.

I am not the only one who has had a similar experience in London. Just search “poo on doorstep”. It occurs frequently enough to have generated several threads on the internet.

The author lives in London, where I am sure many British people want open and frank discussions about how and why shit has started appearing on the streets, and who is leaving it there. Is that what the author wants? No:

Yet, when ranking the world’s best cities to live in last week, the mighty statisticians of the Economist Intelligence Unit didn’t take into account “likeliness to find a turd on your front doorstep”.

How do you know?

In the 14 years I lived in Lagos, I never once found faeces in front of my house. Yet Lagos is judged one of the 10 least liveable cities in the world, and London comes much higher in the desirability rankings, at number 48.

Firstly, part of the reason London is ranked 48 and not 8 is because it is becoming increasingly filled with people who shit in the streets. Secondly, whereas I confess I never saw a turd in the street in Lagos I put that down to the fact that those shitting in public did so a little off the beaten path. If this lady had a small canal running behind her house, for example, it would probably have resembled an open sewer. This is what greeted a colleague of mine in Nigeria one day when he chanced to look out of his office window: 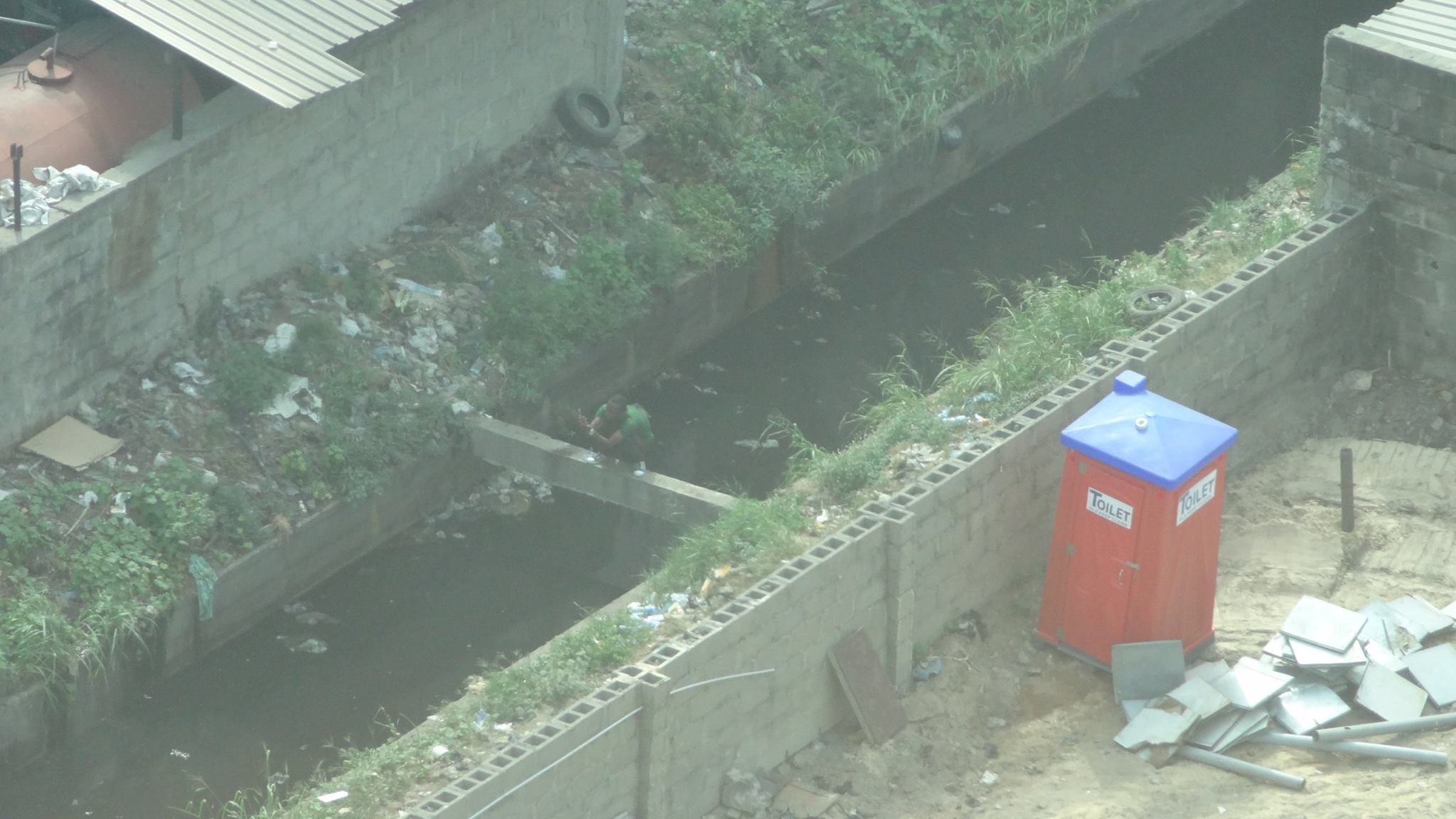 There are in fact two toilets in the photo: the portacabin on the right belonging to a building site and a concrete beam across a drainage canal belonging to whoever feels like taking a dump, in public, in broad daylight (the exact location of the above incident is here).

Granted, I have no problems with some of the things the index does track, such as crime rates, the efficiency of transportation networks, and quality of healthcare. All are important, and improve one’s experience of a city. Lagos scored low in all these categories and as a Lagosian, I readily admit that we can do better in all these areas.

Similarly, when appraising their visit to Baghdad in 1258, the Mongols admitted their conduct could have been gentler.

But I’d certainly question how cities were ranked in some of the other areas that make up the index. In the culture and environment category, which includes recreational activities, Vienna scored 96.3 out of 100 and Lagos just 53.5. Now I’ve been to Vienna, and I’ve lived in Lagos, and there is no way Vienna is 43 points ahead of Lagos in culture and environment.

Whereas I’ll not say Lagos is devoid of culture – it isn’t – the culture that there is, outside of bars showing premier league football and six nations rugby, is wholly Nigerian. Which makes it great for a Lagosian, but for a foreigner it’s not very accessible.

Can we ask him if he believes Lagos to be culturally superior to Vienna? Or do you reckon, what with him being a Parisian, he’ll think the lack of shit on the streets counts against it?

Lagos is a city of galleries under bridges, where artists paint and display for free.

Yeah, I’m sure Vienna has street artists too.

Every weekend there is a royal wedding that shuts down roads and stops traffic.

Erm, this isn’t a good thing. Roads being closed arbitrarily by paramilitary forces in Ray-Bans bearing AK-47s count against cities hoping to elevate themselves on livability indices.

Lagos is a city of fashion, home to the third biggest film industry in the world, and its Afrobeat music pulses out to reach the ears of a global audience.

Whereas Vienna only has Beethoven, Haydn, Mozart, Schubert and Strauss. And who’s heard of them?

It’s obvious the statisticians didn’t know where to look.

In their defence, they were probably advised not to leave the hotel. The author concludes:

So whether you judge Lagos liveable or not, Lagosians will go on living and thriving there.

Yet strangely you left, and moved to London. This is not surprising. I noticed when studying the reaction to my infamous post on Nigeria that its most aggressive defenders seemed to be living abroad and doing quite well.

24 thoughts on “Of Street Turds and Culture”