A story doing the rounds over the last couple of days concerned the New York Times hiring an Asian-American woman by the name of Sarah Jeong to their editorial board. Jeong, who is usually pictured with bright red hair, is 30 years old and a graduate of both Berkeley and Harvard.

The trouble began when eagle-eyed Twitter users discovered Jeong had serious hang-ups about white people and wasn’t shy of airing them. For example: 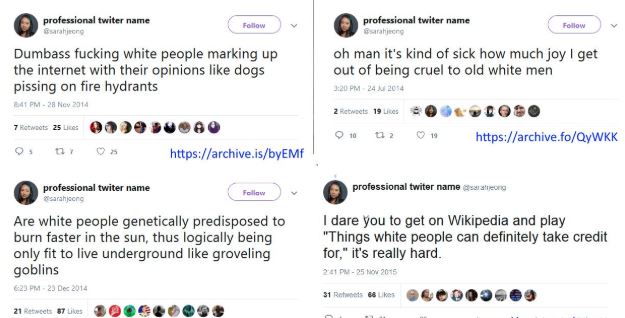 And that’s just a tiny sample, her Twitter history going back years is littered with this stuff.

It wasn’t long before a mob formed demanding she be fired. However, a portion of this mob was made up of people who would ordinarily not want her sacked, but in a world where left-wing mobs can get people (e.g. Kevin Williamson) fired on what seems like a weekly basis, they decided to adopt their enemy’s tactics. The NYT was having none of it though, and issued this statement:

Our statement in response to criticism of the hiring of Sarah Jeong. pic.twitter.com/WryIgbaoqg

Now this is pretty pathetic: as the many examples of Jeong’s tweets show, she was not “responding to harassment” and it is doubtful she regrets her behaviour (as if that was enough to stop a right-winger being lynched). However, I believe the NYT was right to stand behind her, only not for the silly reasons they give in that statement. What they should have said was this:

“We were of course fully aware of Sarah Jeong’s opinions expressed on Twitter – we are not complete morons, we do check this stuff. However, we see no reason to believe why such opinions make her unfit to serve on our editorial board, indeed we think they’re a sign she’ll fit right in. Therefore, she will assume her post as intended.”

This would have the advantage of being absolutely true, and be a sign that the NYT management are at least prepared to stand by their decisions. Rather than howl with outrage at her appointment, people should just take it as a clear indication of what sort of outfit the NYT is and afford it a commensurate degree of respect. Firing Jeong won’t solve anything, the problem is she was hired in the first place; she’s merely a symptom of a much deeper malaise.

Sarah Jeong is an over-privileged idiot who sounds for all the world like she’s bitter over her high school crush taking a white girl to the prom instead of her. If she’s 30 now, I doubt she’ll ever grow up. But it was the NYT‘s decision to hire her in full knowledge of who she was, and they should either stand by that or the people responsible resign.

77 thoughts on “The NYT and Sarah Jeong”