Sorry, but it would take a heart of stone:

Standing in the middle of Times Square, it wasn’t super hot, but the pressure of what I was about to do was making me sweat. My fingers slipped against the fabric of my maxi skirt as I fumbled with the tightly-knotted bow. My outfit fell away, revealing my pink bikini beneath it. I heard hollers from strangers, but their words blurred into an indecipherable mess as I tried, unsuccessfully, to remain calm. A sliver of sun peeked out from behind the skyscrapers, reminding me we were about to lose the light. No more time for nerves — it was now or never.

“Let’s do this,” I said out loud. My clothes dropped all the way to the ground, and the voices around me became clear.

“I want to suck on them tasty toes.”

“Hey baby, let me butter them biscuits for you.”

I looked up to see three men with camera phones filming me. Our eyes met, and one uttered, “Twerk for the camera baby, show them how that ass clap.”

Tears began to well up. I was prepared to be pointed at, shamed, and called fat. I didn’t expect to be fetishized.

It’s New York, you have to be a certificate weirdo to live there. Well, in Brooklyn anyway.

The world only really sees plus imagery that is perfected and somewhat vanilla — usually that of smaller, perfectly proportioned curvy women. It didn’t need another stock image of an hourglass figure, in an indiscernible space, wearing a one-piece. I wanted to make a statement and I wanted to be seen — I’m more than my body and I deserve respect and human decency.

Respect is earned, and it comes a lot easier if you first show some self-respect. Standing in a bikini in Times Square is a sign you don’t have much, regardless of what you look like. For example:

Fifty feet to my right in the busy, tourist-filled space were two thin, large-busted women, wearing only g-strings and some body paint. I watched them with envy. Nobody yelled at them as they worked to hustle up a few dollars selling photos with eager tourists. They were just another part of New York. 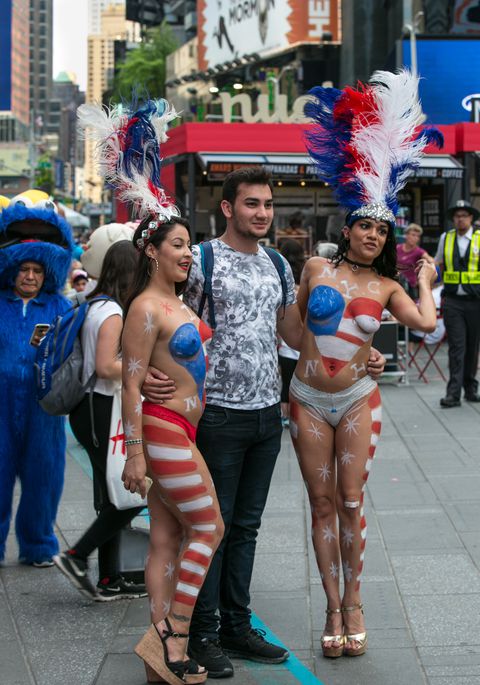 Harmless enough, but probably not something you’d want your daughter doing. The bloke dressed as Elmo has more self-respect than these two – or the author.

My mind jolted back to my reality as a man reached forward to hand me his mixed CD.

As I pushed it away, he tried to grab hold of my wrist to talk to me. I yanked my hand back. “Hard pass,” I screamed with the toughest face I could muster. “No thank you. Please leave me alone.”

Hard pass? What the hell does that mean?

My tears turned to anger, and the words began to fly out of my mouth: “It doesn’t make it OK. You’re disgusting. Please stop. Please just stop…” The man justified his response by saying that plus women “don’t know they’re f*ckable.”

So men are supposed to approve of big women…but not that much.

The world might be a nicer, sweeter place if this were true, but it patently isn’t: hot women tend to be valued more highly (by both men and women) than swamp-donkeys. Marilyn Monroe didn’t get rich and famous because of her brains, did she?

You don’t exist to pleasure someone else … you exist to change the world.

Oh really? By standing around in a bikini in Times Square?

My rant was interrupted as another man carrying a “Give me cash for weed” sign passed between us.

He looked at me, grimaced, and shouted out an uninspired fat joke, grinning proudly. Little did he know he’d just done me a favor by silencing the other men and causing a distraction.

Some heroes wear capes, others crack fat jokes while begging for weed.

A crowd fully formed after that, and the men who had made the lewd comments remained relatively silent. The film crew told me I should only do what I felt comfortable doing, and that we could stop if I wanted to. A few minutes passed, and I was able to reset myself and push away my experience with the lewd commenters. Now I was safely in model mode. Pose. Click. Pose. Click. Magic.

Harry Potter and the Goblet of Eye Bleach.

Still, as I turned around for some side-angle shots, I noticed one of the men had continued to film me from behind.

Was it David Attenborough?

In nearly every image I have, you can see him standing there, holding his camera-phone up at the perfect height to capture my backside. I was faceless to him. I was just a body he wanted to exploit and use. My feelings didn’t matter.

You’re standing in Times Square in what amounts to a colossal display of attention-seeking and you’re upset people are paying you attention? Isn’t that the idea? And since when have people been obliged to consider the feelings of exhibitionists?

I felt humiliated and questioned why I was even enduring all of this.

Something which no doubt occurred to those unfortunate enough to pass by.

I considered stepping down and ending the shoot early — it only had been about 15 minutes — but just when I was about to give up, my eye caught sight of a little girl in a red tank top and denim overalls watching me.

I waved at her, and she returned my gesture with the biggest grin.

I realized in that moment, it had all been worth it. I had been seen.

Can you imagine if a man had gone to Times Square, put on a pair of budgie-smugglers, and written an article exclaiming it was worth it only once a child had signaled their approval?

This woman is clearly insane; little wonder she headed to New York.

20 thoughts on “Attention seeker gets attention, doesn’t like it”