The retirement of Justice Anthony Kennedy from the US Supreme Court aged 81 has sent liberals into meltdown, with some reacting as if he’d committed high treason. The reason for this is Donald Trump gets to nominate his successor, and he’s likely to choose someone conservative. That the Supreme Court is seen as divided between conservatives and liberals, and such importance is placed on what sort of judge is appointed by a sitting president, strongly suggests that it’s simply another political branch of the government rather than an impartial arbiter of the law. Indeed, a lot of liberals are now worried the balance of the Supreme Court is going to lean towards those who interpret the constitution faithfully, as opposed – presumably – to those who imagine what the document’s authors would prefer were they around today.

This most recent session of the Supreme Court has been interesting, but also rather worrying. Two cases – Janus v. State, County, and Municipal Employees and Trump v. Hawaii – were ruled 5-4, and when you read  the dissents it’s clear some judges are simply political operatives. The two worst offenders are Elena Kagan and Sonia Sotomayor, both appointed by Barack Obama. Janus concerns the practice of forcing all non-unionised public sector workers to pay union dues regardless of membership, on the grounds that non-members receive the benefits negotiated by the union. It’s long been the case that unions have used these funds to campaign politically, almost always on behalf of the Democrats, and now the Supreme Court has ruled the compulsion unconstitutional. Here’s what Elena Kagan said in her dissent: 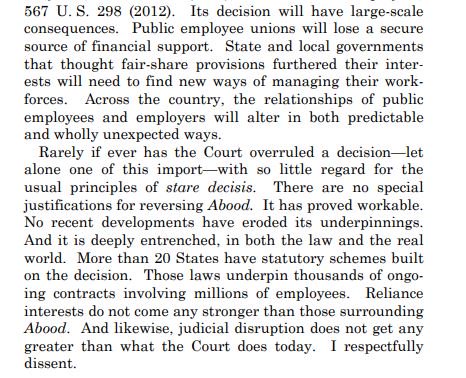 Basically, she’s dissenting not on the grounds of law and constitutionality but because public sector unions, on whom the Democrats are dependent for funding, will now lose money. The best that can be said about this is it’s at least refreshing in its honesty. Here she is again in the same dissent: 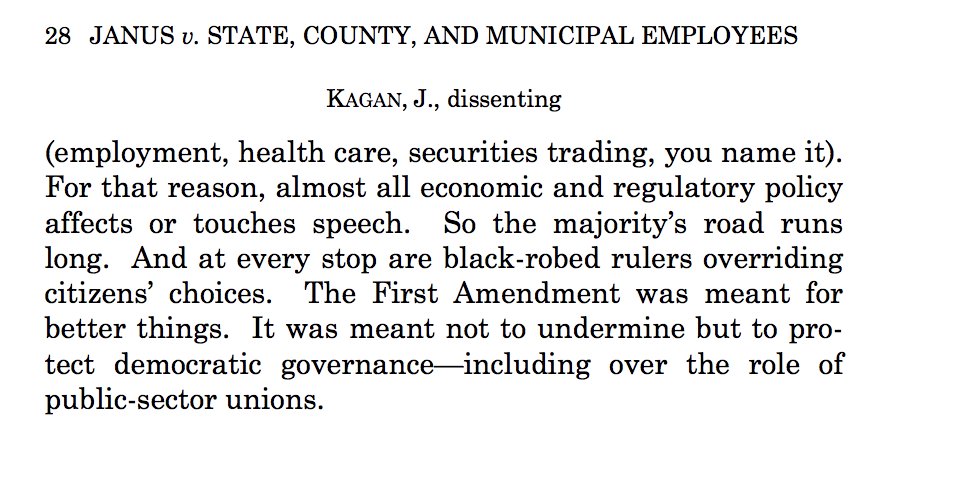 That’s right: the Supreme Court should not strike down “citizens’ choices” which are unconstitutional (i.e. illegal), and the First Amendment was supposed to make governing easier and help public sector unions.

Trump v Hawaii concerned the so-called Muslim Ban, a term Trump’s opponents used to convince people that the temporary restrictions he placed on people from 6 countries with no functioning government (Iran excepted) was motivated by anti-Muslim bigotry. Never mind that citizens from Indonesia, Pakistan, and Bangladesh – the three countries with the largest Muslim populations – were not affected, the mud was slung and it stuck, and it appears even Supreme Court judges bought it. The SCOTUS ruled – sensibly – that restrictions on immigration falls within the constitutional authority of the President regardless of speculation as to his motives, but Sonia Sotomayor – the self-described “wise Latina” – dissented: 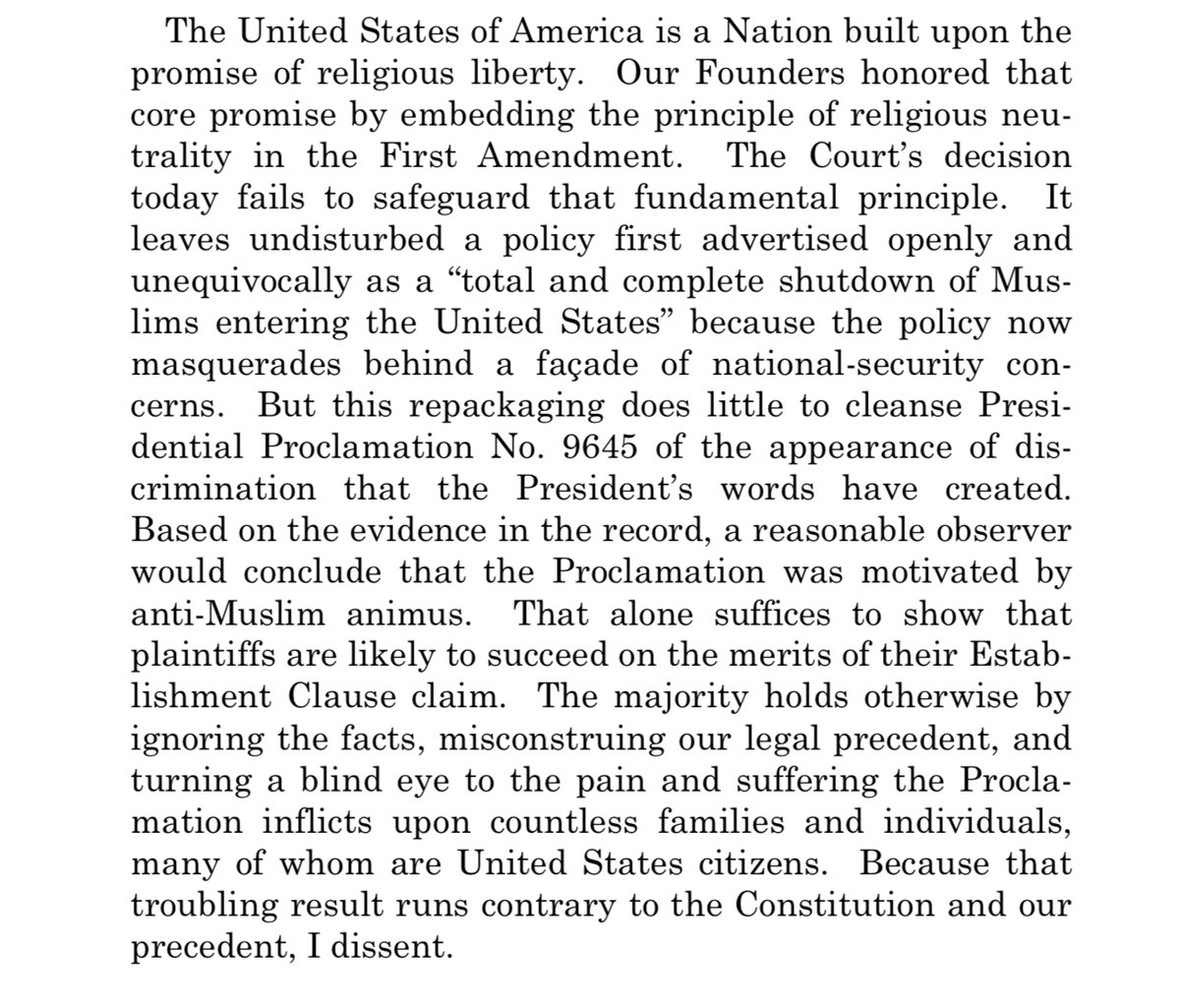 Reading Kagan and Sotomayor’s dissents in these recent cases reminds me of Andrew Adonis, the mate of Tony Blair who was appointed to the Lords and is now vociferously campaigning to overturn the Brexit vote. All three are intellectual lightweights appointed in turn by intellectual lightweights, and none appears to fully grasp the positions in which they now find themselves. And this is the problem with liberals and the left in general: to people of this bent everything is political, it never stops being political, and their political goals must come before anything else be it the law or the expressed will of the people.

So now it’s been established that the Supreme Court is merely a political debating chamber, Kennedy’s resignation and the looming prospect of a conservative replacement puts things into a whole new perspective. As the BBC says:

Shortly after Mr Kennedy announced his retirement, Supreme Court analyst Jeffrey Toobin tweeted that “abortion will be illegal in 20 states in 18 months” – an indication that he believes Mr Trump’s nominee will join a majority in reversing Roe v Wade, the 1973 decision legalising abortion throughout the US.

Anti-abortion advocates have been trying to scale back the broad constitutional guarantees of the Roe decision in the decades since, and now – without Mr Kennedy on the court – they could be poised for a breakthrough.

The problem the US has with abortion is, unlike in most European countries, they didn’t permit the practice by following the normal legislative process. Instead of a political party running on the platform of allowing abortion and implementing the legislation once in office, they simply got the Supreme Court to declare it a constitutional right – and they did the same thing with gay marriage. They took this route because they knew full well any politician running on a pro-abortion or pro-gay marriage ticket would likely lose, so the ruling classes implemented it via the courts. Only now we’re discovering these so called fundamental, inalienable rights are heavily dependent on how 5 people on the 9-body Supreme Court think, and when the judges change so do the rights. Which proves, if this were in any doubt, that rights do not exist in a vacuum and must ultimately be upheld by individuals who come with their own prejudices and biases.

I doubt Roe v Wade or the gay marriage decision is going to be overturned during a Trump administration, but those in full-blown panic mode have only themselves to blame. If you choose to be ruled by appointed judges instead of elected representatives – which all those who supported these two cases did, at least in part – you can’t complain when new judges come along and make decisions you don’t like. I can see this is going to plague American politics for decades to come, and Presidential elections will become more important for the candidates’ potential Supreme Court nominations than for their actual policies. Indeed, it could be argued many conservatives voted for Trump in 2016 purely to stop Hillary packing the Supreme Court with liberals (aside from Kennedy, Ruth Bader Gingsburg  is 85 years old; if Trump wins a second term, he’ll almost certainly get to nominate another).

What the US needs to do is clamp down hard on activist judges, and refrain from putting people in the highest courts who use their position to achieve defined political outcomes rather than interpret the law. For all Trump’s faults, his nomination of Neil Gorsuch to  the Supreme Court seems to be an inspired one in this regard. The trouble is, as I’ve already said, for the left – and probably a few on the right as well – everything is political, and the courts are simply another weapon to be deployed in the struggle to achieve political goals. I expect much misery will have to be endured before Americans realise the importance of an impartial, non-policised judiciary again.

(If anyone is interested, my thoughts on the Supreme Court’s gay marriage decision as I wrote them at the time are here.)

19 thoughts on “Changes in the US Supreme Court”