In the past week or so a new term has entered into the mainstream lexicon: incel, which is an abbreviation of involuntarily celibate. It is the word used to describe angry young men who can’t get laid and then go onto commit acts of violence, often describing their lack of success with women as motivation for their crimes. The term has come to prominence because someone fitting this description drove a van into a bunch of people in Toronto, killing 10.

There is no doubt that the Toronto van driver and others like him display deep-rooted misogyny and hate women, but nevertheless it’s worth trying to understand how and why they became so alienated. However, feminist Twitter is having none of it, believing social ostracism and mental illness is something to be disregarded entirely insofar as men are concerned. As usual, feminist bellwether Natalia Antonova provides a neat example: 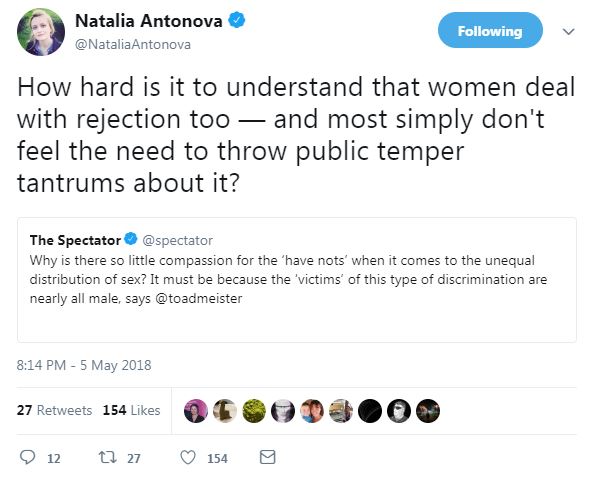 Firstly, allow me to mention the irony that a journalist and playwright is seemingly unaware of the term “Hell hath no fury like a woman scorned”.

Secondly, what else is the third-wave feminist movement but a planet-sized temper tantrum that the sexual revolution didn’t deliver as promised in terms of power, prestige – and romantic partners? It sure as hell isn’t about rights, given the movement’s roots in American academia and its proponents overwhelmingly coming from coastal, metropolitan liberal arts circles where women enjoy more rights than at any point in human history. Modern, western feminism is largely about self-entitled, privileged, middle-class women demanding nice things in life they are not prepared to earn, preferring to believe it’s the unreasonableness of men that is preventing them attaining what they so richly deserve.

In terms of dealing with rejection – something all of us must face throughout our lives – feminists are no better than incels. True, they don’t go around murdering people with vans but their effect on society has been equally if not more destructive. And say what you like about deranged, homicidal incels but they at least refrain from giving self-righteous lectures about how virtuous they are when the full extent of the carnage is known. The feminist reaction to incels is that of a self-declared victim group protecting its turf and ensuring they have a monopoly on gender-based suffering; any and all sympathy or understanding for those confused, angry, and ostracised by the opposite sex must go to feminists and nobody else. Either that, or they’re simply upset because, amid all the hysterical screeching and yelling, some men are trying to get a word in edgeways.

Whatever the case, there’s not a whole lot of difference that I can see between lunatic incels and deranged, third-wave feminists.