So here I am railing against other outfits for not concentrating on their core business while I’m abandoning my very own. It’s time for a post on polyamory:

When people think of polyamorous relationships, they usually jump right to the potential complications: How will you deal with jealousy?

Indeed, how do you deal with… 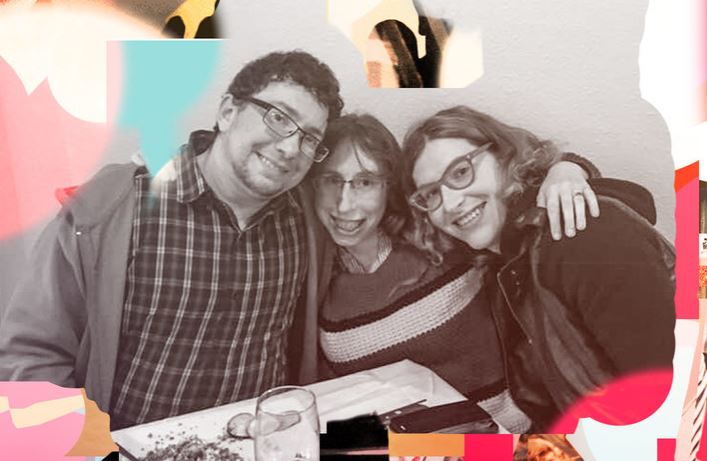 So his wife moved her girlfriend in, but he doesn’t get to have threesomes. How disappointing. Can he at least watch?

A typical day at our house begins at 6 a.m., when I grab my laptop from my bedside table and begin my work for Slate without getting dressed, or even out of bed.

A paragraph which adequately explains the quality of Slate’s content.

When it was just the two of us, my wife’s breakfast and morning routine often got in the way of my early-morning productivity. I’d feel obliged to keep her company at breakfast, chat about our plans for the day, and help her find her missing shoe (under the blanket, dear, on the floor by the couch).

Of all the problems associated with marriage and compatibility, the concept of giving the other person “space” in the morning is one I’ve found most couples understand and solve almost immediately.

She and Cassie feed and walk our dogs, plan their days, and commute together to their respective workplaces. I get a plate of bacon and eggs brought into the bedroom as I work.

For the first time in almost two years of writing about polyamory, I’m finally beginning to see an upside.

It’s probably not surprising that it’s great to have the income of an extra working adult as well. A rent we could afford as two becomes easy as pie with three, and there’s something extra relaxing about the nights when Mandy treats both of us out to dinner. It’s really common sense—if pooling resources between two people is good, pooling them with three is great!

This might be true in this case, but most polyamorists I’ve come across have been flat broke; generally they’re fuckups by nature. But what the guy is describing above (and the preceding paragraph about the division of household labour) is as much an argument for having a lodger as being polyamorous.

Before I lived with my wife’s girlfriend, I might have said that having an extra person would only make the conflicts and disagreements of daily life that much harder to work out. Instead, for our family, we’ve found the opposite is true.

I don’t know how long this arrangement has been going on, but I reckon this guy is in serious danger of being turfed out on his ear at any minute. What the article also fails to mention is that he’s transgender. Remember folks, polyamory is a perfectly normal thing which perfectly normal people do.