Following on from yesterday’s post on friendships and politics, let me jump back in time to September 1996. That month, 3 people joined about 120 others in starting a course in Mechanical Engineering at the University of Manchester: me, a chap from Worcester called Simon, and a Northern Irishman from Strabane I’ll refer to simply as G.

G had grown up in a staunchly nationalist part of Northern Ireland in a Catholic family, and to say he was brainwashed when he came to Manchester is an understatement. He was 19 years of age and all he’d known was the Troubles: they dominated his life, they defined who he was, and they constituted the bulk of any conversation you’d have with him. Of course, being from Strabane, nobody had the first clue what he was saying (including other Irishmen). Most people thought he was some weird foreigner who couldn’t speak English, which I suppose he was. He left Northern Ireland an insecure, angry young man, appalled at what he saw were gross injustices committed by Britain in the province and pre-independence Eire. He was an avid supporter of the IRA and Sinn Fein, and we learned later he’d come very close to joining the IRA in person.

His two best friends at university, who he met almost immediately, were me – a loudmouth from Wales as insecure as he was – and Simon, a big, blonde, grinning mountain of a man who was very good at rugby and not in the slightest bit insecure. Simon and G had little in common, whereas I had things in common with the both of them, but they got along famously. In those early months, G used to bombard us with lengthy harangues on Northern Ireland much to the bemusement of Simon who barely knew where it was, let alone what all the fuss was about. I knew a bit more and used to argue back, or take the piss. Mostly it was taking the piss. Then in February 1997 Simon, acting on a whim, joined the Royal Marine Reserves. He threw himself completely into the Marines, largely abandoning his studies, and within 9 months or so passed the Commando tests and got his green beret. From then on, he was 100% a military man.

Now this was a time when the Royal Marines were still being deployed to Northern Ireland. Their reputation wasn’t as bad as the Parachute Regiment’s, but it wasn’t good either. Simon’s new hobby put G in a bit of a quandry; he was supposed to go around blowing up British soldiers, not be best friends with them. He tried bringing it up with Simon, but couldn’t get him to take him seriously:

“Simon, what if you get sent to Northern Ireland. Could you shoot me if you were told to?”

“Seriously Simon, could you do it?”

“Of course I could! I’ll shoot you now if you like!”

At some point in that first year we all went home to study for exams. G needed me to send him some course notes and gave me his address in Strabane. I sent them, but included a load of UVF propaganda, some signing on forms, a picture of King William of Orange, and a red hand of Ulster.

“What the fock is all this shite you’ve sent me, you daft focker?”

was the phone call I got shortly after. And this was the thing: the Northern Ireland troubles were G’s entire world, but he found to his dismay that almost nobody in Manchester knew anything about them, much less cared. He would launch into a diatribe about black and tans or some other obscure nationalist sore point, and nobody would have the faintest idea what he was on about. When he’d explain these supposedly gross injustices, everyone would just shrug and agree with him, even to the point of saying Britain should give up their presence in Northern Ireland if that’s what G wanted. For someone who’d grown up in a place where this was a life and death matter, he couldn’t understand it. How could nobody care? Some time later he played us a tape of IRA music, and we just laughed at how bad the recording was. I went even further and took the piss out of the lyrics. It dawned on G that this was a bit of an embarrassment.

Within a year the rhetoric had halved. He accepted Simon being in the military because he realised he was a good bloke and wasn’t the enemy, and he found much more important things to occupy his mind, such as his studies, the welfare of his siblings, and his precarious financial situation. There was a chap on our course from Belfast called William – I’ll let you guess which side of the sectarian divide he was from – and G got on with him just fine. When it came down to it, G was a sensible chap. He’d got himself out of Northern Ireland to better himself, not to remain stuck where he was.

By the time the next year was out, G barely mentioned Northern Irish politics and they only came up when Simon or I wanted to take the piss. He’d embedded himself firmly in Manchester, got his head down into the books, got himself an English girlfriend and moved in with her. One of his siblings was now studying in Glasgow, and he was looking out for her. His world had opened up and totally changed his outlook; more importantly, he’d grown up. He’d worked out what was important in life and abandoned the nonsense that was dragging him down. Any time later when the subject came up he’d say:

“Fock that shite, I can’t be arsed with it.”

I don’t think I’ve ever seen such a positive turnaround in anyone in such a short space of time. We all changed, of course; the period between ages 19 and 23 were huge for me in terms of laying the base of who I’d become, and both G and Simon played a major role in that (usually by keeping me on the straight and narrow when there was a danger of me wandering off it). Simon changed less, mainly because he was a confident, successful young man by age 19 anyway. But the change in G’s mindset was remarkable.

After university we each went our separate ways. Simon immediately joined the Royal Marines as an officer (still saying he was looking forward to shooting G), G went first to Dublin then back to Manchester, and I stayed in Manchester before emigrating. But we stayed best friends; I was Simon’s best man at his wedding in 2005, and we both went to G’s wedding in 2014 where we got hammered and made idiots of ourselves. Even though we’d stayed in regular contact, G’s wedding was the first time the three of us had been together in a long time, and only the second time in almost a decade. Sadly, it was also the last time: Simon got diagnosed with a particularly nasty form of cancer and died in July 2016 aged 38, still serving in the Royal Marines having attained the rank of lieutenant-colonel; G and I blubbered together at his graveside. We returned to his grave last December, and drank beers in what we believed was his presence.

My point in all this? Politics isn’t everything and, when it comes to friendships, shouldn’t be anything at all. If G can get over his brainwashing and become best friends with a Royal Marine, anything’s possible. I still take the piss out of G for his attitude back then, and I still mock the lyrics of that daft IRA song he made us listen to, and watch him go red and swear at me. Simon would too, if he was still around. Good times, great friends. 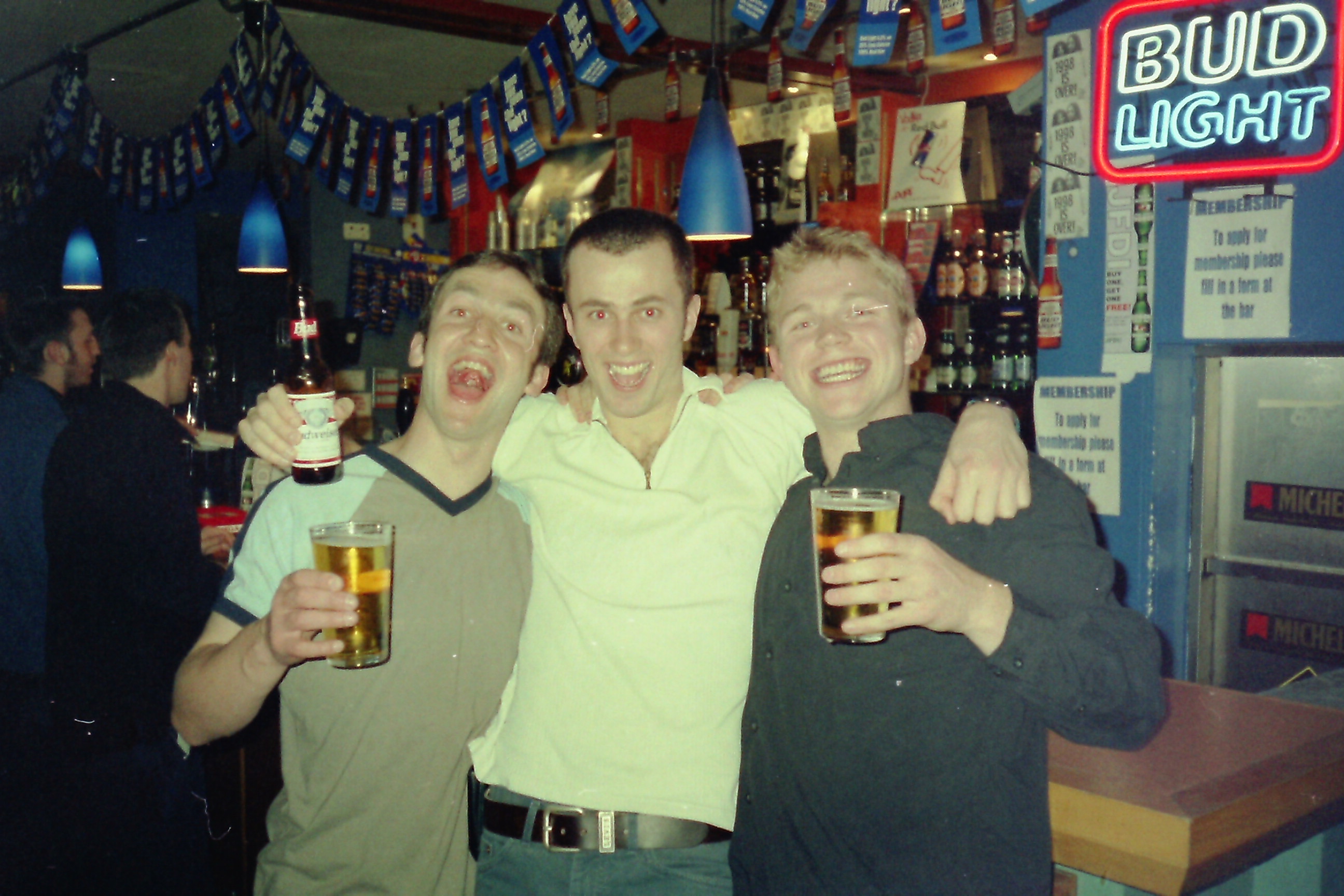