You see a lot of this in America and Australia, especially around St. Patrick’s day: 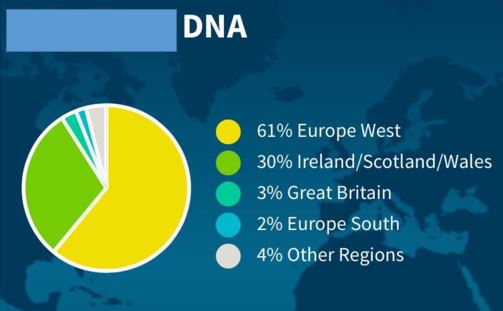 It’s supposed to be the result of a DNA test showing someone’s ancestry, but I suspect it has all the authenticity of a fortune teller’s output. For a start, Scotland and Wales are part of Great Britain. Do people’s DNA differ between Wales and England? Not likely. The same is probably true for Scotland and England. If it isn’t, then Ireland, Scotland, and Wales shouldn’t be lumped in together.

What this is about is giving colonials the impression they have some Gaelic or Celtic blood, which conjours up romantic images of Mel Gibson and twee cottages on the cliffs of Ireland. What they really don’t want to hear is that they’re English because, as everyone knows, they spent centuries riding around on horseback in spotless finery oppressing anyone who didn’t use received pronunciation. That’s why England doesn’t get mentioned in the chart above.

So desperate are the colonials to not appear English, they fail to understand how percentages work. “I’m a quarter Irish on my father’s side,” they declare. “That’s why we called our son Liam.” So what are the other three-quarters? English, of course, but they don’t boast that Grandpa was from Essex and call their kid Kev.

On a similar subject, it’s interesting to note how St. Patrick’s day has become a meaningless excuse to get hammered while displaying just about every ignorant stereotype about Irish people you can imagine. If you were to do this with any other group, you’d have Plod arresting people for hate crimes en masse, but the Irish seem to endorse this farce. Or at least, they don’t complain about it. I do wonder what they think, though: of all the people I saw on social media over the weekend dressed as leprechauns and dyeing everything green, none of them were actually Irish. Back when I was in university my Irish mate used to celebrate St. Patrick’s day by going to the nearest Irish pub and drinking a few pints of Guinness and I used to join him, but it was nothing like the circus it is now. I don’t think he’s bothered with it in years, and nor have I.

Then again, perhaps it’s a fitting metaphor for the country itself, which is looking increasingly like a tacky tourist attraction run by people who sold themselves out years ago and support a version of history and culture which is largely imagined.

21 thoughts on “Anything but English”