A few years ago, when I was roaming the wilds of the planet with various oil companies, I was sat with my sister, who is a journalist, pitching ideas for a story at her. I could have directed her towards umpteen utterly scandalous situations, but each time she said:

“But what’s the British angle? For a British publication, there has to be a British interest in it somewhere.”

Flicking open The Guardian yesterday, it seems establishing a British angle is a lot easier than I thought. Consider this article by Natalia Antonova (yes, she of “survivor” fame):

From Britain to Ukraine, the far right is thriving on shared emotion

And what better person to delve into the British national psyche than “a Ukrainian journalist and playwright based in New York”?

While reports of Britons being recruited by Ukrainian neo-Nazis to fight in a war against Russia appear to be somewhat exaggerated – two men hardly constitutes some sort of far-right stampede to the eastern edge of Europe – this is a good time to remember that hate is on the upswing, and to think of it as a localised phenomenon is to miss the bigger picture.

Two unnamed men hardly constitutes anything, but is more than enough to justify running the author’s garbled opinions in The Guardian. British angle, indeed.

Members of the Ukrainian and the Russian far right are willing to riddle each other with very many bullet holes over such issues as the legacy of the second world war, and who the real heroes were. Ask them about abortion, however, or feminism, or migration, or antisemitism, or LGBT rights, or human rights in general, or, for that matter, government transparency and accountability, and suddenly these mortal enemies will seem more like good buddies who had a little tiff over history and national identity but will happily join forces to oppress whoever gets in their way, should the current conflict come to an end.

Warring militias on Russia’s borders don’t share the same social justice goals as a journalist in Brooklyn? Who knew? And note the casual assumption that anyone who opposes abortion is far right, and that a lack of government transparency and accountability is a hallmark of the same group. Because the left are paragons of virtue when it comes to those two things, aren’t they?

As the editors of the anarchist publication Nihilist.li have argued, “the differences between the Kremlin and Ukrainian fascists are tactical – not strategic … Both Russian and Ukrainian far-right groups have the same values and the same political ideal – crony capitalism.”

Good job those two British chaps allegedly went to Ukraine, isn’t it? Otherwise we’d be wondering why she doesn’t harangue some Ukrainians about this.

Eh? Why is it Britain’s concern that there might be far right Ukrainians? In the 2017 UK General Election, not a single far right party stood in any meaningful sense, let alone won. Even if we accept the left’s description of UKIP as being far right, they got wiped out. Is Antonova even aware of the makeup of Britain’s political parties?

In looking for solutions, we should consider the predicament the US now finds itself in – with a blatantly racist president who will reward any far-right group for as long as it sings his praises.

Presumably for reasons of space – or relevance – Antonova doesn’t cite a single one of these far right groups, nor how Trump rewarded them. But she calls him racist, so there’s that.

Reporters from elite publications are regularly parachuted into towns and districts that represent Trump’s “base” in order to file bewildered, slightly apocalyptic reports on how there are millions of Americans out there who do not care that the man they elected thinks there are “both sides” to a conflict involving murderous far-right violence.

Note that the problem here lies not with not bubble-dwelling “reporters from elite publications”, but the ordinary person who doesn’t subscribe to cartoon depictions of the US president.

Even as we continue to combat fake news, it has become glaringly obvious that facts alone won’t reach these racists and cheerleaders for racism – because support for Trump comes from a place that’s wholly different to the place where we compile and analyse facts.

She actually had the temerity to include this paragraph in an article whose entire premise rests on two unnamed “far right” Brits allegedly being recruited by Ukrainian neo-nazis.

Far-right advances across nations embolden the far right in other nations. This trend is likely to continue – and this is why a couple of Britons travelling to Ukraine to fight alongside neo-Nazis is something to take notice of.

Possibly at the editor’s insistence, we’re back to these two Brits again. Remember how often we were told not to worry about tens of thousands of citizens from European countries going to Iraq and Syria to fight with ISIS? That’s because the real issue is British neo-Nazis flocking to Ukraine in such numbers they couldn’t even form a relay team.

The causes of our current predicament can be debated – certainly a great number of economic and social factors are at play – but what matters is the simple realisation that what binds members of far-right groups can be exploited for good. Shared humanity, the idea of belonging to a common cause – these are the tools we have at our disposal if we wish to adequately address the rising tide of hate.

Somebody actually paid for this guff. True they only paid £90, but still.

To bring this back to Lakoff, what matters right now is not so much what far-right hate groups think, but what their members feel and believe.

Uh-huh. Now perhaps I’m being unfair. There’s no reason why a Ukrainian feminist living in Brooklyn should not be able to understand and write articles about British social issues in a national newspaper, so with that in mind I roamed around looking for what other insights she’s provided on the subject. And then I came across this: 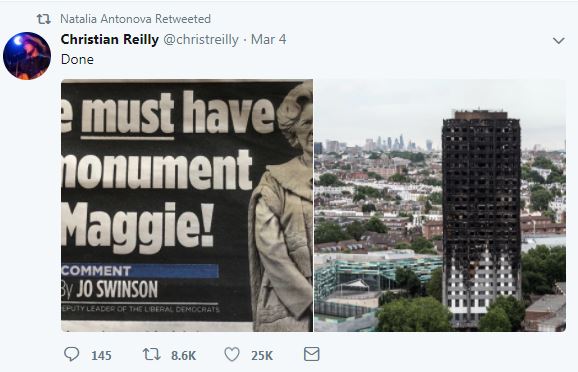 17 thoughts on “A Brace of British Brownshirts”