At least a decade after rugby and cricket introduced video technology to help on-field referees and umpires fairly adjudicate matches, English football is now experimenting with it for FA Cup games. The results are rather amusing:

At times, fans had no idea what was going on as the referee waited for instructions in his earpiece and the half-time whistle was greeted by a chorus of boos from home supporters.

Lamela’s early goal was disallowed after the VAR ruled Llorente had pulled Harrison McGahey’s shirt – but it took about a minute for the officials to reach their decision, by which time both teams had lined up for the game to restart.

After Son had fired Spurs ahead from 12 yards when he was afforded too much space, the hosts were awarded a penalty when Trippier was fouled by Matt Done. At first, the referee gave a free-kick on the edge of the area before pointing to the spot after another VAR delay.

Son scored from the spot but the celebrations were cut short when Tierney ruled it out without allowing it to be retaken because the South Korea forward, who was booked, had stopped in his run-up.

Video technology had teething problems when first introduced to rugby and cricket, but not like this. For a start, there seems to be some debate over what the rules actually are, never mind how they are applied in a video replay. The video assistant referee (VAR) awarded the penalty last night because, although the foul had “started” outside the area, it “continued” into the penalty area. This could well be the first time in footballing history that such a justification has been used to award a penalty. It happens occasionally in other sports, but rarely does one get the impression watching replays in rugby or cricket that the assistant referee or third umpire is watching entirely different footage and applying quite different rules from what we’re used to.

Moreover, the entire system is a shambolic, amateur effort. In a previous match, the screen the referee reviews was propped up at the end of the tunnel, and he had to run over to watch it. 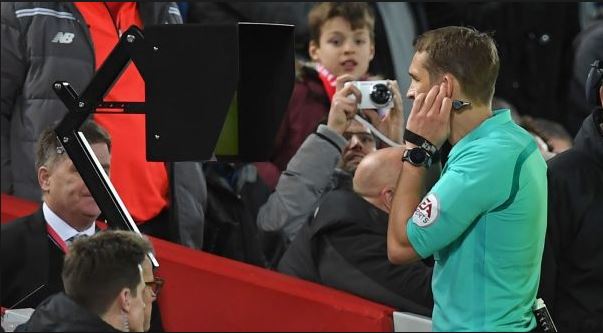 This happened at Anfield, where there is no big screen. Then during a Manchester United match this graphic popped up on millions of TV screens around the world as viewers waited for the VAR to rule on an offside call: 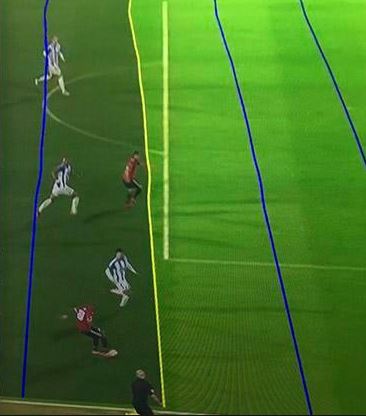 Somebody later explained this line wasn’t actually used to make the offside call:

A technical issue led to an incorrect graphic being provided by Hawk-Eye to @btsportfootball last night. To confirm, the #VAR saw the correct image with the correct lines to make the decision. This was a case of the wrong image being provided to the broadcaster and we apologise. pic.twitter.com/QqbAWVfbi1

But nobody explained what the hell this “wrong image” was supposed to be depicting. Why did it even exist?

I suppose I should have known better, this being football, but I’d have thought the FA would have brought in some serious professionals, trained the referees and technical people properly, coordinated with the broadcasters, and done several weeks of dry practice-runs using old footage to iron out any teething problems. Instead, it looks as though they’ve handed the whole lot off to a bunch of amateurs who are making it up as they go along. Sure we can expect a few problems in the first few weeks, but given how long this technology has been around, you’d have thought the world’s number one sport could do better than this.

I’m half-minded to think this is being done deliberately, to justify not taking the VAR system any further. If so, they’re doing a good job of it.