A month or so back some people I follow on Twitter who are Russian-focused recommended someone’s writing, so I followed her. Thus far I’ve not seen much to justify the recommendation (her latest piece is a lame satire of Trump, as if there’s a shortage of that sort of thing) but following such people can nevertheless throw up some interesting discussion points. Last night the lady in question, a Ukrainian-American, took to Twitter to complain about how men stereotype her. Here’s how I responded to one of her tweets:

Bear in mind she started the topic with “Let’s talk about stereotypes of Slavic women”, and that she purports to be a professional writer and journalist; in my naivety I thought maybe she actually wanted a discussion. It turned out she didn’t, but I see no reason why I shouldn’t have one here.

Russian women do get stereotyped and it can be unpleasant for a normal woman when its assumed she’s a whore. But, as I point out in my tweet, there’s a reason for this. My Turkish friend, for example, takes a very dim view of Russian women because in her home country they are synonymous with the thousands of prostitutes who turned up to ply their trade, many of whom were at the very low end of the business having unprotected sex with truck drivers which spread disease and broke up families. It might be a view that’s unfair to Russian women, but my friend hasn’t had the pleasure of meeting ordinary Russians and so she’s going on what she knows. And there is no denying that there are a lot of Russian, Ukrainian, and Polish prostitutes working in European cities – more than Turkish, Egyptian, and Portuguese, for instance.

If I walk into a bar in Thailand, or even down the street, the locals assume I’m interested in a prostitute. If I found myself in Pat’s Bar in Lagos after the rugby had finished, most people in there would think I was after a prostitute. If I went into the York International Hotel in Dubai in 2004, most people would assume I was there for the hookers. Similarly, when Brits turn up in certain Mediterranean holiday resorts, the locals expect trouble. If the England soccer team are playing away, the local police flip the safety catch off the water cannon before they’ve even cleared immigration. Any discussion on stereotypes and assumptions made about you based on your nationality must take into account the origins of those stereotypes. So in the case of this lady above, she ought to at least acknowledge that, for many people – especially the Arabs and South Asians she mentions specifically – the only Russian or Ukrainian women they’ve ever encountered have been prostitutes, and that many of her compatriots are prostitutes.

Ah, but this is Twitter and I should have known better. Within minutes of posting the white-knights appeared. 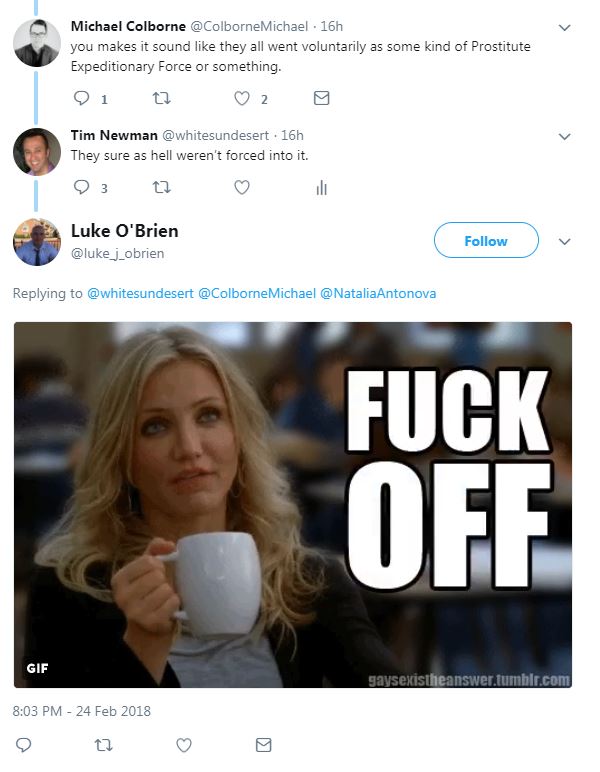 Alas, this is pretty standard on Twitter: a vaguely attractive woman posts something and you get a handful of men falling over themselves to agree with her. If you say something remotely contradictory, they all pile in. This is why I am so fond of this pic (origin unknown): 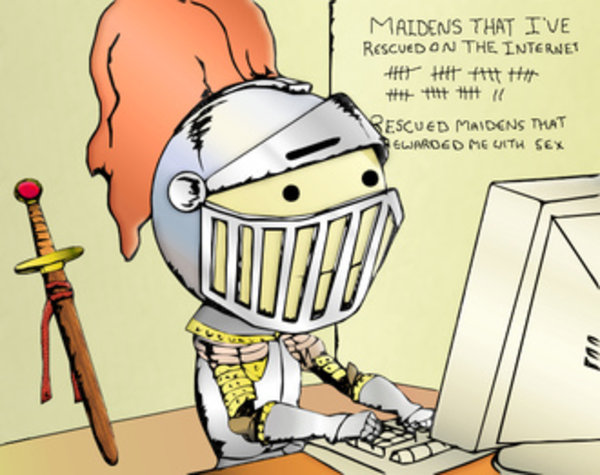 Naturally, the original poster didn’t respond, but was content to like the responses to me. But that’s by the by. What i found ironic is the assumption that these tens of thousands of Russian and Ukrainian women who worked as prostitutes had no choice (note the usual lefty debating trick of deliberately conflating “most”, “many”, and “all”).

There’s a habit of western men when they first meet a bunch of developing-world prostitutes to assume they’re all bright young things down on their luck whom life has dealt a miserable hand and they’re in need of saving by someone just like them. Anyone who’s spent more than five minutes with a bunch of third-world prostitutes will know they’re ruthless bitches who have lied so many times they barely remember their real name. When it comes to Russian prostitutes, they became adept at telling gullible men they were well-educated and wanted to work in a normal job but had no choice but to become prostitutes in Dubai and Bangkok because of the economic hardships at home. I used to hear this back in 2003-4, then I worked out these women were not well-educated, they came from broken homes with seriously fucked-up childhoods, and simply made the choice to make some good money quickly. Again this is fair enough, but one should never forget that for every woman who chose to become  a prostitute, there are plenty who faced the same hardships but chose differently.

Now there might have been some women from Russia and Ukraine forced into prostitution, by which I mean they’re in chains and controlled by gangsters, but I I’m not convinced more than a negligible number work abroad in such conditions. Certainly this was the case when I lived in Dubai, because the girls would have talked about it. They were bound to their sponsors once they got there (as are many legitimate workers) but nobody forced them to come, or hoodwinked them. Long-time readers may remember I actually witnessed one girl being recruited for the job when I made that trip to Nizhnekamsk in 2004 in the company of another girl who knew the process rather well and, without batting an eyelid, told me everything about how it works. And as has been discussed in the comments at Tim Worstall’s on several occasions, trafficking Eastern European women for the purposes of prostitution makes absolutely no sense whatsoever: all major cities are awash with young women working voluntarily and prepared to do pretty much anything for a couple of hundred quid. Where’s the economic sense in kidnapping a woman, chaining her to a bed, and risking a lengthy jail term for people-trafficking in such a market?

What the white-knights are doing is assuming these poor Russians and Ukrainians had no choice but to become prostitutes, thereby implying any Russian or Ukrainian will turn to prostitution should the right economic conditions arise. Given these remarks appear in a thread in support of a Ukrainian woman complaining men often presume she’s a hooker, it’s rather ironic. Even more ironic is she approves of these remarks. It’s a funny place, Twitter.

The whole thing turned into a big pile-on yesterday afternoon. One person in particular took objection to being called a white-knight:

A man on the internet leaping to the defence of a woman who is “a personal friend” after incorrectly believing someone insulted her, followed by an attempt to look tough, is pretty much the textbook definition of a white-knight. Does this guy not realise he’s so deep in the friend zone that he could tweet his little fingers off all day long and still not get anywhere? His threats didn’t stop there, however:

I’m trembling so much my knees are knocking.

Some others were simply dim, chief among them this woman: 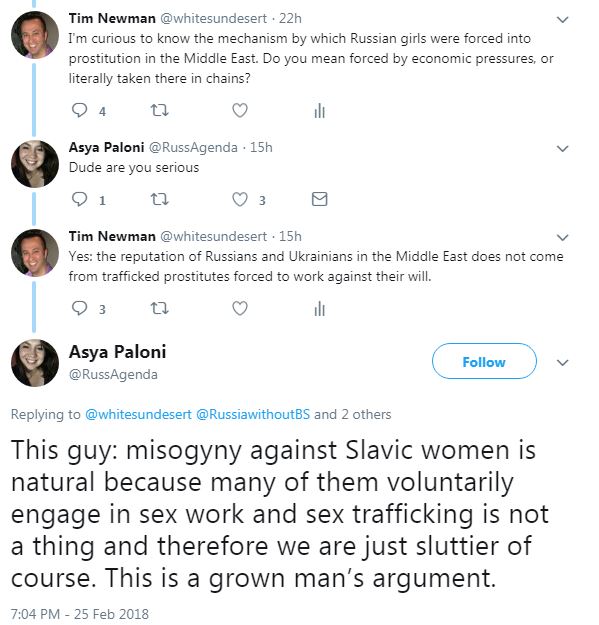 She’d give Cathy Newman a run for her money. Then white-knight pops up again:

According to Twitter, the reputation Russian and Ukrainian women have in the Middle East and elsewhere stems from women who were trafficked there, forced into prostitution against their will. If you follow the thread, we learn none of them have actually met any of these women – but from their offices in the US and Canada they have read reports and studied papers which show they have been trafficked and few are there voluntarily. How so many are free to take boyfriends and get married remains a mystery. Perhaps their pimps are the romantic sort?

Finally, given this started out with various women complaining men treat them like prostitutes, allow me to pass on some advice to my female readership. If you find men are routinely presuming you to be a prostitute, I recommend you:

1. Look at the places you are hanging out in.

2. Look at the men you are hanging out with.

3. Look at your own behaviour.

I know many women, and many Russian and Ukrainian women; very few have told me they get mistaken for a prostitute. If it’s a problem for women, it doesn’t appear to be universal.

39 thoughts on “White-Knights and Prostitutes”