A couple of months ago I had this exchange on Twitter with a lefty Irishman who I follow mainly because he is so consistently wrong on just about everything. The subject was Ronald Reagan: 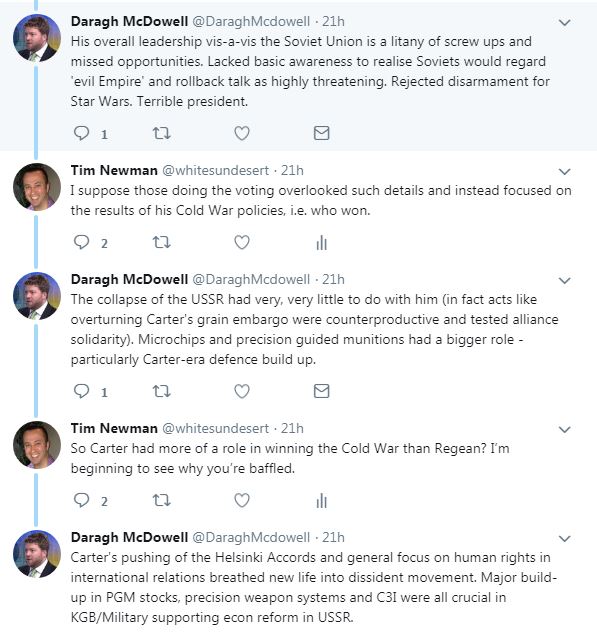 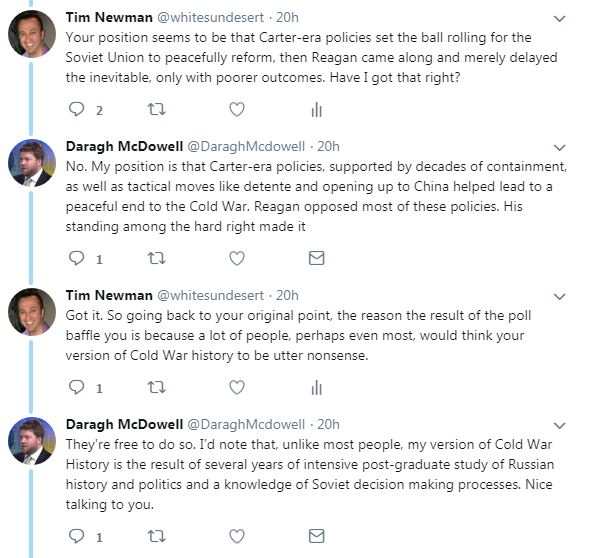 I don’t doubt this chap did engage in several years of intensive post-graduate study of Russian history and politics, but I suspect he went in with his mind made up on Reagan and no amount of evidence was going to change it. If his research really did reveal that the Soviet decision-making process which led to the end of the Cold War was based on Carter-era policies while the election of Reagan only made things worse, he’d have written a book on it, and would be lecturing history somewhere. He didn’t, and he isn’t.

The left’s re-writing of history to deny Reagan any credit for ending the Cold War is important in the context of this story:

Friday’s summit between the leaders of North and South Korea was a “historic meeting” paving the way for the start of a new era, North Korea’s media say.

The North’s Kim Jong-un and Moon Jae-in of South Korea agreed to work to rid the peninsula of nuclear weapons.

In a rare move, state-run TV and the official KCNA news agency hailed the talks and the leaders’ commitment to seek “complete denuclearisation”.

The summit came just months after warlike rhetoric from the North.

It saw Mr Kim become the first North Korean leader to set foot in South Korea since the end of the Korean War in 1953.

The two men warmly shook hands and then stepped symbolically over the military demarcation line to the North Korean side.

Firstly, let’s not get carried away. I don’t believe for one minute that North Korea has given up its nuclear ambitions and so far nothing has been agreed. But in the context of the conflict between North and South Korea, these developments are huge steps forward. Yes it might be just theatre but theatre has a certain importance, particularly when North Korea is involved, a country which is as much theatre as anything else. That the North Korean media are reporting this visit is extremely important, meaning this visit is not just for the benefit of western hawks and South Korean doves.

The two leaders said they would pursue talks with the US and China to formally end the Korean War, which ended in 1953 with a truce, not total peace.

If that happens, it will be the biggest diplomatic coup of the century thus far. So how much of this is down to Trump? Well, quite a lot. It was he who refused to bend to North Korean threats, instead responding with threats of his own with a dose of outright mockery thrown in. And it was he, thankfully via mediums other than Twitter, who put pressure on the Chinese to reign in their rogue puppy, convincing them it was in everyone’s interests to do so. Others have played their role for sure, namely the South Koreans, Chinese, and even Kim Jong-un himself, but this would never be happening without Trump. If the Korean War officially ends as a result of this, he will have pulled off a geopolitical triumph orders of magnitudes more important than Obama’s sucking up to Cuba and throwing money at Iran in a desperate attempt to secure his “legacy”.

However, you can be sure the global elites, the media, and Trump’s ideological enemies at home and abroad will do everything in their power to downplay, ignore, or misrepresent Trump’s role in whatever progress is made on the Korean peninsula from hereon. Like those who can’t bring themselves to accept that Reagan’s policies were instrumental in bringing about the end of the Cold War rather than leading to nuclear Armageddon, those who claimed Trump was recklessly endangering the world will be incapable of acknowledging he’s probably made it safer. How much safer remains to be seen, but let’s recall Barack Obama was awarded the Nobel Peace Prize for doing absolutely nothing except winning the presidency after George W. Bush. Nobody is ever going to award the Nobel prize to Donald Trump even if he permanently eliminates war and suffering by tomorrow night, but Obama could at least gift him his.

34 thoughts on “Finally, something Trump and Reagan have in common”